Notts and Leicester were paired in the third round of the FA Cup in January 1971, with the clubs leading the Second and Fourth divisions respectively.

It was thought by some who had seen Notts beat Port Vale and Bury in the first two rounds that they were probably capable of pulling off a shock.

Manager Jimmy Sirrel refused to give his thoughts away in pre-match interviews. Privately he was prepared to admit “It will really tell us how far we have come.”

As a crowd of 33,000 saw, Notts were never seriously in the game, though Leicester’s winning margin, 2-0, was modest enough. Their goals were scored by Graham Brown and Malcolm Partridge.

It was in 1978-79 when the clubs began competing again for league points. The previous season Leicester had been relegated from the First Division, having finished in bottom place, while Notts by now were well established in the Second Division.

And - at last! - Notts managed a league win over their near East Midlands rivals, with a 1-0 score in their favour in the early part of September - and away from home into the bargain! Mick Vinter scored the precious decisive goal. 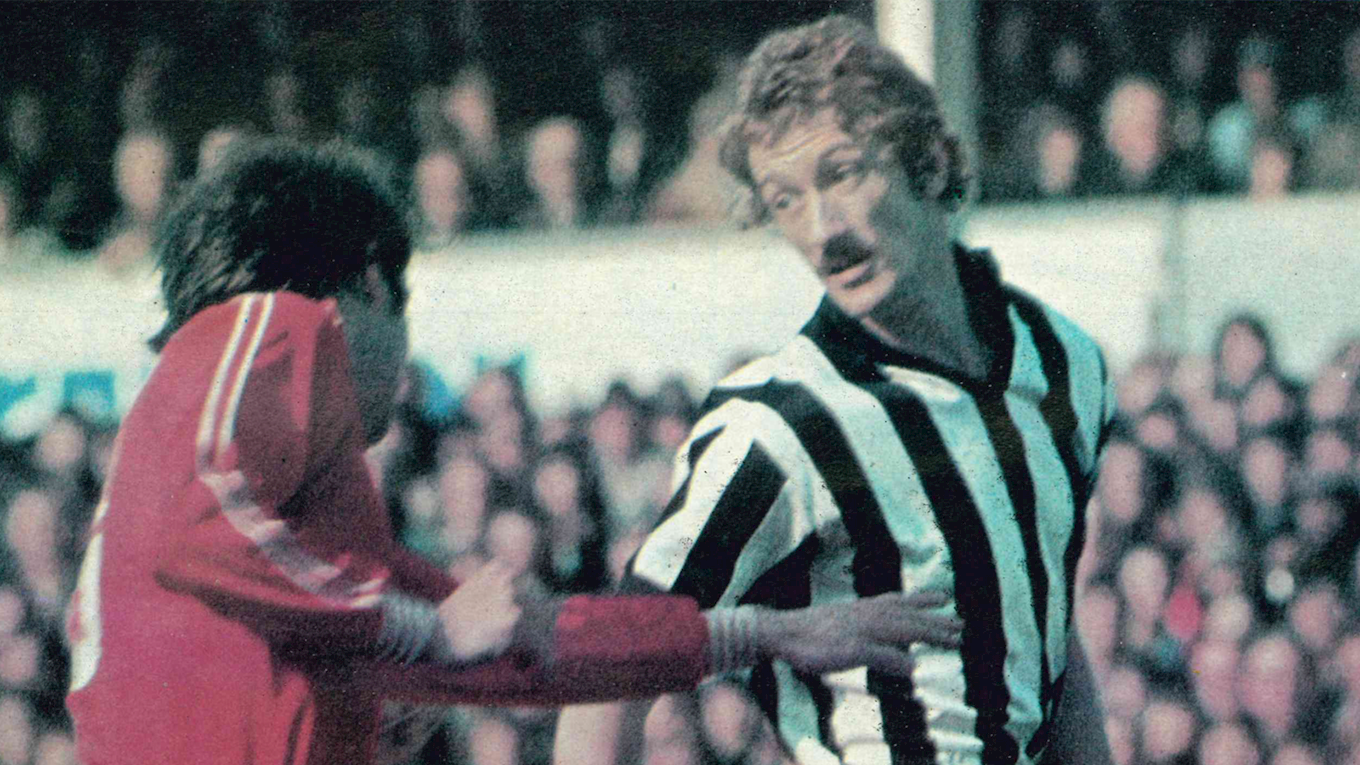 Mick Vinter in action for the Magpies

City turned the tables in the return fixture the following April, also winning by the only goal when Leicester-born Gary Lineker - far less famous than he is today - found the net.

The Foxes bounced back into the First Division at the end of that season but their stay lasted for only a year - the same season, 1980-81, Notts were promoted to the top flight after an absence of 55 years: a dream come true.

League contests were again suspended for a short while but the FA Cup brought the two clubs together in January 1983 for a third-round tie at Filbert Street. Notts triumphed 3-2 in a closely-fought game thanks to two strikes by Justin Fashanu and another by Iain McCulloch. Alan Smith and Ian Wilson hit the replies. 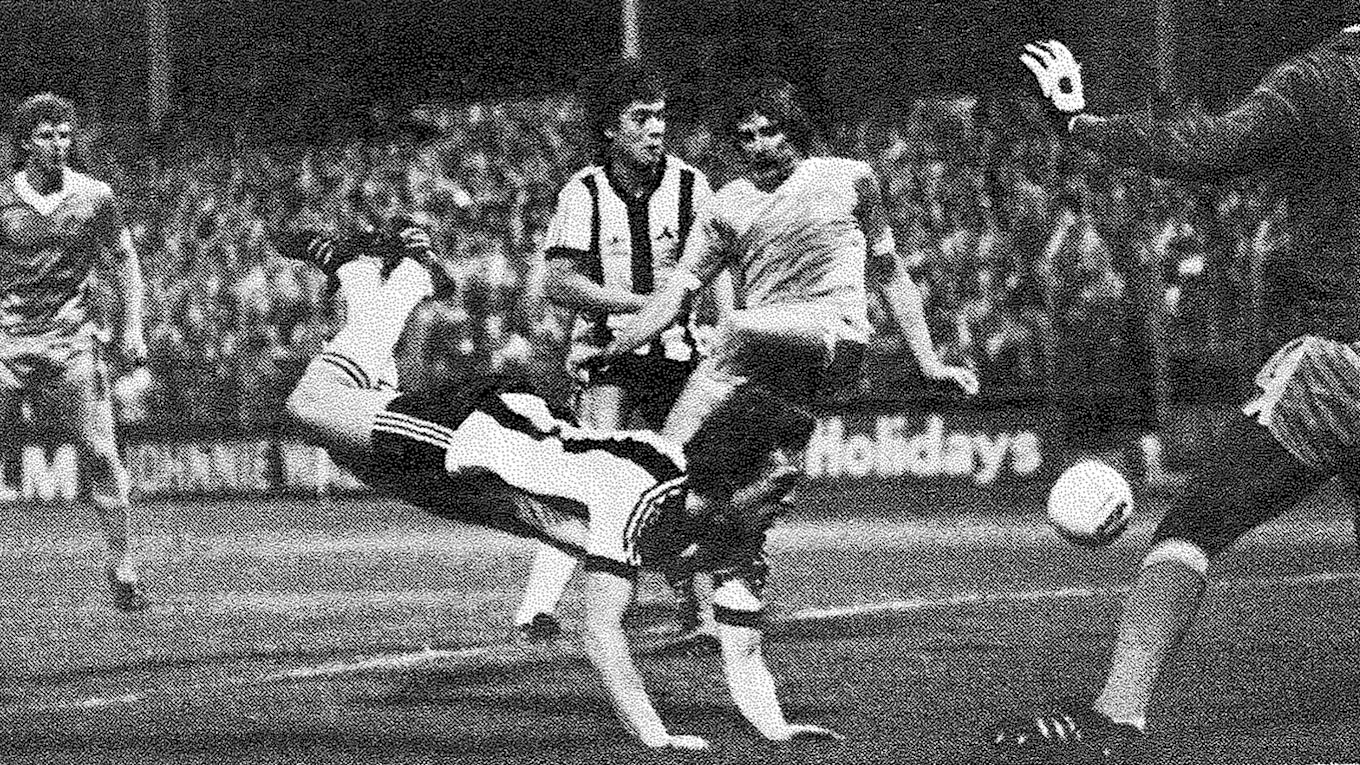 Iain McCulloch dives into the action against Man City

The first Saturday of the 1983-84 campaign offered a mouth-watering fixture, with Notts travelling to Filbert Street, backed by thousands of fans whose hopes, however optimistic, were well exceeded with a 4-0 victory to mark Larry Lloyd’s debut as manager in emphatic style, the former Forest defender having succeeded Howard Wilkinson on his move to Sheffield Wednesday.

Leicester old boy Trevor Christie was the star of the show with a superb hat-trick and Martin O’Neill secured the other to round off a great afternoon. 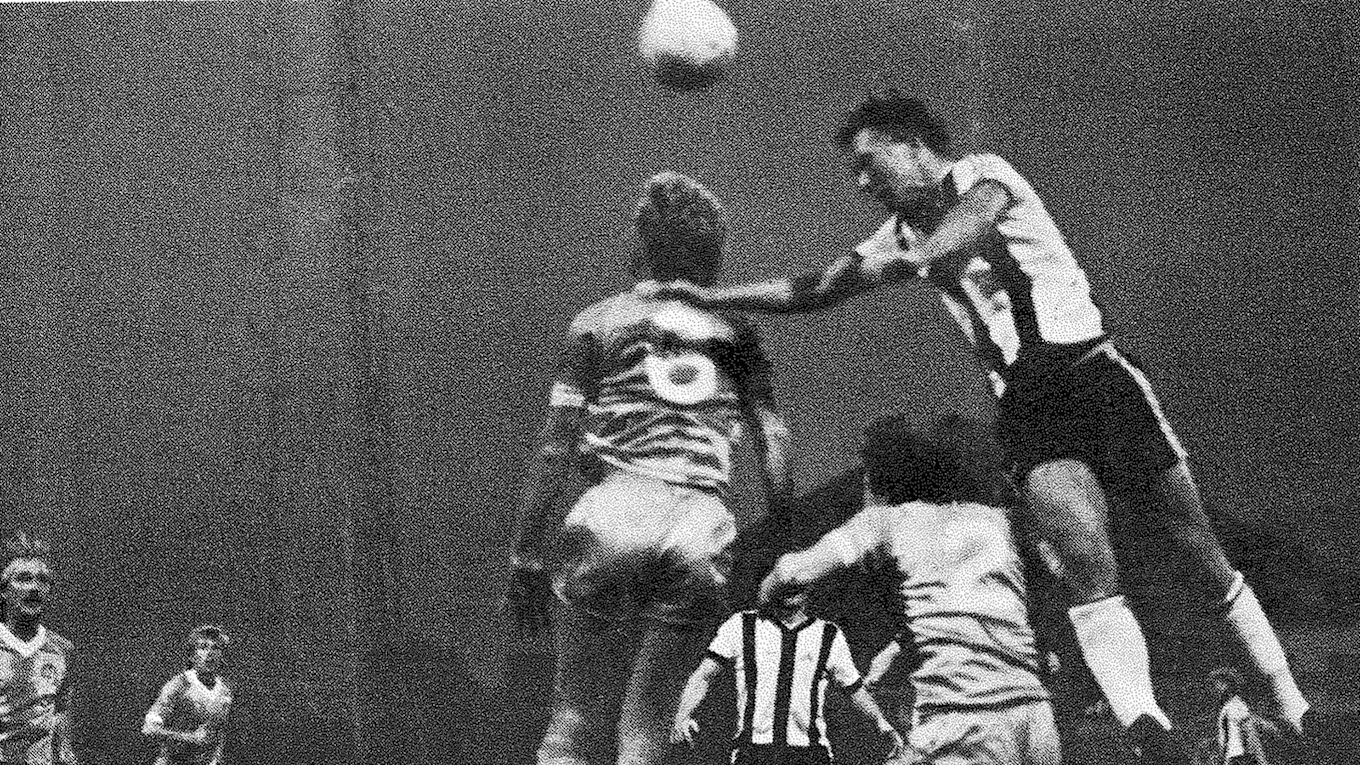 Completing a double proved beyond County, the Foxes winning 5-2 at Meadow Lane the following January. Revenge on such a scale must surely have tasted very sweet.

Notts goals by John Chiedozie and Rashid Harkouk proved inadequate to Leicester’s barrage, spearheaded by Lineker who grabbed a hat-trick with three sublime finishes, supported by goals by Kevin Macdonald and Andy Peake.

The crowd for such a feast of goals proved disappointing at 10,700.

Both games in 1992-93 ended 1-1 but the grand finale the following campaign provided performances to savour - and results to match.

After losing 3-2 at Filbert Street in October (goals by Mark Draper from the penalty spot and Gary McSwegan) the return provided an even more decisive outcome - 4-1 to Notts, with Gary Lund hitting a brace and one apiece for McSwegan and Rob Matthews. Ian Ormondroyd got City’s sole reply.

These were the last league or cup meetings between the two clubs whose rivalry extends back to 1894 - the year in which the Magpies won the FA Cup. Except, for the record, it should be added that in those far-off days City were known as Leicester Fosse.