We visit Chesterfield tomorrow in front of the BT Sport cameras for a local derby in the Vanarama National League.

We’ve been in fine form of late - six matches unbeaten in all competitions, winning our last three – and will be hoping to extend that run at the Proact Stadium.

Victory against Torquay in our last league game took us into the play-offs for the first time this campaign, and we could climb to fourth if results elsewhere work in our favour this weekend.

Chesterfield, on the other hand, are 18th in the table and could find themselves in the relegation places prior to the 5.20pm kick-off.

After a slow start to the campaign, they’ve picked up in recent weeks, though, and have won three of their last four league games.

We’ve sold out the away end and both sides are in form, so it promises to be a cracker.

“They’ve won their last two league games but we want to get three points and keep working towards the top of the table.

“Chesterfield will want to play football like we do – getting midfield players on the ball and the full backs to go forward.

“It’s similar to us so it’s about performing how we can and who wins the contest in both boxes.

“It’s another chance for us to get three points and it’ll be fierce, so we’ll have to keep battling like we have recently.” 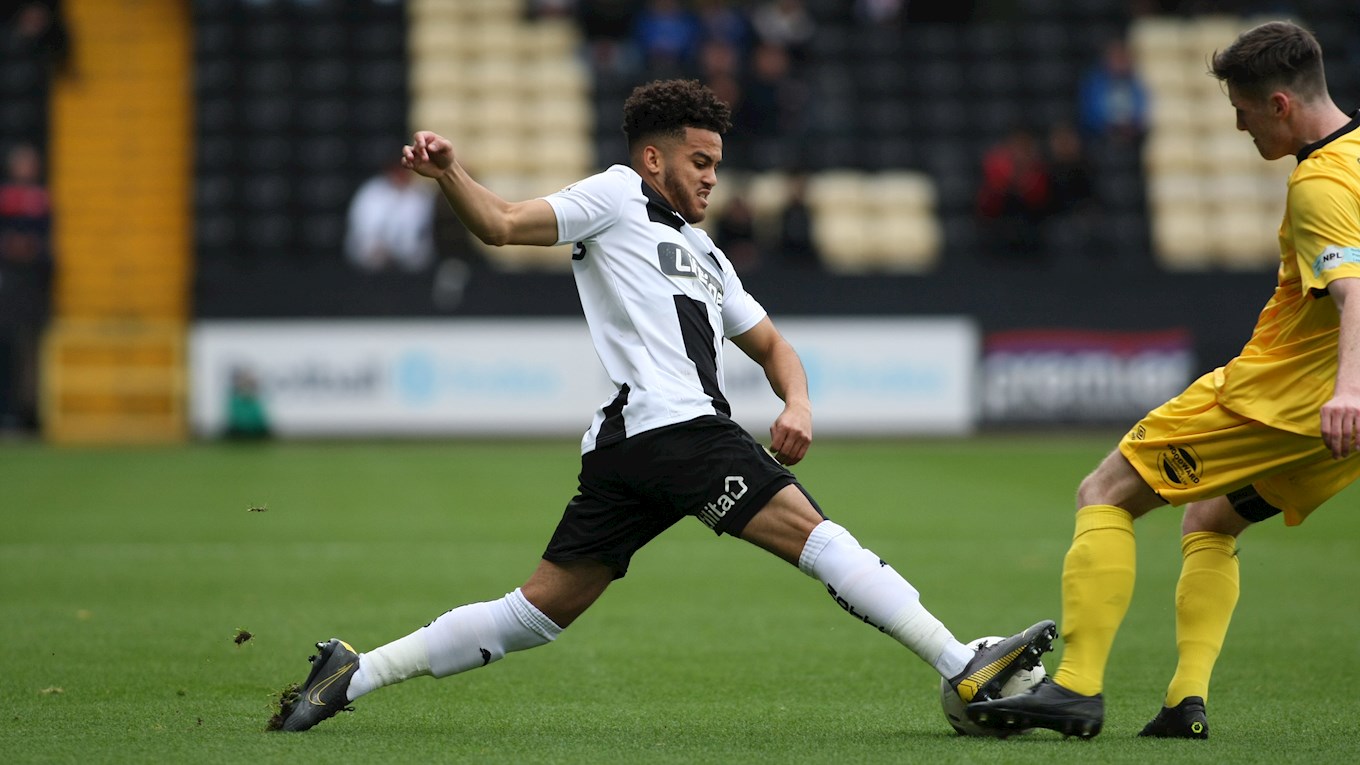 With the exception of long-term absentee Jim O’Brien, Cox reported a clean bill of health when he met the media on Thursday.

Richard Brindley will hope to return to the starting line-up having dropped to the bench at the expense of Dion Kelly-Evans for the FA Cup win over Belper last week, while Mitch Rose will be in the same boat.

John Sheridan made six changes for Chesterfield’s cup clash with Wrexham last week and, following a defeat, may shuffle the pack once again.

Top scorer Mike Fondop-Talom was an unused substitute last time out and will hope to be included in the starting XI.

Our last away win against the Spireites came in October 2011, when Ben Burgess and Alan Judge were on target before Craig Westcarr – who left us that summer – pulled one back, only for a Drew Talbot own-goal to complete the scoring and hand us a 3-1 victory.

Our most recent meetings came in League Two during the 2017-18 season, with Jorge Grant netting a brace as we were 2-0 winners at Meadow Lane, before we were beaten 3-1 at the Proact Stadium, where Kristian Dennis was on target for Chesterfield. 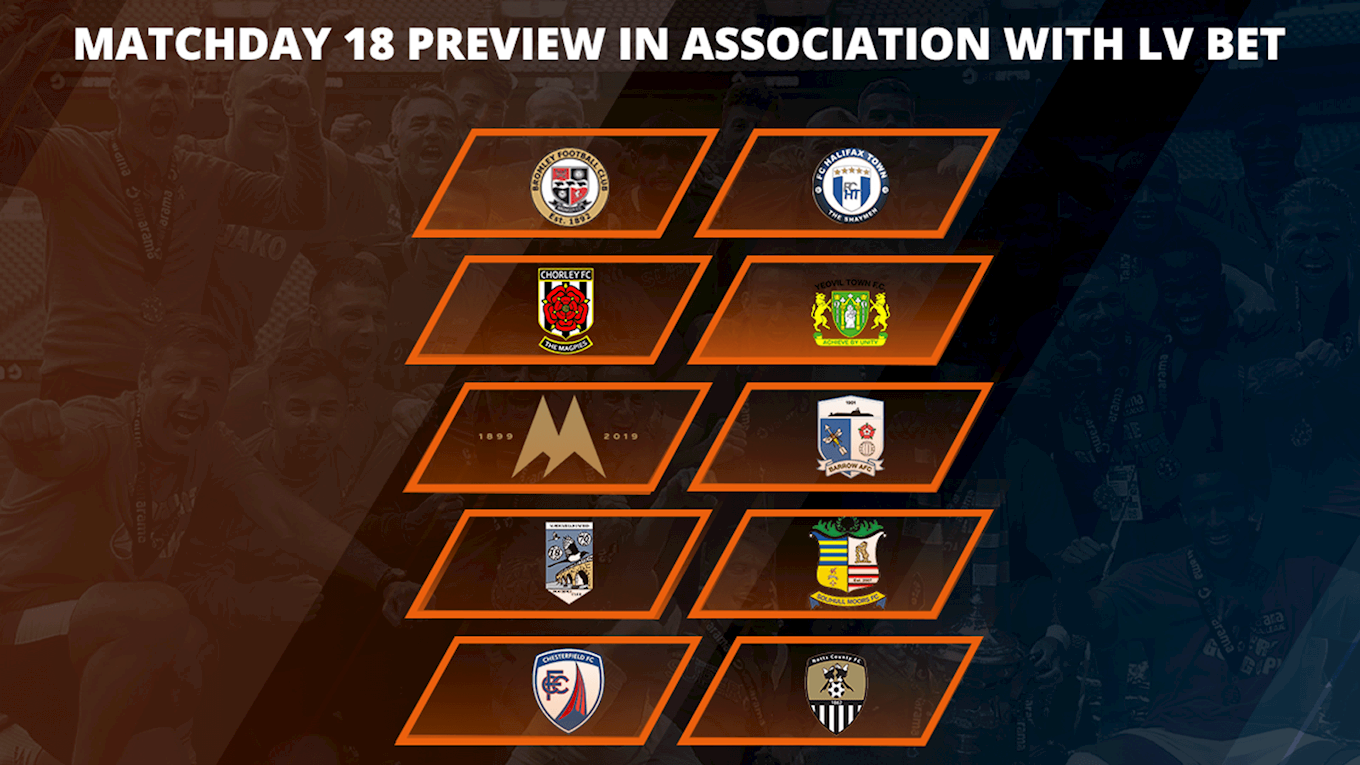 LV BET, the National League’s official betting partner, highlight the pick of the fixtures this weekend...

The top two face each other on Saturday but both come into the game on the back of defeats.

FC Halifax Town are above Bromley by virtue of goal difference and boast the division’s best defensive record, conceding just 16 goals so far this season.

Bromley have lost three of their last four matches after opening the campaign with a 13-game unbeaten run.

A win for third-placed Yeovil can take them to the top of the table if Bromley and FC Halifax Town draw on Saturday.

The Glovers have scored 29 times so far this campaign – a tally not bettered by anyone in the division.

Having only won one match all season, Chorley are second bottom, but they have drawn each of their last four fixtures and 10 of their 17 games to date.

Three wins from their last four matches have lifted Torquay up to eighth in the table and just two points off the play-offs.

Along with Yeovil and their opponents, Barrow, the Gulls have scored a league-high 29 goals so far this campaign.

Barrow are the form side in the division and are bidding to make it eight consecutive wins in the National League, with their last defeat coming against Hartlepool United on 3 September.

Maidenhead ended a run of four league defeats when they beat Ebbsfleet United last time out, with top scorer Daniel Whitehall netting his seventh of the season.

Nine points from a possible 12 have lifted Solihull Moors to sixth in the table and they’ve conceded just 18 goals to date. 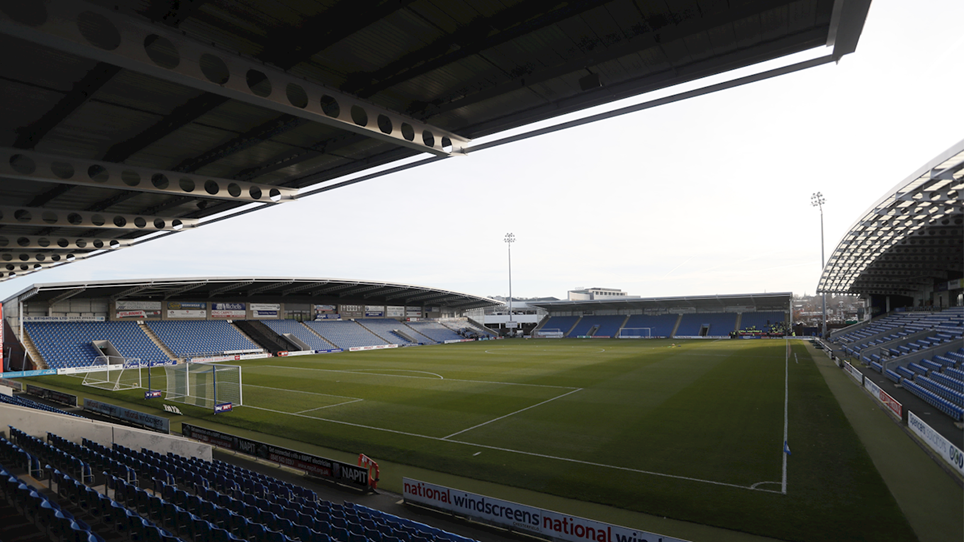 Our six-match unbeaten run came to an end as we slipped to a 1-0 defeat at Chesterfield on Saturday evening.

We had the majority of the ball throughout the encounter and created the better opportunities, but were beaten in front of the BT Sport cameras courtesy of Gevaro Nepomuceno's strike shortly before the half-hour mark.

Neal Ardley made three changes to the side that progressed in the Emirates FA Cup with victory over Belper Town seven days ago. One of which was enforced, with Connell Rawlinson suffering a calf injury during the week and he was replaced by Zoumana Bakayogo as Damien McCrory moved into centre half alongside Ben Turner.

Richard Brindley regained his place on the right side of defence, while Mitch Rose also came back in to partner Michael Doyle in the middle of midfield. Dion Kelly-Evans and Regan Booty dropped to the bench.

Sean Shields had a shot deflected behind in the first real chance of the game after eight minutes and, within two, a well worked set piece almost led to the opener.

The winger took it and, after playing a one-two to change the angle, bent the ball into Kyle Wootton, who climbed highest to meet the delivery. His header looked goal-bound but a recovering defender got himself in the way before our hosts smuggled the ball behind.

We were looking the more likely to make something happen, with Rose and Kristian Dennis both shooting off target from range as we probed for the game's opener.

On 23 minutes, Wootton went as close as anyone had. He spun his man with a fantastic turn after receiving the ball into his feet from Bakayogo and drove towards goal before checking back onto his right foot. He then tried to bend a shot around his man and into the far corner but narrowly missed the target.

Dennis called Shwan Jalal into action moments later after receiving the ball from Enzio Boldewijn inside the area. He struck low across goal but the keeper got down well to make the save and held on at the second attempt.

With 27 on the clock, Chesterfield took an undeserved lead. The home side had barely had a sniff until, on a rare foray forward, Scott Boden found space to cross from the right wing and pick out an unmarked Nepomuceno, who volleyed past Sam Slocombe at the back post.

The goal did little to alter the pattern of the game and we continued to dominate possession and look the more likely to trouble the scorers next, but the final ball was lacking and much of the remaining period before the break passed by with little to note.

Just before one minute of added time was indicated, Chesterfield broke with pace as we pushed men forwards in search of an equaliser but Boden blazed high and wide, and we went into the break a goal behind.

Attacking an away end packed out with 1,422 travelling supporters, we looked to restore parity early in the second period and Boldewijn had a shot well blocked before Brindley sent a long-range free-kick over within 10 minutes of the resumption.

Joe Rowley capitalised on a loose pass from Bakayogo to drive down the Chesterfield right before shooting from just inside the area, but Turner had tracked him all the way and made a good block to divert the ball behind.

On 62 minutes, the Spireites thought they had doubled their lead when Will Evans headed a looping cross beyond Slocombe, but the flag was raised against their skipper.

As the hosts reacted to the decision, we launched an attack and Shields' cross found its way to Brindley beyond the back post, but his volley was deflected behind. Jalal did well to claim the resultant corner as McCrory tried to turn home.

The boss looked to his bench on 65 minutes and replaced Dennis and Bakayogo with Wes Thomas and Booty, who slotted in on the left side of defence.

It was the man on the opposite side of the back four who was next to go close. When Boldewijn's 70th-minute cross was headed away, Brindley retrieved the ball and came inside onto his left foot to shoot and almost caught Jalal off-balance but he made a good save and held on, too.

Boldewijn saw a well-struck volley blocked after Rose's long throw was headed away but Chesterfield were proving difficult to break down and Ardley turned to his substitutes again with four to play, sending Nathan Tyson on for Shields and going for broke with three men up front.

Two minutes were added on, during which Tyson saw an effort deflected behind and Rose headed wide from a corner, but there was to be no equaliser and we lost for the first time since 21 September.

Away tickets for this weekend's televised trip to Chesterfield have completely sold out.

No tickets will be available on the day and supporters should not travel without one.

Official away travel is also sold out for this fixture.

Supporters who have already purchased travel are advised coaches will depart from near the club shop on Meadow Lane at 3.15pm. Our club shop and ticket office will remain open until 3pm.