Nearly 1,000 Notts fans will pack out the away end this afternoon as we take on Solihull Moors.

The West Midlands outfit occupy fifth place going into the match but, with us only two points behind them, a victory would see us leapfrog them and potentially end the day in the play-off places.

While Tim Flowers' side may be flying high, they're yet to taste victory this month and will be determined to enter 2020 on a positive note.

We, meanwhile, come into the match in fine form having dispatched Chesterfield (FA Trophy), Halifax and Maidenhead in our last three matches - scoring eight goals in the process.

Long-term absentees Ben Turner and Jim O'Brien will continue their stint on the sidelines, while Neil Cox revealed on Friday that the game is likely to come too soon for Regan Booty and Sean Shields.

Dion Kelly-Evans will be hoping to keep his place at right back after Richard Brindley was given a break from starting action on Boxing Day and young winger Sam Osborne will also be keen to continue after bagging his second goal of the season in the same match.

Squad rotation could well be the order of the day for both sides, however, having played their last match only two days ago and facing their next on New Year's Day. 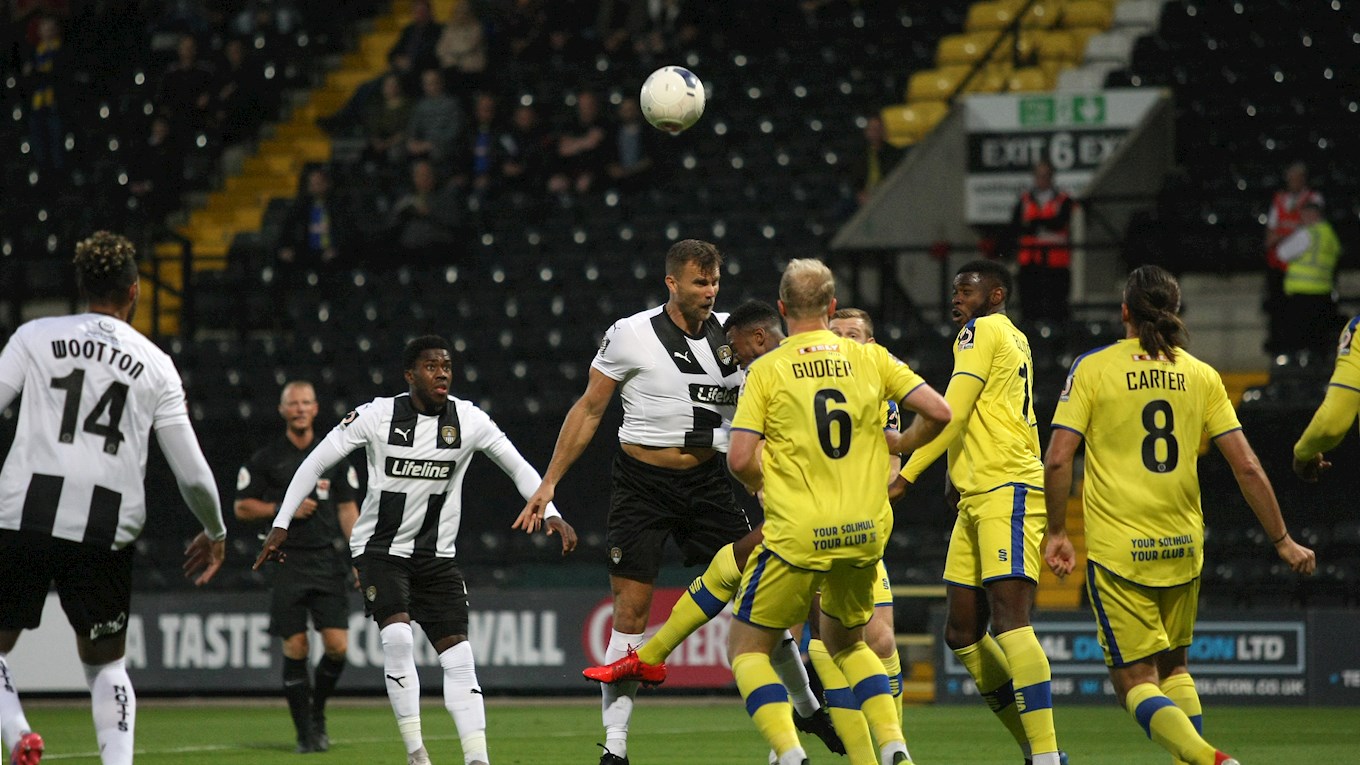 September's reverse fixture was the very first meeting of the two sides - and it wasn't particularly memorable, finishing 0-0!

We recorded our fourth consecutive victory and returned to the Vanarama National League play-off places with a hard-fought 1-0 win away to Solihull Moors.

Wes Thomas grabbed the headlines, tapping the ball home at the back stick to send the sold-out away end into raptures in the second half.

But Mitch Rose and Sam Slocombe can both lay claim to hero status, too, after making fine interventions in the dying moments of a close, cagey afternoon in the west Midlands.

With less than 48 hours of recovery time after the Boxing Day victory against Maidenhead United, Neal Ardley freshened things up as he looked to secure a third straight Vanarama National League win over the festive period.

Sam Osborne and Kristian Dennis - both on target two days earlier - dropped to the bench, as did Damien McCrory and Enzio Boldewijn. In came Nathan Tyson, Thomas, Zoumana Bakayogo and Tom Crawford - the latter for his first start of the campaign.

The changes also saw us adopt a new formation as Ardley chose to match up to the hosts' 4-3-3 system.

On eight minutes, the first opportunity of the day fell to Solihull when Jamey Osborne picked up the second ball after a punt forward and nipped past a pair of defenders before shooting wide of Slocombe's goal on the volley.

Shortly after Rose saw a long-range effort deflected behind, his long throw broke for skipper Michael Doyle to hit on the volley but his strike was well blocked inside the Moors area in the last action of a cagey opening quarter-of-an-hour.

The hosts are known for their direct style of play and Paul McCallum was almost a beneficiary on 19 minutes when he latched onto a flick-on, but he got well under the bouncing ball as Slocombe came out to meet him.

Our own big forward, Kyle Wootton, had the next sighter of the afternoon, meeting Doyle's cross from the left following a short corner. The striker couldn't keep his diving header down under pressure, though.

There was a similar outcome for Osborne when he tried to catch Slocombe out with a quickly-taken free-kick from 40 yards. The back-pedalling keeper was relieved to see the ball drift over his crossbar.

Much like at Meadow Lane in September, the number seven was providing most of Moors' threat and, when the hosts kept their attack alive after we initially cleared a set piece, he found space to shoot from the edge of the area shortly after the half-hour. His effort went straight down Slocombe's throat, who gratefully held on.

Solihull skipper Kyle Storer suffered a foot injury after colliding with Wes Thomas and that led to two minutes being added on at the end of the half, but no further chances were created in the opening period and the sides returned to the dressing rooms level.

There were no changes for either side at the break but, eight minutes after the restart, our former winger Terry Hawkridge replaced Osborne for the hosts.

And very little else happened before Boldewijn and Osborne came on for Tyson and Crawford on 69 minutes.

Boldewijn, who claimed two assists on Boxing Day, set about making an immediate impact by supplying Wootton from the left. The forward laid the ball off for Thomas, who could only curl it wide from just outside the area.

Thomas wasn’t to be denied his goal, however, as moments later Wootton robbed Hawkridge of possession down the left before poking a low cross to the back stick for his team-mate to turn home.

We almost made it two shortly afterwards when Osborne led a quick counter attack before passing to Thomas, whose low cross caused chaos in the middle. The ball eventually settled for Rose, whose snapshot was parried by Ryan Boot in the Moors net.

Boot’s opposite number, Slocombe, entered the book for taking his time over a goal kick as the game entered its final 10 minutes of normal time.

Thomas then made way for Pierce Bird as Ardley added some extra protection in his backline.

And it was a case of all hands on deck towards the end of the match as the hosts cranked up the pressure, forcing Rose into a brilliant goal line clearance before, inside four minutes' added time, Slocombe produced an excellent save to deny Danny Wright who had volleyed the ball goalwards inside the area.

And those defensive heroics proved enough for us to stave off the threat of a comeback as we leapfrogged our hosts into sixth place in the table.

Tickets for our Vanarama National League trip to Solihull Moors on Saturday 28 December have sold out, with no further tickets available.

Tickets will not be available on the day, so please do not travel without a ticket.

In line with Solihull Moors’ policy, tickets for supporters with a disability and their personal assistants are available to those claiming Disability Living Allowance at the middle/higher rate (or PIP advanced rate).

Ambulant disabled supporters should obtain tickets in advance from our ticket office. They are priced at the appropriate age-related rate for the disabled supporter with a personal assistant ticket issued free of charge. Please note that these are not available to purchase online.

Tickets for wheelchair-disabled supporters are to be purchased through Solihull Moors directly, in advance of the game. Please contact 0121 705 6770 and select option 2 for the ticket office.

Official away travel will depart from near the club shop on Meadow Lane at 1pm.