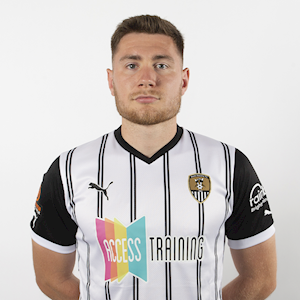 We paid an undisclosed fee for the services of Gateshead’s free-scoring front man Cedwyn Scott, who signed a two-year deal this summer.

The 23-year-old became the second prolific forward to join us from the Tynesiders this summer following the arrival of Macaulay Langstaff.

Together the pair fired Heed to last season’s National League North title, Scott notching 24 league goals and Langstaff 28 as they wrote their names into the division’s Team of the Season.

Hailing from Hexham, near Newcastle, Scott began his career as a trainee at Huddersfield Town and, after bagging 21 goals in 26 games for their Under 18s, left them in 2018 to join Dundee.

He hit the ground running north of the border, proving prolific for their development side and being named on the bench for the first team’s SPL trip to Rangers before making his professional debut away at Motherwell.

Two further SPL appearances followed before the season was out and in 2018-19 he joined Division Two side Berwick Rangers on loan, bagging a brace on his debut and finishing his spell with four goals in eight games.

He completed the season with League One outfit Forfar Athletic before retuning to his native north-east by joining Dunston UTS ahead of the 2019-20 campaign.

His goalscoring form then earned him a move to Northern League side Hebburn Town and a sensational start to the 2020-21 season led him to spending four weeks on trial at Newcastle United, and then Carlisle.

He did enough to earn a short-term deal with the Cumbrians before joining Gateshead last summer, scoring 26 goals in 50 appearances over the course of an incredibly successful and memorable campaign.