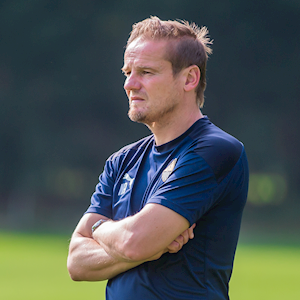 Ardley joined us in November 2018 shortly after ending a six-year spell in the AFC Wimbledon dugout.

He arrived at Meadow Lane with experience of saving the Dons from relegation to the National League on the final day of the 2012-13 season before taking them into League One via the play-offs three years later.

And it was hoped he would be able to prevent us from dropping into non-league for the first time in our history when he arrived as our third manager of the 2018-19 season following the departures of Kevin Nolan and Harry Kewell.

Despite a spirited battle, however, we suffered relegation on the final day and, following the takeover of Chris and Alex Reedtz, Ardley was charged with the task of stabilising the playing side of the club and plotting our return to the EFL.

The boss oversaw a huge turnover of players in his first summer at the helm and, after an understandably difficult start to the campaign, he led us into third place and the semi-finals of the Buildbase FA Trophy before March 2020's coronavirus lockdown.

With the regular season brought to a premature end and the league table decided on a points-per-game system, Ardley guided us past Barnet in the play-off semi-finals before being denied in the Wembley final by Harrogate Town, who also claimed victory over us in the Trophy semi-final which was eventually played following the commencement of the 2020-21 campaign.

Ardley was the third longest-serving manager in England’s top four divisions before he amicably departed Wimbledon, with Dons chairman Erik Samuelson describing him as a ‘clear thinker, superb man-manager and fine coach.’

Ardley was also a loyal servant to the London outfit during his playing days, spending more than a decade at their then-Selhurst Park home before rounding off his career with spells at Watford, Cardiff and Millwall.