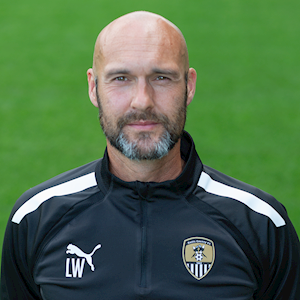 Prior to accepting the role he had most recently been assistant head coach to Russell Martin at Swansea City, while he also had experience as a head coach from his time at Swindon Town.

After a promising youth career was curtailed by injury at 20, Williams turned his hand to coaching.

His first major role came in the form of a three-year spell as Brighton and Hove Albion Under 21s manager, which led to his appointment as Mark Cooper’s assistant at League One side Swindon in 2013.

The pair led the Robins to the play-off final in 2014-15, losing out to Preston North End, and Williams continued in his role alongside interim chairman-manager Lee Power and then Martin Ling following Cooper’s departure.

Ling resigned in 2015, opening the door for Williams to take the caretaker manager’s role – an opportunity he grasped with both hands as, following an excellent run of results, he was handed a five-year contract as the club’s head coach with Power declaring him a ‘fantastic coach’ who was ‘the best I’ve come across in 25 years.’

Unfortunately, however, Williams’ control over footballing affairs was limited by the club’s deployment of a director of football and Swindon found themselves in a relegation battle which resulted in the club dropping into League Two and the mutual termination of Williams’ contract.

Williams made an immediate return to work by becoming head coach of Bristol City’s Under 23s, with then first-team manager Lee Johnson and chief executive Mark Ashton both lauding the reputation Williams held within the game as an excellent coach.

Two years later, Williams teamed up with the newly-appointed Martin as his assistant at MK Dons before following him to the Championship when the Swans came calling.

Williams left that role in February due to personal reasons but is now looking forward to the challenge with us.