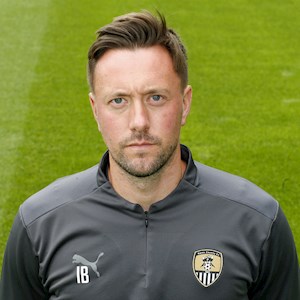 Burchnall joined us as head coach in March 2021, bringing with him eight years’ experience working in the Scandinavian top tiers and a reputation as one of football’s most exciting young coaches.

Possessing a background in youth coaching, Burchnall’s first senior role came as Brian Deane’s assistant at Norwegian side Sarpsborg in 2012. He then took the same job at Viking FK, paving the way for him to become their manager in 2017.
Off-field issues led to his departure, much to the disappointment of Viking’s supporters, but he was quickly invited to move across the Swedish border to replace now-Brighton manager Graham Potter at Ostersund FK.
Potter had led the club on a meteoric rise through the Swedish football system, culminating in the club’s remarkable qualification for the Europa League, and Burchnall, who had previously worked with Potter while coaching university football in Leeds, was chosen as the man to fill his boots.
Despite the club’s decision to sell numerous key players, Burchnall led Ostersund to a sixth-place finish, one point and a place below the record set by Potter the previous year.
His second season began strongly before off-field problems emerged once again, eventually leading Burchnall to leave his post to pursue his next opportunity in the UK.
That proved to be at Meadow Lane where, after a challenging start, he soon implemented an exciting playing style which also delivered results as we went on to reach the semi-finals of the play-offs, where we were edged out by beaten finalists Torquay United.