Goals in a rampant first half from Enzio Boldewijn and Elisha Sam plus a late strike from Jimmy Knowles earned us a convincing victory against high-flying Wealdstone at Meadow Lane.

The deficit would have been greater had it not been for Harry Isted, whose inspired performance gave his side a glimmer of hope going into the interval.

But the joint-second highest scorers in the division were unable to break us down and Knowles' strike off the bench added deserved gloss to the scoreline.

With no Cal Roberts due to an ongoing injury problem, Neal Ardley made two changes to the side that emerged victorious on a dramatic day in Chesterfield.

Ruben Rodrigues, who notched a goal and an assist in injury time at the Technique Stadium, joined Sam in coming into the starting XI. Jim O'Brien dropped to the bench.

And Rodrigues would go on to have a tremendous first half after claiming the game's first shot inside the opening minute with an effort which was deflected over by a defender.

It was a sign of things to come for the London outfit, who had Isted to thank in the fifth minute for an incredible double save - first tipping Sam's sweet strike on to the bar before quickly getting to his feet to scoop Kyle Wootton's follow-up header over when the ball looked destined for the net.

Shortly after Boldewijn had sent a free-kick wide of his near post, Istead was in action again when Rodrigues superbly controlled Michael Doyle's lofted pass on his chest before seeing his effort saved low down.

Rodrigues had made a bright start to the match and nearly supplied Sam with a tremendous low cross to the back post, only for Michee Efete to make an excellent defensive intervention.

A minute later, the Portuguese threaded a superb pass into the area for Boldewijn but Isted was quick off his line to force the Dutchman to run the ball out.

We'd only have to wait another minute for our thoroughly deserved opening goal, however, as superb forward play from Wootton presented Rodrigues with another shooting opportunity. Isted could only parry the playmaker's effort and Boldewijn was first on the scene, producing an excellent finish into the bottom corner.

It was 2-0 moments later - and this time thanks to a brilliant piece of individual skill from Sam, who nutmegged an opponent near the byline before finishing expertly across goal from a tight angle.

Wealdstone reminded us of their threat on 21 minutes when Jacob Mendy beat Sam Slocombe to a bouncing ball in the penalty area, nodding it into the danger zone only for us to eventually see out the threat.

But it was Slocombe's opposite number, Isted, who was grabbing all the headlines for the visitors as he was called upon to make another excellent double save - denying Sam before blocking another Rodrigues shot.

The game quietened down as half-time neared but there was still time for Isted to prove Rodrigues' nemesis once more, saving his 38th-minute effort after Boldewijn had done superbly to beat his man and cross from the right.

We showed no signs of slowing down in the second half as Ben Turner nodded the ball narrowly wide shortly before Wootton saw an effort deflected behind.

Rodrigues then carved out another opportunity for himself, winning the ball high up the field to go two-on-one with a defender alongside Wootton. Rodrigues opted to shoot but sent the ball straight at Isted.

Two minutes later, Turner had three half-chances to score in quick succession, first stretching well to meet Doyle's corner but failing to guide the ball on target. It was kept alive in the area and came back to the big defender, who saw a shot blocked before scuffing the ball wide on the follow-up.

Substitute Dennon Lewis had a rare sight of goal for the visitors on 63 minutes but seemed to get caught in two minds when he reached our area, trying to find a team-mate at the back post but instead sending the ball out for a goal kick.

Our first change followed as a somehow-goalless Rodrigues made way for O'Brien, and the Scot made a good impact - first seeing a shot blocked before, minutes later, bursting into the area to present Wootton with a chance to score only for Isted to come quickly off his line to close him down.

That was Knowles' cue to replace Sam and, with his first touch, he put the game to bed when he finished off a selfless lay-off from Wootton after we had pressured the visitors into a mistake high up the field. 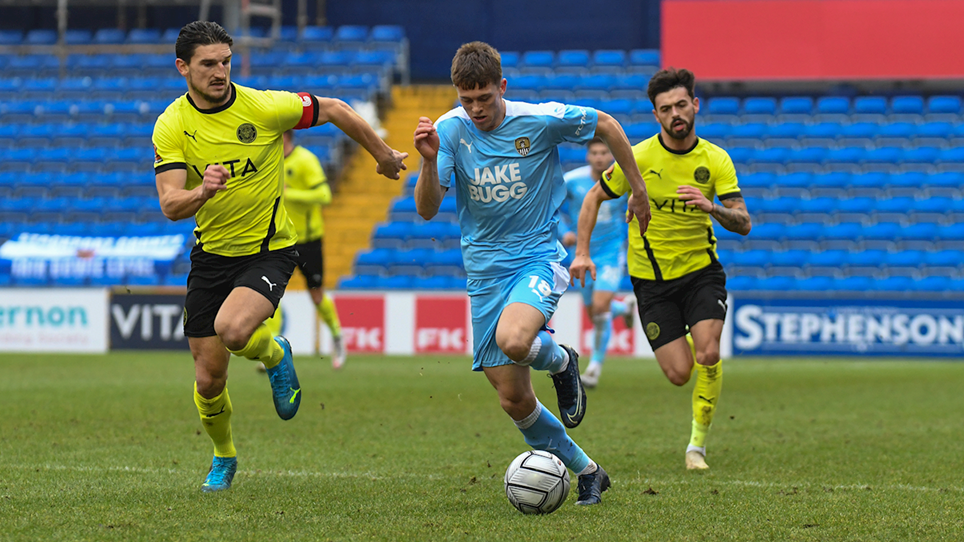 
Goals from Jimmy Knowles and Kyle Wootton were enough to earn victory over Stockport County in the fourth round of the Buildbase FA Trophy. 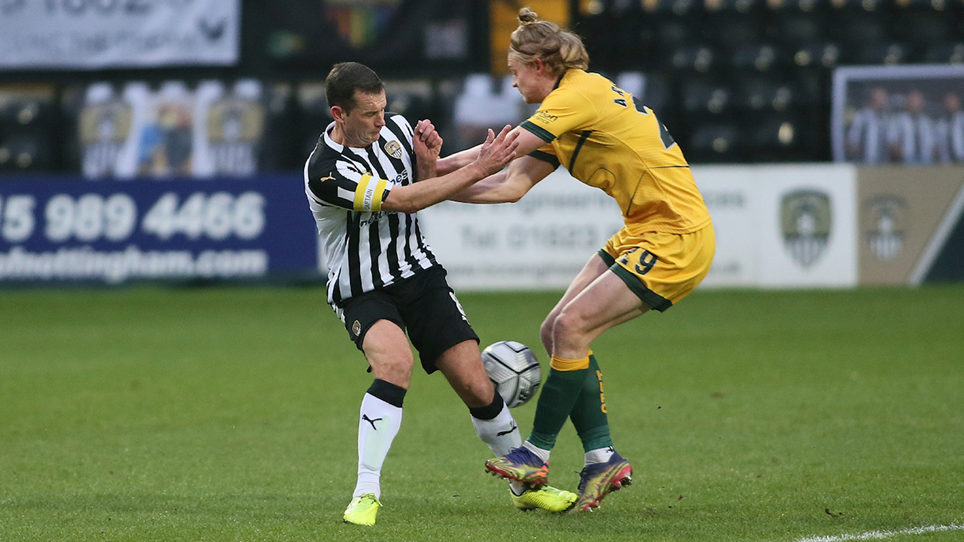 
Luke Armstrong's close-range finish was enough to earn Hartlepool the three points despite our dominance at Meadow Lane. 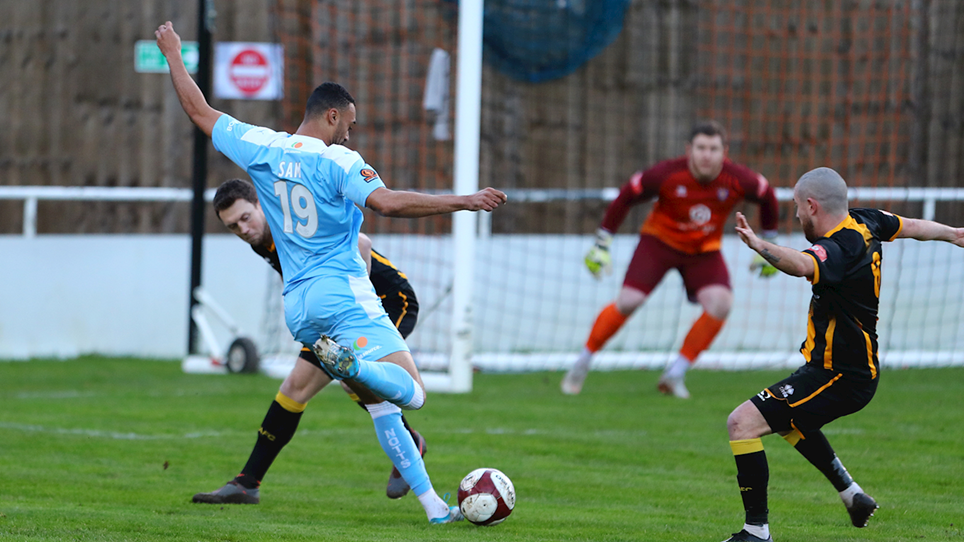 
We progressed to the fourth round of the Buildbase FA Trophy with a 3-0 win over Morpeth Town. 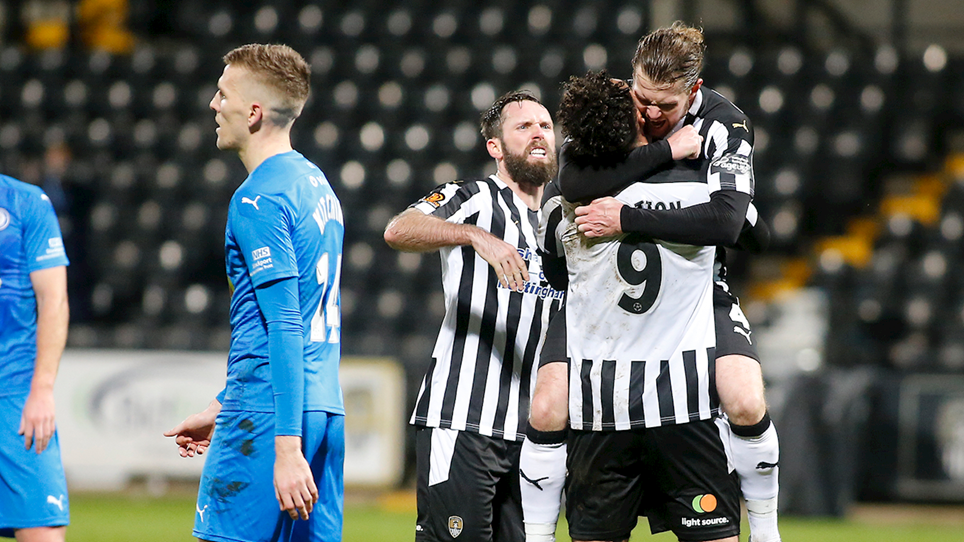