A clinical finish from Kristian Dennis and a magical moment from Cal Roberts booked our first trip to Wembley since 1996 as we beat Barnet 2-0 in a behind-closed-doors National League play-off semi-final.

Despite a lengthy lay-off due to the coronavirus lockdown we produced a superb display which belied our lack of match practice.

Dennis got the show on the road when his poacher’s instincts helped him meet Jim O’Brien’s sweet left-footed cross to nod the ball low beyond former Magpie Scott Loach.

And our spot at the national stadium was secured after the break when Roberts weaved his way past several opponents in the penalty area before producing a calm finish.

Prior to the lockdown, our boss Neal Ardley had led us on a superb run of form despite continuously changing his team and approach in order to deal with a busy fixture schedule.

And more eyebrows were raised when Connell Rawlinson and Enzio Boldewijn, both outstanding performers throughout the 2019-20 campaign, were left on the bench by the boss as fit-again Ben Turner and O’Brien were instead given the nod.

Sam Slocombe was back between the sticks in place of Joe McDonnell, with Wes Thomas, Dion Kelly-Evans and Tom Crawford joining the former Wimbledon keeper, Rawlinson and Boldewijn on the bench.

After a cagey start we soon began to assert our dominance and nearly had a 13th-minute lead when Roberts bent a free-kick towards the bottom corner, only for Loach to push the ball to safety.

The Geordie winger clearly had fire in his belly as, moments later, he produced a sublime backheel to supply Michael Doyle in space. The Irishman couldn’t keep his long-range effort down.

Torrential rain threatened to put a dampener on the rest of the half and when Kyle Wootton’s 33rd-minute looping header dropped a couple of yards wide of the post it looked increasingly likely that the two teams would be heading back to their respective dressing rooms – Barnet’s in the Family Stand for social distancing purposes – on level terms.

But O’Brien had other ideas as he shrugged off an opponent down the left with a lovely drop of the shoulder before whipping in a superb cross for Dennis to nip in between two defenders and nod the ball down on to the slick surface and into the net.

It really should have been 2-0 before the break when Roberts squandered a golden opportunity after latching on to Wootton’s flick-on in the area, dragging the ball wide of the far post to leave the Bees still within touching distance as the referee sounded his half-time whistle.

Drier conditions greeted the players when they returned to the field for the second half and Barnet nearly drew level with their first meaningful shot of the game as Ephron Mason-Clark unleashed a powerful strike towards the top corner only for Slocombe to deny him with an acrobatic save.

But the wind was still very much in our sails and, after Rose had seen a shot blocked and Loach had made an excellent double-save from Dennis, our lead was doubled thanks to a moment of sheer class from Roberts, who displayed incredible balance and close control to breeze past three defenders before slotting the ball home on the angle.

Roberts nearly made it three with a well-struck free-kick which whistled narrowly wide of the post before he wrote his name into the book for a physical challenge on David Tutonda.

Barnet were on the ropes and they musn’t have been happy to see Boldewijn introduced with 15 minutes to play as Dennis made way.

And, shortly after Harry Taylor had made a superb last-ditch challenge to deny Wootton a clear goalscoring opportunity, Boldewijn had a half-chance to get his name on the scoresheet when Roberts picked him out at the back post from a free-kick. The Dutchman couldn’t quite leap high enough to keep his header down.

Alfie Pavey missed a header of his own at the other end before Thomas, a late sub for Roberts, cut in from the left and fired an effort narrowly over.

And that was to be the last of the action as we secured a long-awaited trip to the new Wembley. 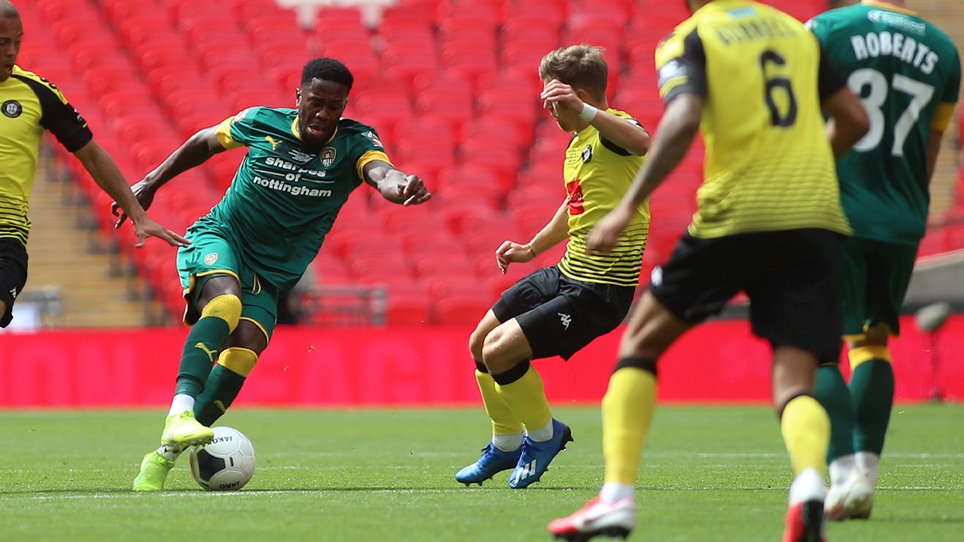 
We suffered a 3-1 defeat to Harrogate Town in the Vanarama National League play-off final. 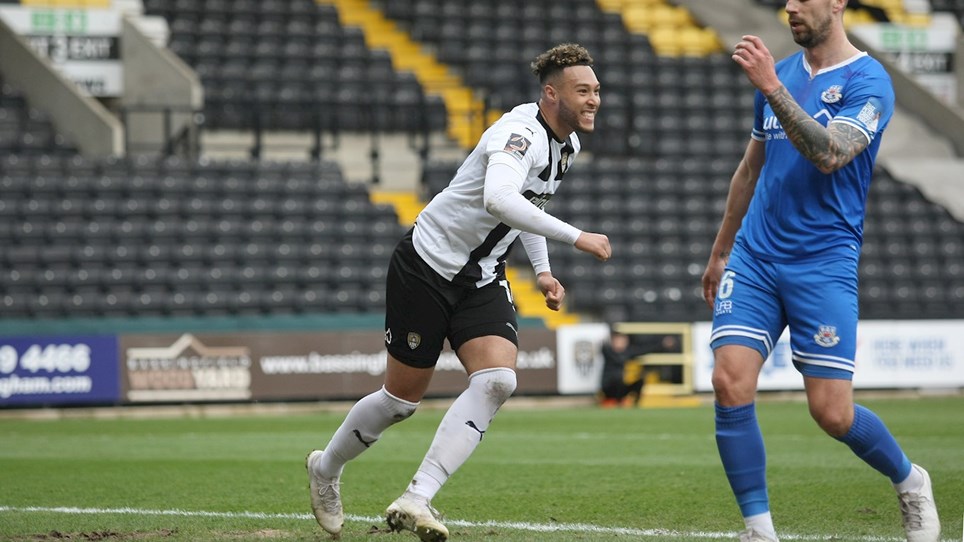 
We ran out comprehensive winners against Eastleigh to record a fourth consecutive Vanarama National League victory and a fifth in all competitions. 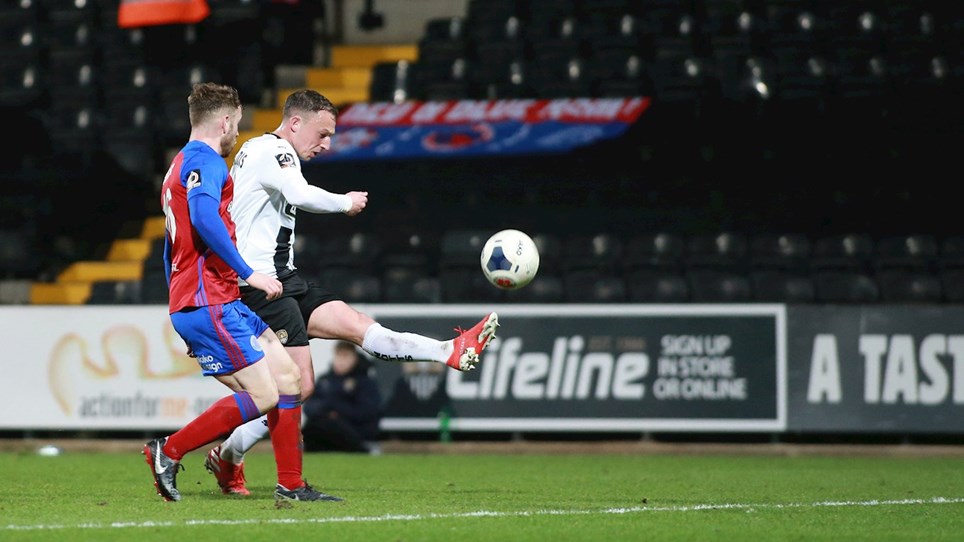 
Kristian Dennis netted a brace as we came from behind to record a third straight league win by beating Aldershot at Meadow Lane on Tuesday night. 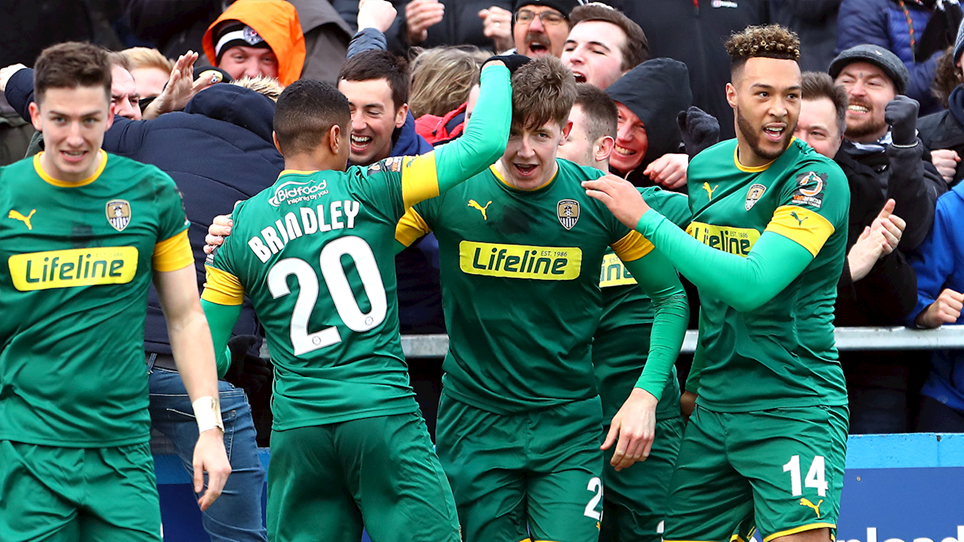 
Tom Crawford and Cal Roberts bagged their first league goals for us as we recorded a magnificent 2-0 win over league leaders Barrow.