Notts County have revealed their full list of monthly shirt sponsors for the 2018-19 campaign.

Following the innovative initiative’s incredibly successful launch last season, the Magpies will once again be sporting a new logo on the front of their home and away shirts every month.

And commercial director Amanda Fletcher is delighted to see a number of organisations return for a second season and many new companies, including a charity, seize the unique opportunity for the first time.

“We have worked incredibly hard over the summer to secure all nine sponsors ahead of kick-off against Colchester United on 4 August,” she said.

“With five new sponsors on board and four continuing their partnership with us, we have achieved a fantastic balance between new and retained business.

“We are especially proud to welcome the charity Action for M.E, whose sponsorship has been donated by Martyn Kelk.

“Martyn has been a key sponsor of the club for a number of years and this season wanted to continue his support in a different way. We applaud his generosity.

“You can read more about the story behind Action for M.E’s sponsorship ahead of their sponsorship in September.

“Having already announced Sports Gateway and Bidfood as our 2018-19 back-of-shirt sponsors, we head into the new season with a tremendously strong and exciting commercial framework.”

Utilita’s logo will already be familiar to Notts fans due to their sponsorship of the club’s shirts during pre-season.

And the energy supply company, who also became an official club partner this summer and will sponsor the back of the Magpies’ shorts throughout 2018-19, are set to continue their front-of-shirt presence during August.

The UK charity offer services and support to improve the lives of those with myalgic encephalomyelitis, a chronic neurological illness that affects 250,000 men, women and children in the UK – more people than MS and Parkinson’s Disease combined.

The Clifton-born musician has enjoyed a busy year of touring following the release of his latest album Hearts That Strain and is now back for a second season on the front of his beloved Magpies’ shirts.

Offering complete electrical solutions to commercial and industrial industries throughout the UK and Europe, Intalek have an unrivalled reputation for both quality and customer care and are excited to be teaming up with the world’s oldest Football League club.

Located off the A52 near the Queen’s Medical Centre, Showcase Cinema De Lux recently underwent a state-of-the-art refurbishment ahead of its 30th anniversary. With a host of winter blockbusters set for the big screen over Christmas, it’s no surprise that they’ll be back for another December on Notts’ shirts.

The world’s first football stock market, Football Index provides the platform for fans to trade players for real money. Driven by Opta data performance rankings, the revolutionary concept is enjoying a huge surge in popularity as the new season approaches.

With a wealth of knowledge and experience in air conditioning and ventilation installation, React successfully assist hundreds of companies to achieve comfortable, fresh, controlled environments and are looking forward to aligning themselves with the club for the first time.

The timber merchants, who enjoyed a significant spike in both sales and awareness following their involvement in the initiative last year, have once again picked March for their month in the spotlight and the club are looking forward to teaming up once more with Paul, Lee and the team. 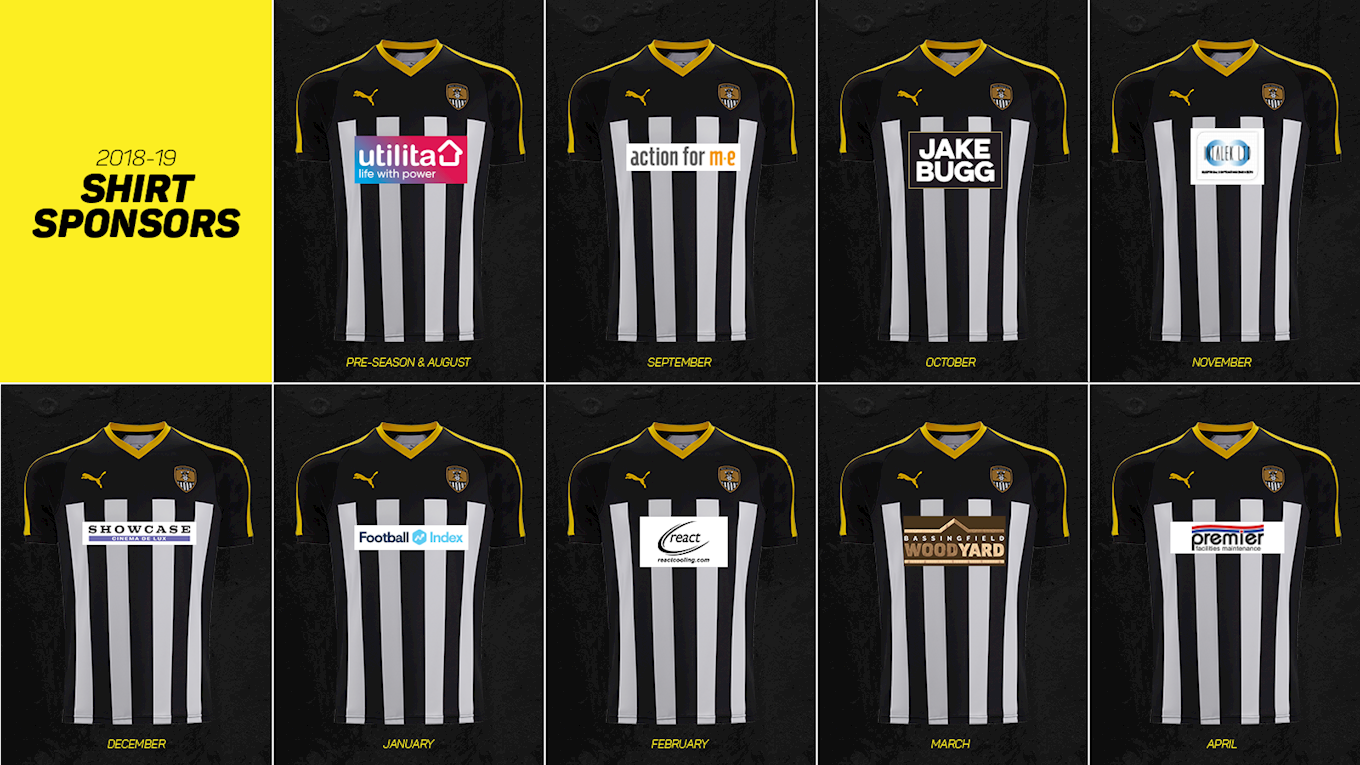 All logos are now available for supporters to have applied to their 2018-19 PUMA home and away shirts free of charge at the club shop.

Ordering a shirt online and would like a logo applied? Simply email magpiestore@nottscountyfc.co.uk with your name, order number and preferred logo.