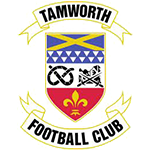 Tamworth held us to a 0-0 draw at the Lamb to set up a replay at Meadow Lane on Tuesday night.

On an afternoon dominated by the men in green, the hosts had their goalkeeper, Jas Singh, to thank for a number of big saves - two from Ruben Rodrigues in the first half and one from Cal Roberts after the break.

We had several other attempts while Anthony Patterson went largely unworked at the other end but there was to be no way through for us.

Ian Burchnall made four changes to the side that beat Yeovil in last weekend’s Vanarama National League fixture at Huish Park with Dion Kelly-Evans and Joel Taylor coming into a back four, Ed Francis returning to midfield and Kairo Mitchell leading the line.

Competition rules permitted Burchnall the rare luxury of seven substitutes and there was a spot on the bench for Jake Kean, with Patterson continuing between the sticks as Sam Slocombe continued his fightback from injury.

Connell Rawlinson also returned to the matchday squad, with Ciaran Brennan partnering skipper Kyle Cameron in the heart of defence.

The match began in familiar fashion with Notts quickly assuming control of possession before carving out half-chances for Aaron Nemane and Ruben Rodrigues.

Patterson then made a decent save to deny powerful winger Tyrell Waite in what transpired to be one of the hosts’ only opportunities to score.

At the other end Jas Singh was a busy man as he pushed away two long-range efforts from Rodrigues, who came into the game having netted four goals in his previous three games.

And it was so nearly five in four with 27 minutes on the clock as he crashed a fantastic free-kick off the underside of the bar, with the ball bouncing away to safety.

Patterson was called upon again shortly afterwards when Taylor misjudged a chest control in the area, prompting the keeper – who extended his loan spell from Sunderland earlier in the week – to make an excellent intervention to deny a Tamworth attacker.

And, after Matt Palmer had fired over and Roberts saw a first-time effort saved, the referee called time on the first half.

We reemerged unchanged for the second half and soon set about altering the scoreline in their favour, with Mitchell, Palmer and Nemane trying their luck without success from outside the area.

Nemane was having a very lively afternoon and, shortly before the hour, he displayed an incredible burst of pace to get into the area and cross the ball into the middle. It was just too high for Mitchell, however, and another opportunity passed us by.

But the biggest chance of the game was still to come as we produced a superb string of passes to release Roberts into the area. With plenty of the goal to aim at, however, he couldn’t beat Singh who produced an excellent save to push the ball wide.

Burchnall made his first change shortly afterwards, sending Kyle Wootton on for Mitchell up front, and he was soon forced into a second when Roberts pulled up with a hamstring problem with 10 minutes left. Elisha Sam replaced him.

The clock was ticking but we pushed on, with Rodrigues scooping a scrambled effort over following Palmer’s corner before having a huge penalty shout turned down when he appeared to be brought down in the box. The referee said it was just outside and the Portuguese could only find the wall with his free-kick before being booked for an angry reaction to a foul on Sam moments later.

Sam could have played the role of hero at the death as, in injury time, we broke from a corner with Nemane threading the Belgian into Tamworth’s half. Sam carried the ball into the area but was unable to find a decisive pass or shot before a covering defender made a massive challenge to earn his side a replay at Meadow Lane on Tuesday night.