We make the trip to Woking this evening as we look to return to winning ways in the Vanarama National League.

Defeat to Chesterfield at the weekend ended our six-game unbeaten run in all competitions, but we’re handed a swift opportunity to bounce back.

That’s something we’ve done well throughout the campaign – registering away wins against Harrogate and Boreham Wood on Tuesday evenings after losing three days previously on both occasions.

In fact, we’re unbeaten in midweek matches, and will hope to climb back into the play-off spots by 10pm tonight.

If we do, it may well be at Woking’s expense. The Cards are sixth but are on a 12-game winless run in all competitions.

They came out of the blocks flying, earning victories in seven of their eight matches in August, but they’ve not won since.

Woking come into this one on the back of a 1-1 draw against Eastleigh and both sides will be eager to take three points tonight.

“It’s about how we bounce back, and we’ve done that well throughout the season.

“It’s another test for us to do it again and pick up some points to get back in the play-offs.

“Woking show a lot of energy and have individual qualities one-on-one so they’ll cause lots of problems if we get stretched.

“They’ve probably surprised a lot of teams but you can see why they’ve won games, so we’ll have to be on our guard and do a lot of things right.” 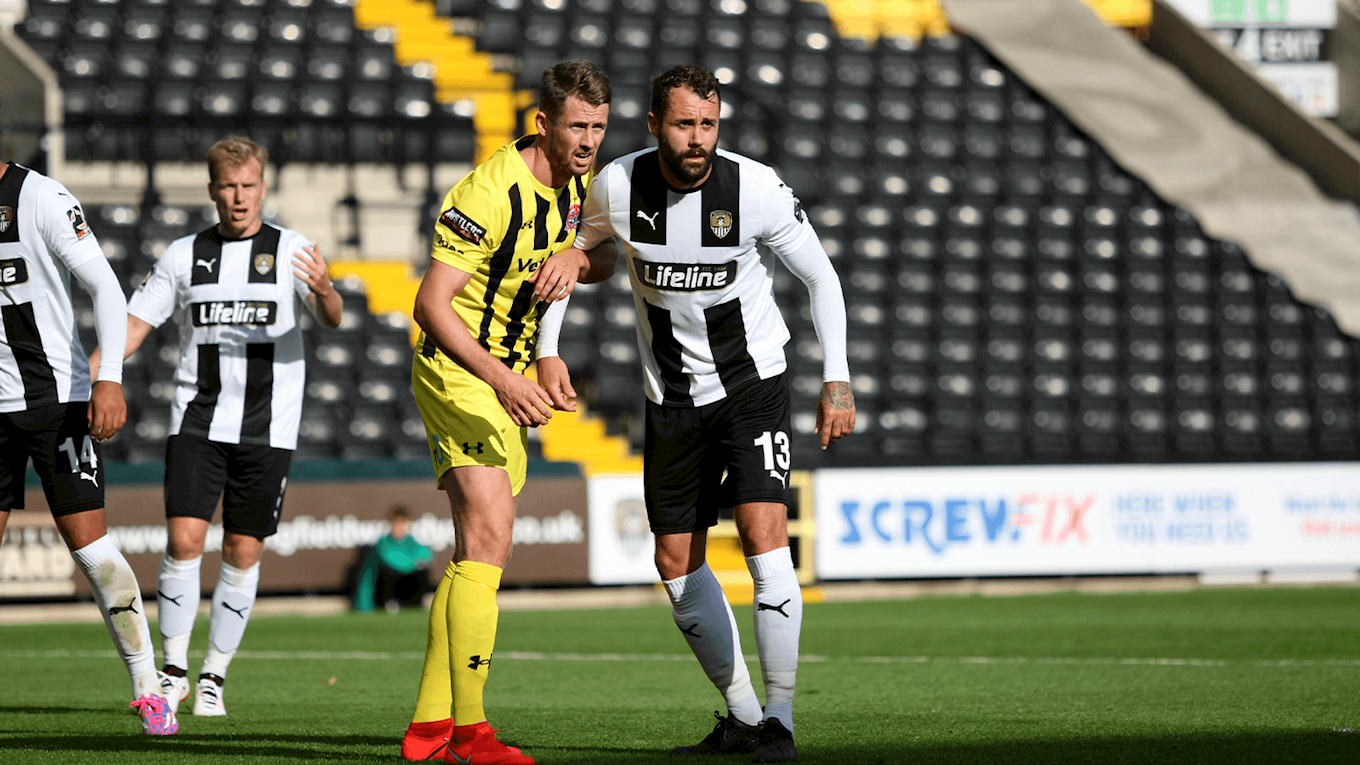 Connell Rawlinson missed out at the weekend with a slight calf injury but Neal Ardley told the media on Monday afternoon that the centre half had returned to training and is in contention.

Nathan Tyson has been suffering with illness, so it remains to be seen whether he will make the trip to Surrey.

Woking boss Alan Dowson gave loan signing Glen Rea a debut at the weekend as he made five changes to his side.

Moussa Diarra, Nathan Collier and Jamar Loza came back in, as did top scorer Jake Hyde.

All will hope to be included again, with Tyreke Johnson the only injured player.

We’ve met Woking just once before, back in 2004 in the first round of the FA Cup.

There were 4,700 in attendance at Meadow Lane to watch Julien Baudet and Gavin Gordon seal our 2-0 victory. 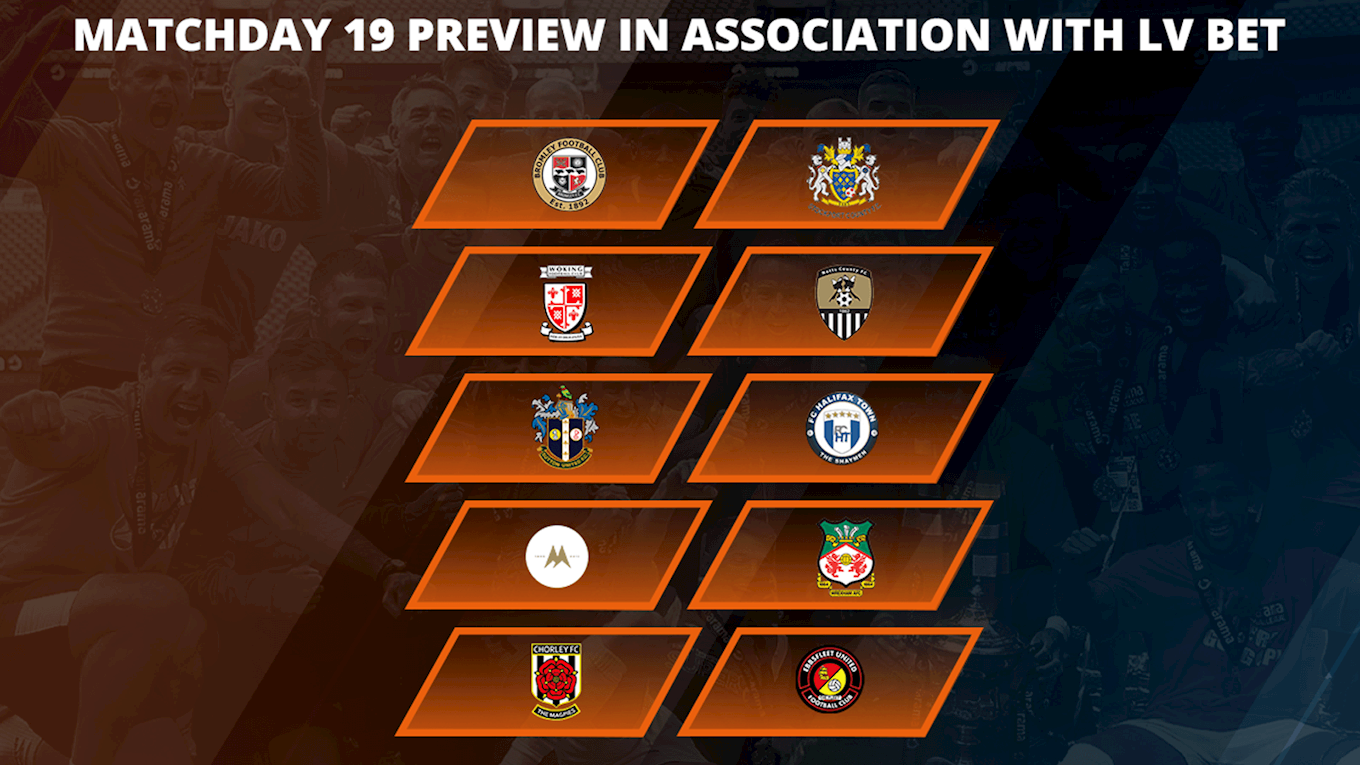 LV BET, the National League’s official betting partner, highlight the pick of the fixtures this evening...

Top of the table Bromley ended a run of three defeats in four with an emphatic 5-0 win against FC Halifax Town on Saturday.

The leaders are now the second highest scorers in the division with 32 – an average of 1.7 goals per game.

Conversely, Stockport are struggling to find the target and have only bagged 19, but they were winners at Dover at the weekend – their first away victory in five attempts.

Sutton slipped into the relegation places for the first time after their weekend defeat to Ebbsfleet United and have won just one in ten.

Third-placed FC Halifax Town haven’t scored in their past three matches and have let in seven in their last two.

Torquay are the division’s top scorers with 33 but just two sides have conceded more than the 28 they have.

Wrexham have won only once in their last eight National League outings and still haven’t recorded a victory away from the Racecourse this season.

The Red Dragons were 4-0 winners in January 2018 when the sides last met.

Bottom club Chorley have only lost once in five but they haven’t won since beating Stockport nine games ago.

They have only conceded two goals in nearly 500 minutes of football but have scored just once themselves in that five-game period.

On the other hand, Ebbsfleet have only failed to hit the target in three of their last 17 and ended a run of four straight National League defeats with victory at Sutton on Saturday.

We bounced back to winning ways with a superb 4-0 victory at Woking which lifted us back into the National League play-off places.

Two goals each from Enzio Boldewijn and Wes Thomas moved us up to seventh position ahead of Saturday's home game with Hartlepool United.
Manager Neal Ardley made three changes to the side which lost at Chesterfield on Saturday, a defeat which ended a six-game unbeaten run.
Thomas, Regan Booty and Connell Rawlinson all started, with Kristian Dennis, Zoumana Bakayogo and Sean Shields dropping to the bench.
We began brightly and almost had a dream start when Damien McCrory's left-wing cross was headed over by Kyle Wootton in just the second minute.
Jake Hyde looked to be through on Sam Slocombe's goal before a late offside flag was raised, but it was us who took the lead after six minutes with another goal-of-the-season contender from Boldewijn. He picked up the ball ten yards inside Woking's half, turned his defender and raced towards goal before unleashing an unstoppable right-foot shot into the top right corner of Craig Ross' net.
Ben Turner headed over Booty's free kick and Wootton looked certain to nod home from a yard out after Boldewijn's cross, but Ross got his fingertips to the ball just before it reached the striker, who could only head over.
Woking threatened through a series of free kicks but Slocombe and his defence held firm, and we doubled our lead on 19 minutes. Wootton burst through and Ross could only touch his shot to Thomas, who bundled the ball over the line.
A last-ditch tackle by Jack Cook denied Booty, and Wootton could only shoot into the side netting as we finished a fine half in control.
Woking must have had a tough half-time talk as they burst forward on the restart, Dave Tarpey heading wide and Hyde's backheel just faiing to send Glen Rea clear.
But we came back and on 60 minutes went 3-0 up. After McCrory's low strike was cleared by Ross' foot, we won a free kick which Booty stood up to the back post. It was cleared to Richard Brindley, who fired it back into the area and Thomas turned the ball home.
Woking refused to give up and Notts survived a barrage of free kicks and corners, with referee Gary Parsons unmoved by several penalty appeals.
McCrory was booked for a foul and theresultant free kick from the right was cleared off the line, but from this we went four up in the 73rd minute. The ball fell to Boldewijn, who raced clear on the left and coolly slotted home his second goal of the game.
Slocombe fell on the ball after a goalmouth scramble following a Woking corner before Shields replaced Thomas with ten minutes to go.
Late on, Loza had the ball in the net for Woking but his effort was ruled out for offside.
And we saw the game out in relative comfort to move seventh in the table with the division's best goal difference.

Ticket details have been confirmed for our trip to Woking on Tuesday 29 October (kick-off 7.45pm).

We have been allocated 234 seats behind the goal in the LGS Stand, as well as 800 uncovered terrace spaces along the side of the pitch.

Advance tickets are available directly from Woking by clicking here or supporters can pay at the Laithwaite Community Stadium's turnstiles on matchday with no price increase.

*A valid student ID will be required

Woking are providing four tickets for our disabled supporters and their carers, which are priced £13.

Official away travel will depart from near the club shop on Meadow Lane at 3pm.