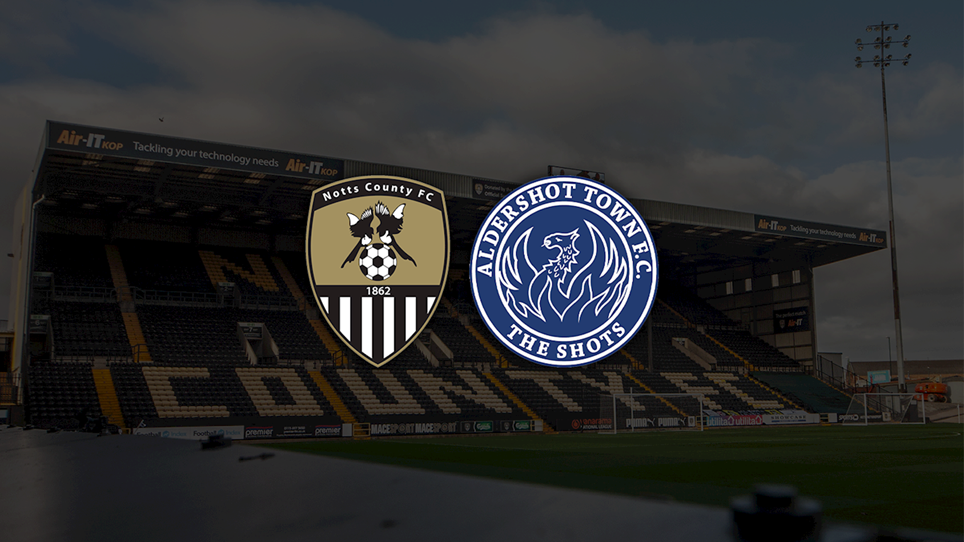 Kristian Dennis netted a brace as we came from behind to record a third straight league win by beating Aldershot at Meadow Lane on Tuesday night.

We were slow out of the blocks during a flat opening 25 minutes and fell behind when Craig Tanner nodded home at the back post.

Cal Roberts brought us level shortly after the half-hour mark with his second in as many games and we turned things around after the interval.

Dennis took his tally for the campaign to 14 with a pair of outstanding goals after the break, which fired us to a season-high third in the Vanarama National League.

As our hectic run of fixtures continued, Neal Ardley kept his promise of rotating his squad and made seven changes from the side that won at Barrow.

In came Roberts, Dennis, Kyle Wootton, Enzio Boldewijn, Mitch Rose, Dion Kelly-Evans and Adam Long as we reverted to a 4-4-2.

Connell Rawlinson, Wes Thomas, Scott Wilson, Tom Crawford and Michael Doyle all dropped to the bench, while Joel Bagan and Richard Brindley were absent from the squad altogether.

Damien McCrory switched to his more familiar left-back role and went down holding his face early in the game but was fine to continue.

That was the only incident of note during an opening 15 minutes that saw both sides struggle to find any fluency to their play.

The first shot of the game led to the deadlock being broken on 17, when we spurned several chances to clear our lines and Aldershot stayed patient in their attack. The ball was then worked to Ethan Chislett, whose cross to the back post picked out Tanner to nod the visitors into the lead.

O'Brien had to make an important intervention to stop the Shots doubling their advantage five minutes later after Chislett's winding run took him into a good crossing position and his looped ball caused some panic, but the Scot was well positioned to clear.

It was proving a painful watch with both sides lacking quality in possession but a lucky break freed Boldewijn just after the midpoint of the half. He didn't get his head up to see he was on his own in attack, though, and his delivery along the six-yard box was to no one.

Moments later the Dutchman did pick out a team-mate, when his pass sent Wootton in behind the Aldershot defence with just keeper Mitch Walker to beat. The striker tried to lift the ball over him and into the net but could only get the first part right as the effort went past the post.

Boldewijn was leading the charge as we looked to restore parity and when he ghosted in off the left flank before finding Roberts on the opposite side of the area, the Geordie would have expected to do better than have a near-post shot turned behind.

But he did do more on 35. Seconds after Jacob Berkeley-Agyepong's snap-shot was held by Joe McDonnell, possession was worked to the winger just outside the Aldershot box. His close control meant defenders were reluctant to engage with him and he found space for a shot from the edge, duly arrowing it into the bottom corner he'd attempted to find with his previous effort.

Yannis Drais fired well over from range as the visitors looked to regain their advantage but it was us who'd have gone into the break ahead but for a fine piece of defending.

Just as two additional minutes were indicated, Roberts' cross looked to pick out Wootton before breaking kindly for Dennis to strike from seven yards, only to find a sprawling Kodi Lyons-Foster blocking the shot's route to goal.

There were no changes at the break but we should have fallen behind within a minute of the restart, when a swift Aldershot break released George Fowler down the right. He rolled the ball inside to Chislett, who was left kicking himself after firing wide from six yards out.

He had another go with an ambitious volley shortly afterwards and Drais sent another effort from distance well off target as the visitors came out aggressively.

We looked to have weathered the storm but were millimetres away from falling behind again when Tanner's fierce drive struck the crossbar on 58. McDonnell might have got fingers on it.

And we were denied by the frame within seconds, when Wootton's bustling run took him into space on the left side of the area to unlesh a rasping effort which cannoned down off the bar and onto the line. With no goal-line technology, we'll never know how close it was.

But that near miss was forgotten in an instant as Dennis succeeded where his strike partner had failed in the first half with an inch-perfect lob over Walker to put us into the lead with an hour played.

The forwards combined as we looked to press home our advantage but Wootton could only turn a cross over in the 63rd minute, and Roberts first-time effort was well saved shortly after.

But we were not to be kept waiting much longer and went two ahead with 67 on the clock. Kelly-Evans' excellent cross from the right picked out Dennis, who expertly headed into the top corner from the penalty spot.

Jean-Yves Koue Niate turned the striker's powerful drive over his own crossbar on 70 minutes and our number nine nodded wide from the resultant corner as he chased a hat-trick.

Wootton was keen to get in on the act and could well have done when he met Roberts' lovely cross from the left but could only head over.

That was the Geordie's last involvement before he made way for Doyle on 76 minutes. The Irishman took the armband from Rose, who was making his 200th career appearance and in turn made way for Crawford with 84 played.

Dennis' quickfire goals had taken the sting out of Aldershot and we looked comfortable for the remaning minutes, with our second substitute going closest to adding his name to the scorers following Boldewijn's powerful run. Walker foiled Crawford, though.

Four minutes were added on, during which we dealt well with a free-kick from a dangerous position before time was called on another impressive victory.

Tickets are still on sale for tonight's fixture against Aldershot Town (kick-off 7.45pm).

Supporters looking to purchase hospitality for this fixture are advised to email commercial@nottscountyfc.co.uk.