We’ll be looking to make it three victories on the spin after overcoming FC Halifax Town in a thriller on Saturday afternoon.

That brought an end to our five-match winless run in the Vanarama National League, and now we’ll look for a belated Christmas present by picking up our first three points at home since 12 October.

Maidenhead are five points, and places, behind us in the table and come into this one on the back of a 4-1 defeat at home to Barnet.

They’ve bounced back with a win after each of their previous two losses and will hope to do the same again as they visit Meadow Lane for the first time in their history. They’ve got one of the best away records in the division, too.

“Anyone can beat anyone in this league if they’re at it. Nothing’s easy at this level.

“We have to take the second half performance from Halifax, carry that into the game and get our home crowd behind us.

“It’s a tough period but we can’t look too far ahead. The focus is on Boxing Day and getting everyone fit, and we’ll worry about the following games afterwards.” 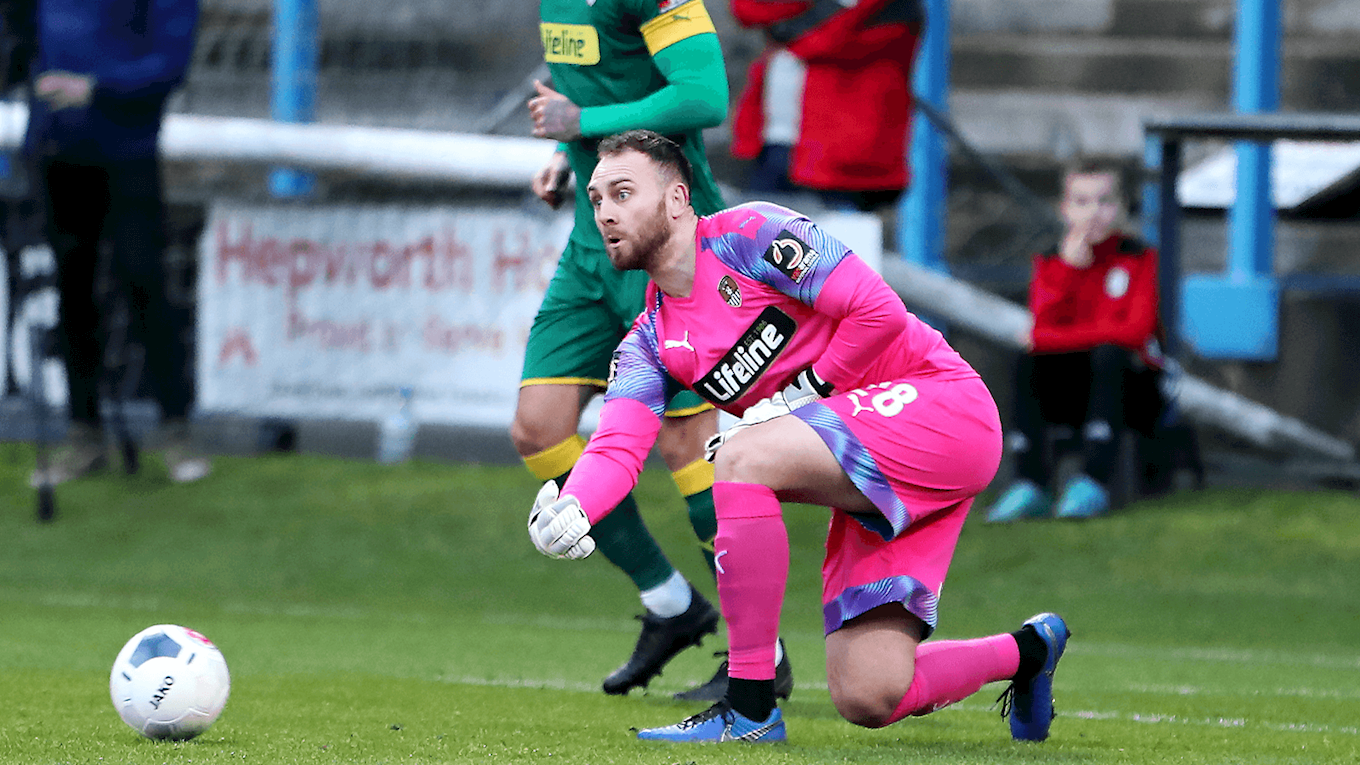 Richard Brindley, Sean Shields and Mitch Rose were all forced off with knocks during the win against Halifax, so it remains to be seen whether they will recover in time.

Ross Fitzsimons deputised for Sam Slocombe between the sticks as the number one was left out to avoid aggravating the injury picked up at Chesterfield on 14 December, and he will hope to have done enough to keep his place.

Maidenhead striker Josh Kelly had to come off injured during the defeat to Barnet, and boss Alan Devonshire said their attacking threat departed with him.

They might look to Daniel Whitehall to provide the spark. The summer signing is their top scorer but has started just one of their last four in the league.

This will be the first competitive encounter between the two sides, however we did meet in a pre-season friendly in 2011.

We were beaten 3-2 at York Road in our final game before the campaign kicked off, going on to miss out on the League One play-offs by virtue of goal difference. 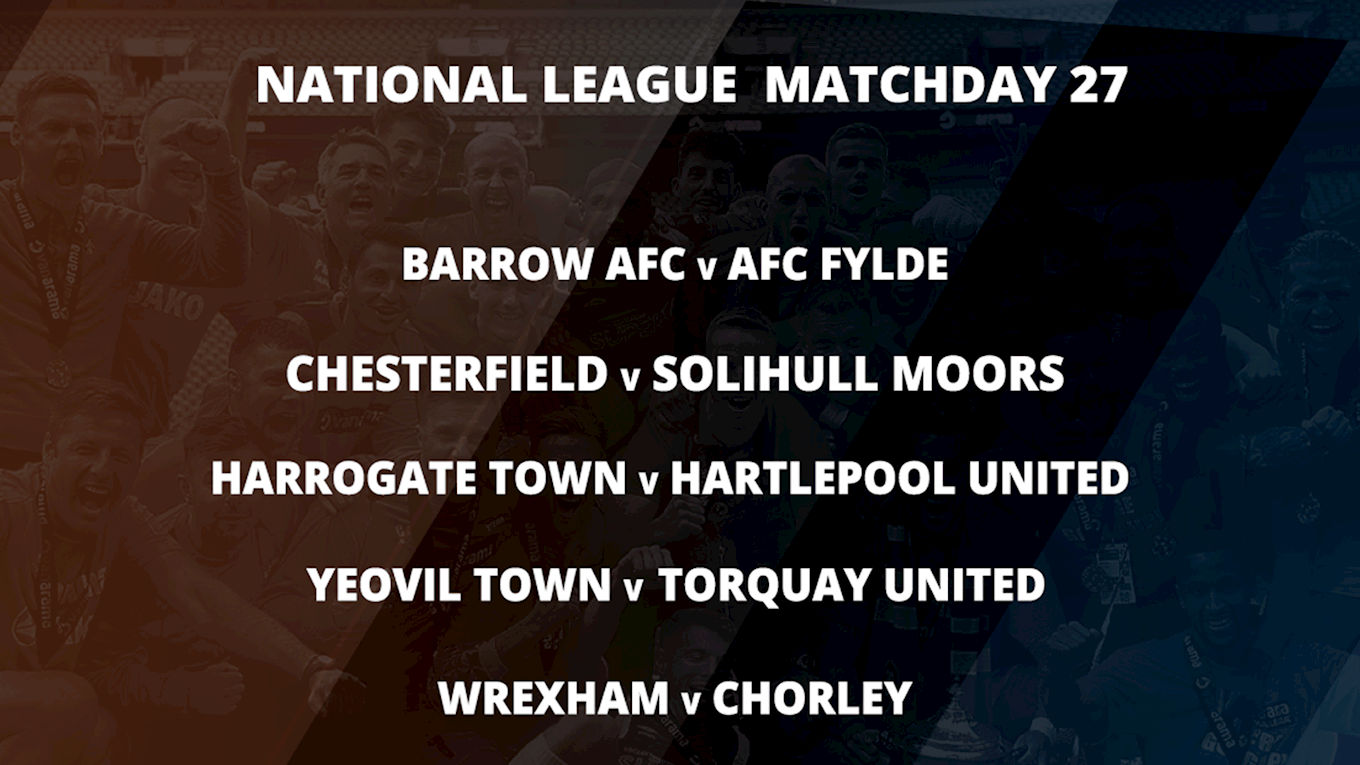 LV BET, the National League’s official betting partner, take a look at the pick of the Boxing Day fixtures…

Barrow hold a two-point lead at the top of the National League and boast a game in hand on all their title rivals.

Fylde remain in trouble and haven’t won in three, losing six of their last nine on the road.

Ian Evatt’s leaders have won six from seven at home and are the division’s top scorers with 46.

Only Wrexham have let in more on their travels that Fylde’s 24.

Chesterfield’s win at Torquay on Saturday was their first win in eight National League matches.

Title-casing Moors have only won three times on their travels - less than any other championship contender.

Chesterfield haven’t won at the Proact since beating us on 26 October.

Moors have the best defensive record in the division and top scorer Paul McCallum has nine to his name.

Harrogate have taken just four points from a possible 12 following defeat at Boreham Wood on Saturday.

Pools have only suffered one defeat in five National League matches, a period in which they also earned a place in the FA Cup’s third round.

Harrogate’s have been in fine form at home, taking 19 points from a possible 21.

The sold-out away end will be looking for only a third victory on the road in nine. Pools have scored 13 goals in their last five away trips, though.

Second-placed Yeovil are undefeated in six and have scored an average of two goals a game in that run.

Torquay have lost their last six games – their worst run for more than three years.

Out-of-sorts Torquay have conceded 10 in their last three matches but only three clubs have scored more than they have.

Wrexham have taken 20 of their 26 points from home matches this season.

Chorley have lost only one of their last six but were denied three points at the death against Dover on Saturday.

Dean Keates’ Dragons are looking for back-to-back home wins for the first time this season. They have lost just two of their last nine at the Racecourse.

Chorley have drawn seven away from home – more than anyone else – but they have only scored 13 times on their travels.

An excellent first-half performance set the tone as we comprehensively beat Maidenhead United on Boxing Day.

Kyle Wootton headed home the opener after a bright start, before Sam Osborne marked his first league start since October by wonderfully finishing an exceptional team move to make it two inside half an hour.

Kristian Dennis also marked his return to the XI in style when he netted our third just before the break and we never looked like relinquishing the advantage as we secured our first home win since October.

The side showed four changes from the weekend success at FC Halifax Town, with Dion Kelly-Evans also handed a start, while Sam Slocombe shook off the injury that kept him out at the Shay to regain his place between the sticks.

That meant Ross Fitzsimons, Richard Brindley and Wes Thomas had to settle for places on the bench, with Sean Shields absent altogether from the squad after reporting a tight hamstring earlier in the week.

We started brightly, with Enzio Boldewijn, who lined up on the left wing, driving down the channel before winning a corner in the second minute. Connell Rawlinson flicked the set piece towards goal, but a host of Maidenhead players got in the way and, despite shouts for handball, the visitors cleared.

Moments later, Dennis had his first sniff of a chance after latching onto a ball over the top from Damien McCrory. He miscued his volleyed effort, though.

Maidenhead showed their threat on six minutes, when Josh Kelly got in behind the defence. Slocombe came out to meet him and forced him to turn backwards before retreating to his goalline but Remy Clerima picked up possession and was brought down just outside the area by Mitch Rose, who went into the book. James Comley put the free-kick wide from a great position and the danger passed.

Rose sent a deflected long-range effort narrowly wide before Kelly-Evans made a fine defensive header to disrupt a dangerous attack from Alan Devonshire's side, and McCrory fired off target from the edge of the box as an entertaining opening quarter-of-an-hour drew to a close.

We were in command of proceedings and took the lead our start deserved on 20 minutes. Once again, Wootton was the man to make the breakthrough, meeting Boldewijn's corner with a towering header to register his third of the week and 12th of the season.

Alex Lacey thought he might mark his home debut by doubling the advantage shortly afterwards, but Maidenhead smuggled the ball clear after a corner had broke kindly for the centre half.

We did go two to the good inside the opening half-hour, though, with an exceptional goal. The visitors weren't giving us any time in possession but we beat the press thanks to McCrory's fine ball inside to Michael Doyle, who in turn released Kelly-Evans on the right flank. The full back's perfectly weighted pass set Osborne in behind and the winger checked inside before striking across goal and giving Chris Dunn no chance of keeping him out.

Shortly after Jake Cassidy, our former striker, called Slocombe into action, the youngster could have doubled his tally, but his effort from the edge of the box was deflected wide, with the keeper a bystander.

And, just before two minutes of added time were indicated, our excellent first-half display was given extra gloss. Boldewijn registered his second assist of the afternoon by crossing low after a fine run down the right wing, and Dennis was there with the first-time finish to send Meadow Lane into raptures and take his tally for the season into double figures.

Devonshire's response to a nightmare first half was to send top scorer Daniel Whitehall on for defender Aron Davies and Josh Smile on in place of Ryheem Sheckleford. Neal Ardley made no changes on our part.

Dennis went close to his second of the afternoon on 50 minutes, but his deflected effort from 20 yards went narrowly wide of the mark, before Cassidy sent a shot just over Slocombe's crossbar after doing well to hold off a couple of defenders.

Whitehall gave an indicator of why he leads United's goal-scoring charts on 59 minutes, when he bent the ball just wide of the target with a first-time strike.

We were patiently probing for a fourth, and it looked like it might have came when Boldewijn's fine work on the right flank led to him sending a low ball across the goalmouth, but Maidenhead managed to clear.

Wootton and Rose were withdrawn with 19 to play, with Thomas and Tom Crawford sent on to the field.

Cassidy looked in the mood to mark his return to the Lane with a goal and when Rawlinson's block on his shot sent the ball looping towards Slocombe's net, he might have thought he'd have it. However, it landed on the roof, much to the relief of the bulk of the 5,129 in attendance.

Dennis was left ruing a fine defensive header which kept him from doubling his tally on 77 minutes, when his curling shot looked to have beaten Dunn but was diverted clear.

The 100 who made the trip from Berkshire were desperate for something to cheer, but Seth Twumasi could only shoot wide after receiving the ball in space on 84 minutes.

Three minutes were added on for stoppages, during which Whitehall shot over from 20 yards, but our second league win on the spin was never in doubt.

Tickets are still on sale for our Boxing Day match against Maidenhead United (kick-off 3pm).

This will be the first match included in our 2019-20 half-season ticket package, offering you the best-value way of watching the final 10 matches of the campaign! Click here to find out more.

We're offering you a choice of two festive hospitality packages for this match!