We kick the Christmas period off with a trip to FC Halifax Town on Saturday afternoon!

Our first of five games in 14 days takes place at The Shay, where we’ll be looking to do the double over Pete Wild’s side after winning at Meadow Lane in September.

Our Buildbase FA Trophy success at Chesterfield last week ended a five-match run without victory in all competitions and we’ll look to build on that.

Town’s form over their last six in the league has been identical to ours, with one win and three draws in that period.

They’re in danger of dropping out of the top seven if they lose, and we’ll move within two points of the Shaymen if we’re victorious.

We’ll both be keen to get our festive schedule off to a flyer, but both sides will come together to observe a minute’s silence ahead of kick-off to honour Jim Smith, Town’s former player.

“There will be a morale boost if we win on Saturday and get back in and around where we want to be.

“We’ve not had that feeling for four or five games now and we’re champing at the bit because we lost that ground and don’t want this to continue.

“This is a period we have to take points from otherwise we’ll find ourselves with a mountain to climb, so we need everyone to dig in to get us in touch – that’s the aim.

“We know we have to focus on us. If we don’t play great, we’ll lose the game but if we put in the kind of performance we can, we’re capable of beating anybody.” 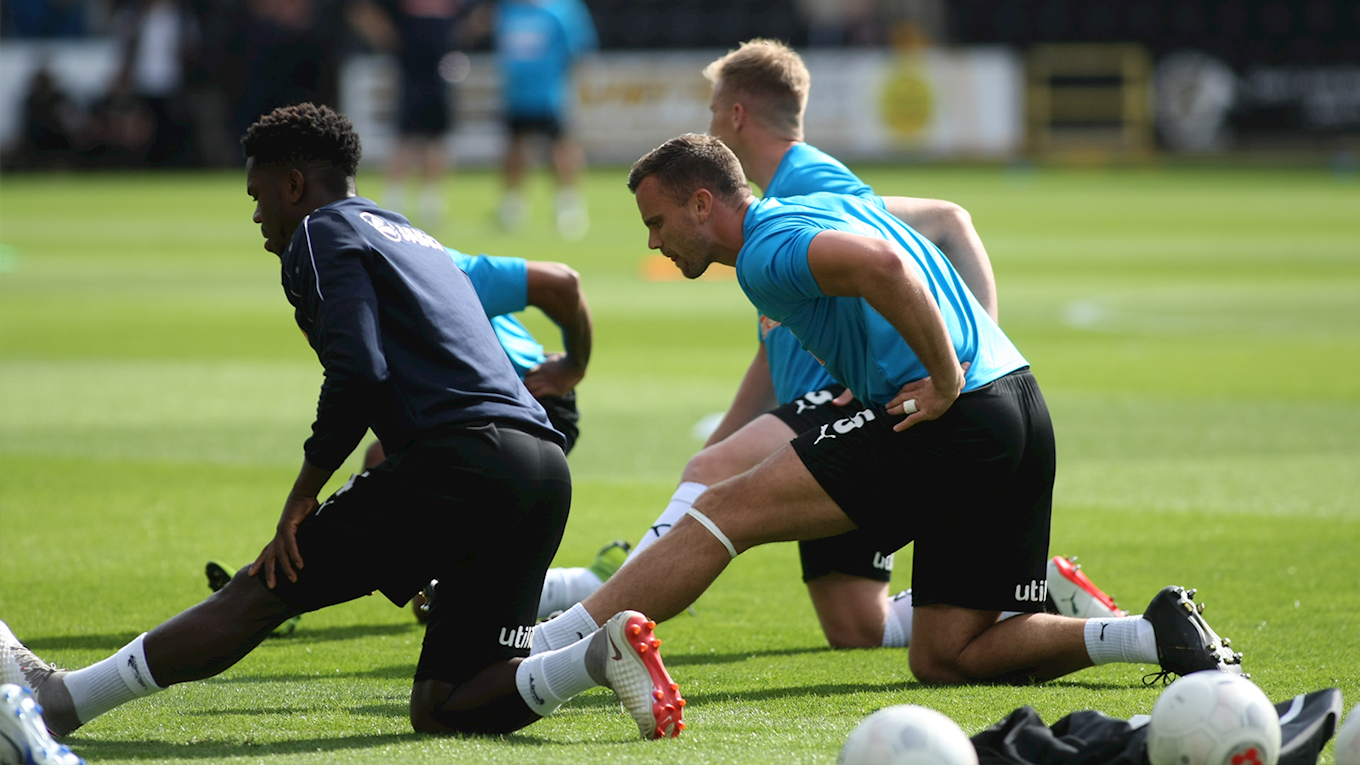 Neal Ardley reported a host of injury problems when he met the media on Thursday, with Jim O’Brien and Ben Turner facing lengthy spells out.

Regan Booty and Sam Slocombe were also considered touch and go ahead of the weekend, but Pierce Bird has been recalled from his loan at Boston to reinforce the defence.

Town’s top scorer, Liam McAlinden, was an unused substitute as they beat Wrexham 4-0 in the FA Trophy last week, so he’ll have his eyes set on a return.

The Shaymen signed Shawn McCoulsky on loan from Forest Green earlier this month, and he netted the winner for Bromley during our 2-1 loss to the Ravens in September. He’ll hope to feature on Saturday.

Kyle Wootton netted his first goal at Meadow Lane as we took the points in this season’s reverse fixture.

Michael Doyle was sent off moments after half-time but we rallied following the dismissal and the big striker grabbed the winner just before the hour mark. 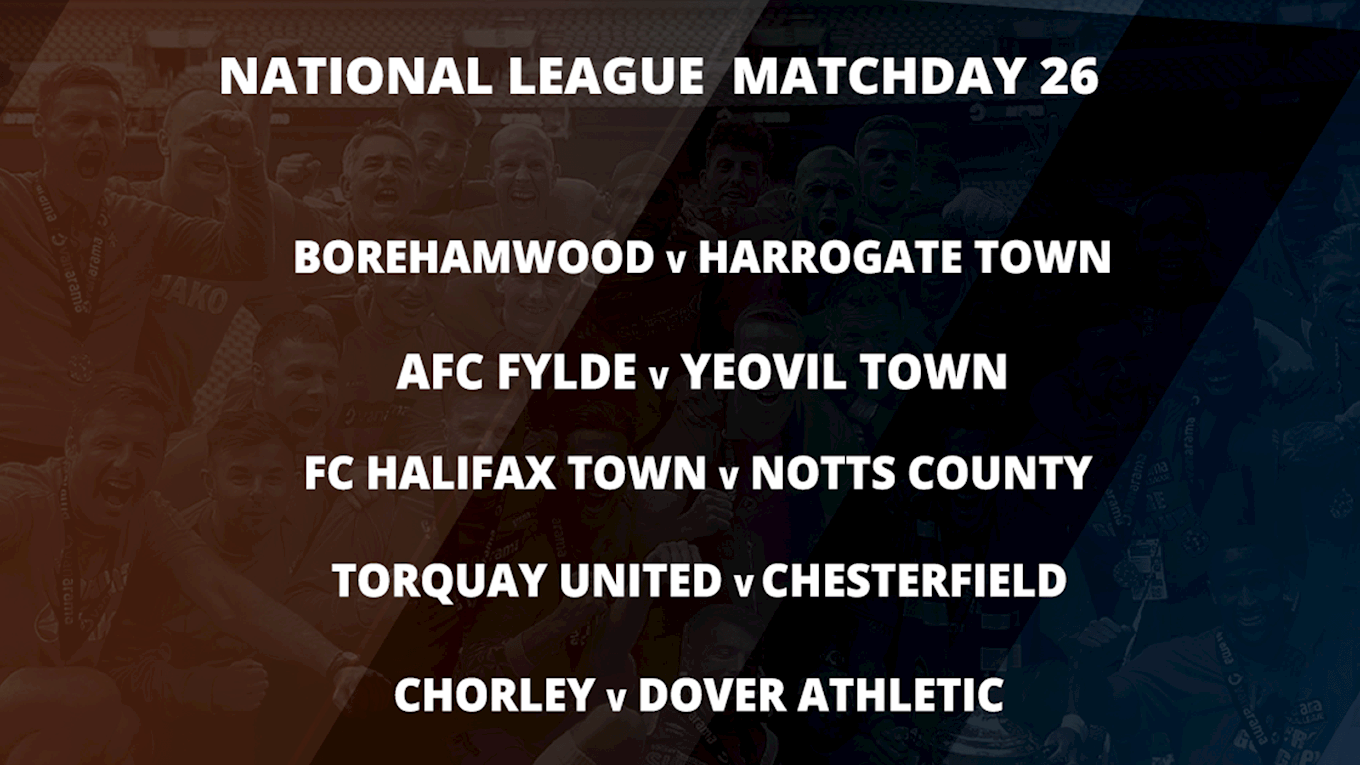 Elsewhere in the division

LV BET, the Vanarama National League’s official betting partner, take a look at the pick of the fixtures…

Boreham Wood are undefeated in five, which is their best run of the season, while Harrogate have won just one in five away from home, but still hold a play-off place.

Wood’s Kabongo Tshimanga and Tyrone Marsh have scored 21 league goals between them this season and will fancy their chances of adding to that against a Harrogate side that has conceded more than anyone else in the top seven, but they have netted 38.

AFC Fylde have kept five clean sheets in their last six matches in all competitions and have only lost three home games this campaign, but remain just two points above the dropzone.

Title-chasing Yeovil haven’t lost in five away from Huish Park and recorded wins in their last two, at FC Halifax Town and Chesterfield, and have 16-goal Rhys Murphy, the league’s top scorer, in attack.

Torquay have lost five straight National League matches, which is their worst run for over two years, while Chesterfield remain in the bottom four having been beaten in six of their last seven.

The Gulls have shipped 13 goals in their last five games, including five against Stockport County in their last league match at home.

Chesterfield have been stronger on their travels, losing just four of their 12 games away from the Proact so far.

Chorley’s defeat to Stockport last time out was their first in five, but it saw them return to the foot of the table.

No one has a better record on the road than Dover, who have won seven times away from home already.

The two sides drew 1-1 in the reverse fixture back in September but this is their first ever league meeting at Victory Park. 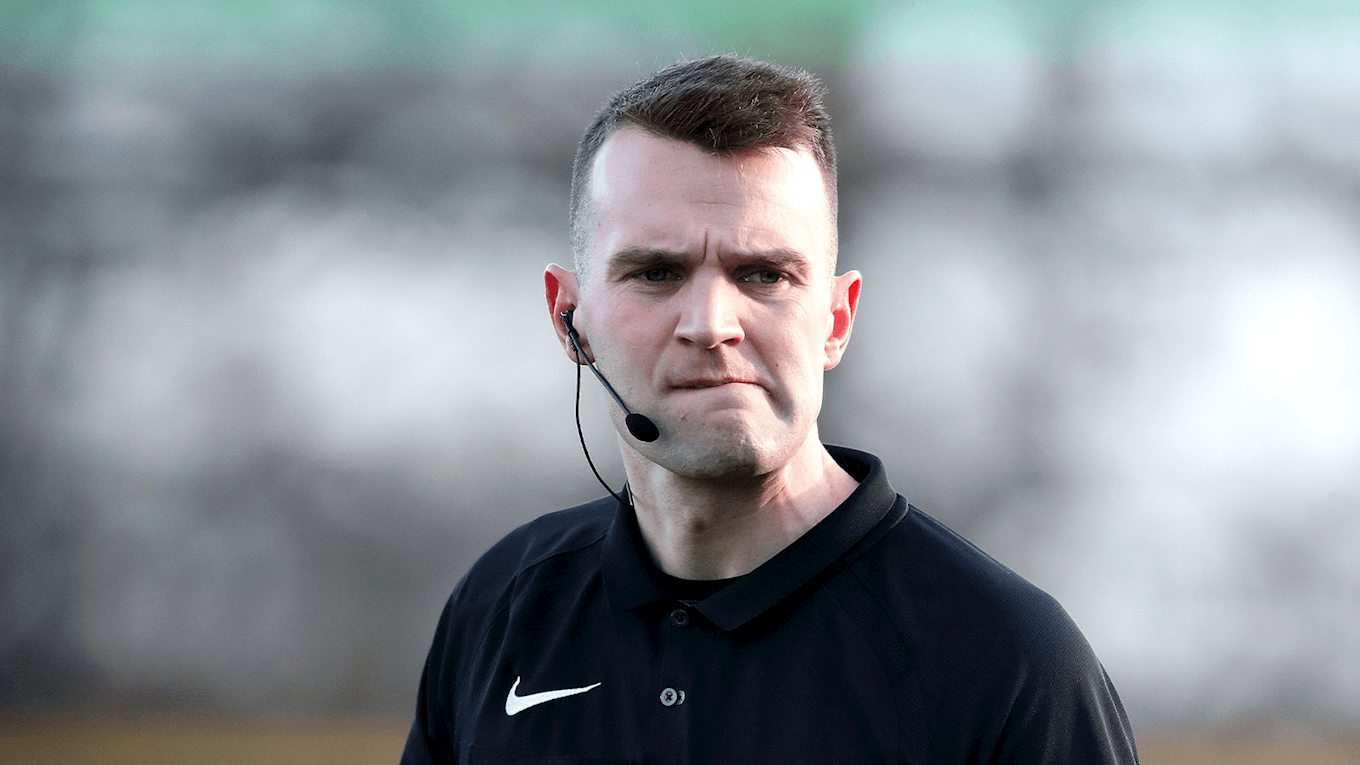 We emerged 4-2 victors from an incredible festive fixture away at Halifax Town.

After a dour first half had ended 1-0 to the hosts courtesy of a hugely deflected Matt Duckworth effort, few of the 2,491 onlookers would have believed what was to come after the break.

Kyle Wootton restored parity shortly after the restart but the Shaymen soon retook the lead thanks to Jamie Allen.

We were in defiant mood, however, and levelled again through Mitch Rose – who hit the bar minutes later.

We piled on the pressure and eventually it told when Enzio Boldewijn won a penalty which Rose duly dispatched.

And, in the dying embers of six added minutes, Wootton produced a superb finish on the break to secure us our first National League victory since late October.

Ross Fitzsimons was handed his first start of the season, deputising for Sam Slocombe who picked up a groin injury in last weekend's Buildbase FA Trophy win at Chesterfield.

The only players to keep their place from that starting 11 were Alex Lacey, his centre-back partner Connell Rawlinson and Sean Shields.

That meant Wootton continued his partnership with Wes Thomas up top, with Michael Doyle lining up alongside Rose in central midfield.

Pierce Bird, recalled from his loan at Boston to cover for a midweek injury to Ben Turner, took his place on a substitutes' bench which also featured Jake Kean, Dion Kelly-Evans, Tom Crawford and Kristian Dennis.

The crowd had to wait until the ninth minute for the game's first shot as Boldewijn's effort was blocked by Town defender Niall Maher.

While we were moving the ball forwards nicely, clear-cut chances were proving hard to come by.

But we did breach the Town defence on 22 minutes when Doyle produced an outstanding cross, picking out Thomas eight yards out. The unmarked forward couldn't head the ball goalwards, however.

Wootton was next to have a go, doing well to shift the ball on to his left foot and digging a curling shot wide.

A couple of our players needed treatment as half-time neared - Rawlinson having his head bandaged and Shields needing some freezing spray on a sore ankle.

Both were fit to continue as Halifax won a free-kick in a dangerous shooting position. Duckworth took responsibility for it, striking the ball well but seeing Fitzsimons hang on to it under his crossbar.

Duckworth wasn't to be denied, however, as seconds before two minutes of added time were indicated he handed his side the lead with a bobbling shot which took a horrible deflection to wrong-foot Fitzsimons.

There were no changes at the break but we soon altered the scoreline in our favour.

Wootton was the man of the moment, moving his season tally into double figures by forcing the ball home from close range after Shields’ free-kick had caused havoc.

And it was so nearly 2-1 to us seconds later when Thomas’ movement towards the near post saw him meet a low cross and turn the ball inches wide with a first-time effort.

It was a missed opportunity we were left to rue as, with their next attack, Halifax restored the lead when excellent wingplay resulted in Allen producing a fine finish from inside the area.

But our frustration was short-lived as, three minutes later, Rose met a defensive header with a crunching volley from the edge of the area which left Town keeper Sam Johnson with no chance.

And Rose nearly turned the game on its head shortly after the restart, clipping the bar with a shot from inside the area after brilliant Boldewijn wingplay.

The Dutchman then had a big chance to score himself when he received the ball in the area before firing it over from a tight angle.

At the other end, Rose bravely blocked Maher’s shot before we created another massive chance to take the lead.

Boldewijn, who was having a very bright second period, delivered a delicious cross into the middle but Thomas could only head the ball over.

It was all us and Wootton was denied a second on 74 minutes when his first-time effort from Shields’ low corner was blocked by a defender.

Our first change of the day followed as Kelly-Evans replaced Richard Brindley, who Neal Ardley confirmed after full-time had been struggling with a tight hamstring.

And moments later we got the break we deserved when brilliant footwork from Thomas led to Boldewijn being scythed down in the area, leaving the referee with no hesitation in pointing to the spot.

Halifax keeper Johnson guessed the right way but Rose’s penalty was too good as the ball found the bottom corner.

Our next change saw Dennis replace Shields and the striker tried his luck with a speculative curling effort which flew wide after Thomas had done well to win us a corner.

There were then a couple of feisty moments as Wootton clashed with Charlie Cooper in a meaty 50-50, sparking a spot of handbags between both sets of players, minutes before Rose reacted angrily to a poor-looking challenge from Duckworth. Both men entered the book inside six minutes’ added time.

In truth, we were looking comfortable but there was a nervy conclusion to the game as Town won a corner at the death.

But we put the icing on the (Christmas) cake when Fitzsimons’ superb kick set us away on the break, allowing Wootton to bag his 11th goal of the season with a wonderfully composed finish.

Ticket details have been confirmed for our trip to FC Halifax Town on Saturday 21 December (kick-off 3pm).

It's pay on the day only for our last match before Christmas, with tickets available from cash turnstiles at the Shay.

We've been allocated a minimum of 1,500 tickets, which are split between seats in the East Stand Northern Corner and spaces in the North Terrace Eastern Corner.

*Must be purchased with an adult ticket.

In line with FC Halifax Town’s policy, tickets for supporters with a disability and their personal assistants are available to those claiming Disability Living Allowance at the middle/higher rate (or PIP advanced rate).

Tickets for disabled supporters can be obtained from FC Halifax Town's reception on matchday.

They are available at the appropriate age-related price for the disabled supporter, with a personal assistant ticket issued free of charge.

Official away travel will depart from near the club shop on Meadow Lane at midday.