Notts County host Wrexham on Sunday as they look to record back-to-back wins.

The Magpies achieved their first victory of the campaign with a 2-0 success in Harrogate on Tuesday night and will be looking to pick up three points in front of a home crowd for the first time this season.

Wrexham, meanwhile, have earned two wins and a draw from their opening four matches and last year’s fourth-placed side occupy eight position prior to this weekend’s fixtures.

Both teams were included among the bookies’ favourites for promotion ahead of the season and, with a big crowd anticipated, it should be an exciting Sunday at Meadow Lane.

“We don’t want to win one and then lose the next – we want to stick a couple of results together.

“Two victories on the spin would be fantastic because that’s the kind of thing that builds momentum and takes that bit of pressure off.

“Wrexham are a very good team who play good football. They’re a side you expect to be in the mix.

“We need to look at what we’re not doing well – although we won a game, we’re not a fantastic team at the moment.” 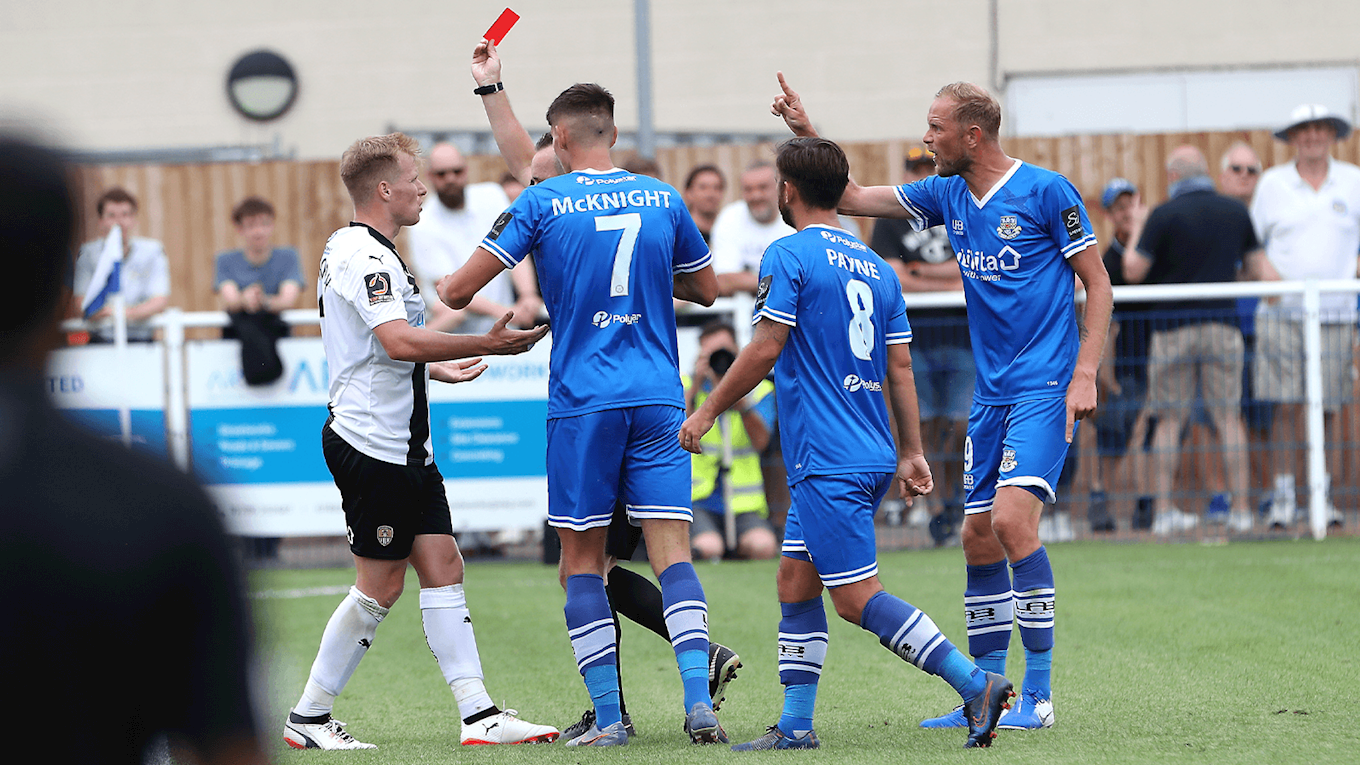 Michael Doyle and Damien McCrory are both available for selection again for the Magpies having served their three-game suspensions.

Jim O’Brien will hope to have recovered from the hamstring injury he picked up against Barnet last weekend and Ardley has admitted he has decisions to make given the hectic schedule to start the season.

Wrexham will be without centre back Jake Lawlor, who was sent off in their midweek win over FC Halifax Town.

At the other end of the pitch, Mark Harris will expect to start again having scored in each of his last three appearances following a loan move from Cardiff City.

Last time the sides met in Nottingham, a late strike from Neil MacKenzie saw Notts take the points after Spencer Weir-Daley’s opener had been cancelled out by Silvio Spann in October 2007.

Wrexham have won just two league matches at Meadow Lane in 24 attempts, the most recent of which coming on 16 August 2003.

Notts County could count themselves unfortunate to be held to a 1-1 draw by Wrexham on Sunday.

The Magpies had the better of the affair and deservedly went ahead midway the second half when Kristian Dennis nodded home his second in as many games.

But Wrexham levelled against the run of play five mintues later through Devonte Redmond to deny Notts all three points.

Neal Ardley made four changes to the side victorious at Harrogate in the week as Wes Thomas came in for his full debut, while Sam Graham returned to the defence. Damien McCrory and skipper Michael Doyle went straight back into the starting line-up after serving three-match suspensions for red cards on the opening day of the campaign.

Wrexham-born Connell Rawlison started at right back, with Ben Turner completing a four-man defence in front of Sam Slocombe. Mitch Rose partnered Doyle in central midfield with Enzio Boldewijn and Regan Booty on the flanks, while Dennis joined his former Grimsby team-mate, Thomas, in attack.

Nathan Tyson, Sam Osborne and Zoumana Bakayogo dropped to the bench, where they were joined by Jim O'Brien as he continues his comeback from injury, while Dion Kelly-Evans missed out with a knock.

Wrexham's James Jennings headed over from a corner inside the opening 90 seconds but, much like in midweek, it was the Magpies who dominated the early proceedings.

Booty looked intent on marking his home debut with a goal and, just three minutes in, had an opening after Dennis held the ball up well to feed him in space outside the area - the midfielder wildly miscued his shot, though, and it went high and wide.

Shortly afterwards, he was stood over a free-kick which Rose had won following an eye-catching nutmeg on the edge of the box. Booty opted to cross towards the back post, with Turner his intended target, but he got too much on the set piece and the ball went behind.

Next it was Thomas looking to mark his home debut with a goal, combining well with Boldewijn and Rose before spinning his man on the edge of the area to work space to shoot. He didn't get hold of his strike, however, and Christian Dibble got down to make a comfortable save.

The Wrexham stopper was called into more notable action by Booty in the tenth minute when Boldewijn cut in from the right flank before laying off for the 21-year-old. He looked to bend an effort into the bottom left corner and Dibble had to make a smart stop to turn the ball behind for a corner.

A flurry of set pieces followed, culminating with Turner climbing highest to power a header towards goal, which Jennings had to volley clear from just in front of his own goal line.

There was no question that Notts were having the better of the opening quarter of an hour and again went close to the lead they deserved on 13 minutes. It came from a Rose nutmeg once again as the midfielder drove through the centre of the park before feeding Thomas, who beat his man for pace and sent a cross-shot across the face of goal, which went just past the post with Dennis looking to get a telling touch.

The pattern of the game slowed from that point and both teams found chances difficult to come by until the 38th minute when, on a rare foray forwards, Wrexham had a sight of goal through JJ Hooper but his shot was blocked by his own man and Notts cleared.

That seemed to spark the Magpies back into life and, moments later, Rose went within a whisker of opening the scoring. He showed excellent control to bring a high ball down in the middle of the park, before send a fiercely-struck half-volley inches wide of Dibble's post.

Just before one minute of added time was indicated, the Wrexham stopper was called into more serious action by Thomas when the striker burst past a couple of defenders to get into the box on the left-hand side. Dibble came out to meet him and did well to deny the home debutant one-on-one.

That proved to be the last action of a half that Notts, without doubt, had the better of but they couldn't make a breakthrough.

Wrexham were quick out of the blocks following the interval and put the Magpies under pressure from a couple of set pieces, but the home side dealt with them well before resuming their search for a goal, which they went close to on 49 minutes.

Boldewijn popped up on the left-hand side and was fed by Dennis, which gave him the chance to drive into the penalty area. He took the ball to the outside of his man and shot on his weaker left foot, sending the ball narrowly wide of Dibble's top corner.

Just before the hour, Wrexham's Mark Harris did well to beat a couple of defenders and work his way into the box but, as he lined up a shot, Turner came across to make an excellent challenge.

Moments later, the visitors went as close as they had, when a sustained attack down the left saw the ball worked inside to Luke Summerfield. The central midfielder shot from just outside the area and his effort was only narrowly wide of the target.

The Magpies were sprung back into action and, just before Rawlinson was booked, good pressure from Dennis saw Michael Chambers' clearance rebound into Thomas' path. The striker burst forwards and must have thought he was about to open his Notts account, but a great recovering block by Wrexham captain Shaun Pearson denied him.

He had an even better opening on 67 minutes when Booty's perfectly-weighted through ball sent him in behind the Red Dragons backline but he fired over the bar.

His strike partner made no mistake moments later, though, when Booty once again turned provider. His sensational deep cross was misjudged by Dibble, and Dennis came steeling in behind the keeper to nod the Magpies into the lead.

Booty was having all kinds of joy and had the Wrexham goalkeeper scrambling on 72 minutes as the ball was worked to him following an excellent break but his left-footed shot went just wide of the top corner.

He had a go with his right foot moments later after showing excellent footwork to beat a couple of defenders, but his shot went straight at Dibble who held.

Then, against the run of play, Wrexham levelled on 74 minutes. Redmond grabbed his first goal since signing from Salford with a well-struck effort from the edge of the area, which Slocombe could do little about.

Ardley responded by sending Tyson and O'Brien on for Dennis and Booty and the two combined to great effect almost instantly. The Scot sent a low ball into the feet of the striker but he fired over from the penalty spot when he was in space.

Notts looked the more likely as the minutes ticked away and Boldewijn could have had his third in as many games on 88 minutes when Thomas released him on the right side of the area - his left-footed shot went straight at Dibble, though.

Sam Osborne replaced Thomas just before four minutes were added on, which passed by without incident as both sides took a point.

The club are serving up a delicious Sunday dinner ahead of the match.