Notts County travel to Ebbsfleet on Saturday for their first game of a busy bank holiday weekend.

The trip to Kent is quickly followed up with another game on Monday as they play host to Chorley, giving the Magpies the opportunity to pick up six points in 48 hours.

Last weekend’s draw with Wrexham came five days after Notts’ first win of the season, meaning they will look to go three matches unbeaten when they travel to the Kuflink Stadium.

Ebbslfeet, on the other hand, are still awaiting their first points of the campaign, having lost all five of their matches.

They currently prop up the Vanarama National League table after going ahead at leaders Solihull Moors last weekend only to surrender their advantage and slip to a late defeat.

“When you think things are going well, you have a different challenge thrown at you.

“It’s the physical teams that we need to match and Ebbsfleet will certainly give us that kind of test on Saturday.

“It’s difficult when you haven’t picked up any points but they’ve been unlucky in some of their games.

“They’re a strong and powerful team and it will click I’m sure. I just hope it doesn’t on Saturday."

“We’re not a team that belongs at the bottom.

“As soon as we get a result, I think we’ll move on and go in the right direction – I’m pretty confident of that.

“It’s been a hard start on paper when you look at the table and see where Solihull, AFC Fylde, Bromley, Yeovil and Halifax are.

“That doesn’t make you feel any better because there are no easy games, but we have got punished for our own lack of concentration and that’s how football goes.” 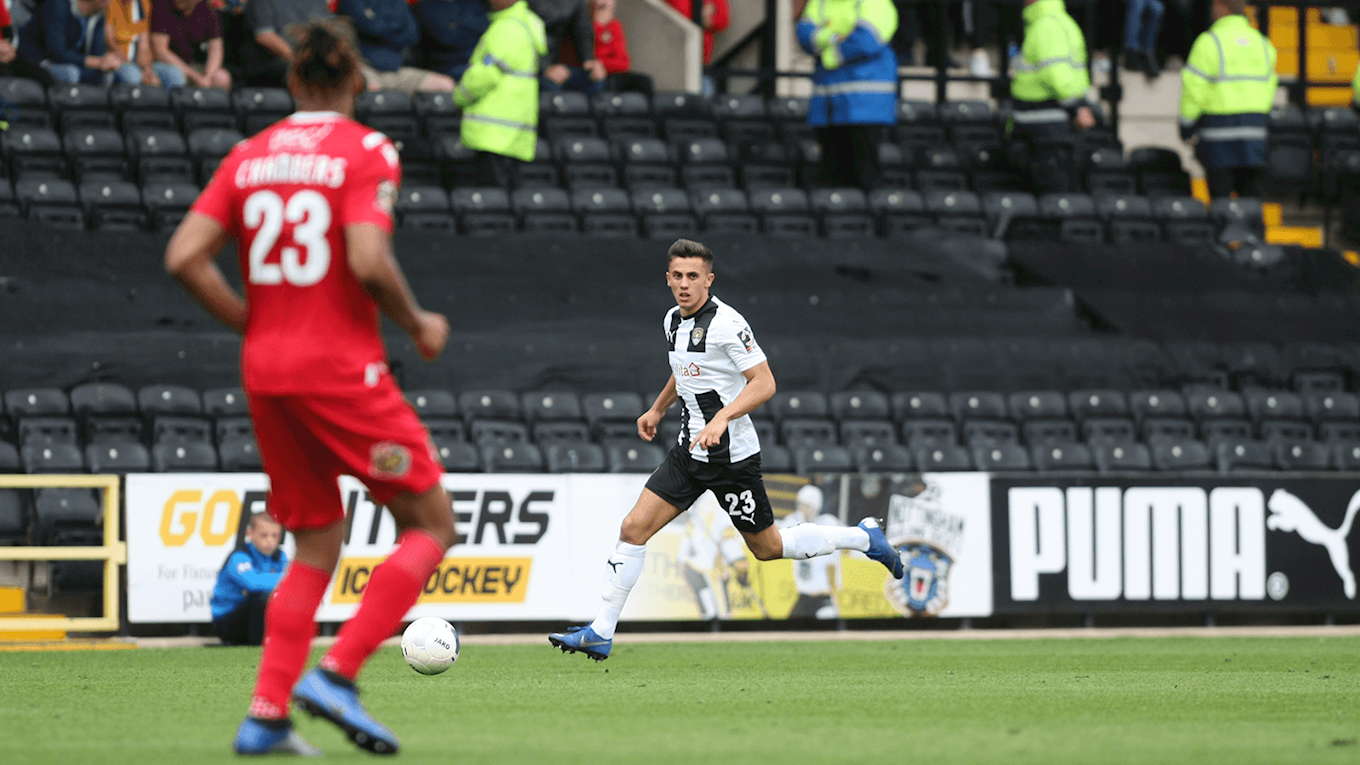 Ardley says Jim O’Brien, Nathan Tyson and Sam Osborne have shaken off the knocks that restricted them to a place on the bench against Wrexham and all three will hope for a place in the starting line-up.

Kristian Dennis will be looking for his third goal in as many games if selected, while Zoumana Bakayogo will be competing with Damien McCrory to regain his position on the left side of defence.

Ebbsfleet have brought in 14 new players since the end of last season and Hill says they are still taking time to gel.

One of those new additions is Alex Lawless, who is expected to return from injury to bolster the home side’s midfield.

The sides have met twice in FA Cup matches in the past, both of which were while Ebbsfleet were playing under their old name, Gravesend and Northfleet.

Notts won 2-1 in each fixture, with the first taking place in 2000 and the second three years later.

Ben Turner and Regan Booty scored their first goals for Notts County as the Magpies were held to a 2-2 draw at Ebbsfleet United.

The Magpies were twice in the lead but will have been disappointed to concede two sloppy equalisers in the shape of a scrappy Josh Umerah finish and a Jim O'Brien own-goal.

That meant the Magpies once again lined up with a flat back four featuring Connell Rawlinson, Sam Graham, Turner and Damien McCrory.

On a scorching-hot afternoon in Kent, Notts made a bright start to the game with Dennis, who moments earlier had had a penalty appeal waved away, drawing a comfortable save from Jordan Holmes from a tight angle.

Ebbsfleet soon demonstrated their own threat, however, as John Goddard produced an excellent run down the left before crossing for experienced midfielder Lawrie Wilson. His header looped towards goal but Graham positioned himself well to nod the ball away from danger.

And it was a header at the other end which gave Notts the lead their start deserved with 12 minutes on the clock. It came after the Magpies took a free-kick short to Boldewijn, who stood up the perfect cross for Turner to power the ball into the bottom corner.

The visitors mustered a succession of half-chances by way of response, one of which led to Sam Slocombe needing treatment after a collision on his goalline as he tried to deal with a high ball.

The keeper was fit to continue and, shortly before two minutes were added on at the end of the match, he saved Umerah's stinging long-range drive at the second attempt.

But, seconds before the half-time whistle was blown, Slocombe was kicking himself as he fumbled a cross, presenting Umerah with a chance to bundle the ball home following a scramble.

O'Brien was sent on in place of Rawlinson at the break as Ardley moved Rose to right back.

But it was the hosts who made a fast start to the second half as former Magpie Myles Weston raced away down the left and sent a dangerous cross into the middle. Turner got a crucial head to the ball but the danger wasn't over as it bounced across to Wilson. He guided an effort towards the top corner but Slocombe held on comfortably.

And Notts issued the perfect response moments later, releasing Boldewijn down the right. The Dutchman produced another superb cross which eventually found Booty at the back post. His well-struck effort found it way into the back of the net as the Magpies restored their lead.

It should have been three for Notts just before the hour - and it would have meant a hat-trick of assists for Boldewijn, who picked up the ball in space before threading a pass for Thomas to go one-on-one with Holmes. The forward showed good pace to get to the ball in time but he miscued his attempted lob, dinking the ball straight at the keeper.

And Notts were ruing that squandered opportunity as parity was restored in a moment to forget for O'Brien who, when trying to sweep up a loose ball in the Notts area, inadvertantly guided it beyond Slocombe and into the bottom corner of his own net.

The Magpies' frustrations were palpable and Doyle went into the book for dissent after O'Brien had been penalised for a foul on halfway.

Perhaps sensing an opportunity to capitalise, Ebbsfleet pushed forward in search of the game's next goal. Weston may have got it had it not been for an excellent block by McCrory, who diverted his shot on to the roof of the net.

Moments later, Graham made a similarly important intervention when he got across to his near post to turn Aswad Thomas' dangerous low cross behind for a corner.

Notts composed themselves after that and had a good chance to regain the lead when McCrory whipped in an excellent cross for Dennis. The forward had plenty to do to convert with his head but will have nevertheless been disappointed to send the ball over.

That was to be Dennis' last action as he was replaced by Nathan Tyson and his strike partner, Thomas, came within inches of grabbing his first goal for the club when his left-footed effort from inside the area clipped the outside of the post on its way out for a goal kick.

United substitute Gozie Ugwu bent a long-range effort wide before the game entered its final throes with everything in the balance.

But, despite four minutes being added on at the end, neither side were able to find a decisive goal.

Tickets for Notts County’s Vanarama National League trip to Ebbsfleet United on Saturday 24 August will be available on the day only.

Cash turnstiles will be in operation at the Kuflink Stadium.

Disabled supporters are advised to contact the Notts ticket office by calling 0115 955 7210.