The Magpies are looking to bounce back from a New Year’s Day defeat to Oldham and pick up their first win of 2019 at the JobServe Community Stadium.

The festive period wasn’t a kind one for Notts who took just one point from a possible nine and currently prop up the League Two table.

Colchester had an equally challenging schedule over Christmas, with exactly the same results as Notts from their outings.

A 2-1 defeat at home to Stevenage on Boxing Day was followed by a goalless draw with Morecambe in front of their own fans, before a 2-0 loss at Crawley on New Year’s Day – sounds familiar, right?

That run saw the U’s drop out of the play-offs for the first time since the opening weeks of the season.

Notts could climb out of the relegation zone with a win and Colchester can return to the top seven if they take three points on Saturday.

“Colchester have been very good and had a strong start to the season so I’m sure the blip they’ve had over Christmas won’t last.

“They have some really good players and try to make the pitch big so we need to work as hard as we have against Bury and Tranmere recently.

“We’re running more in the last few weeks and if we are focused, show the right energy and defend well we can beat anyone.

“We need to start picking up points quickly and I will do everything in my power to build the right mentality and momentum that will carry us through.” 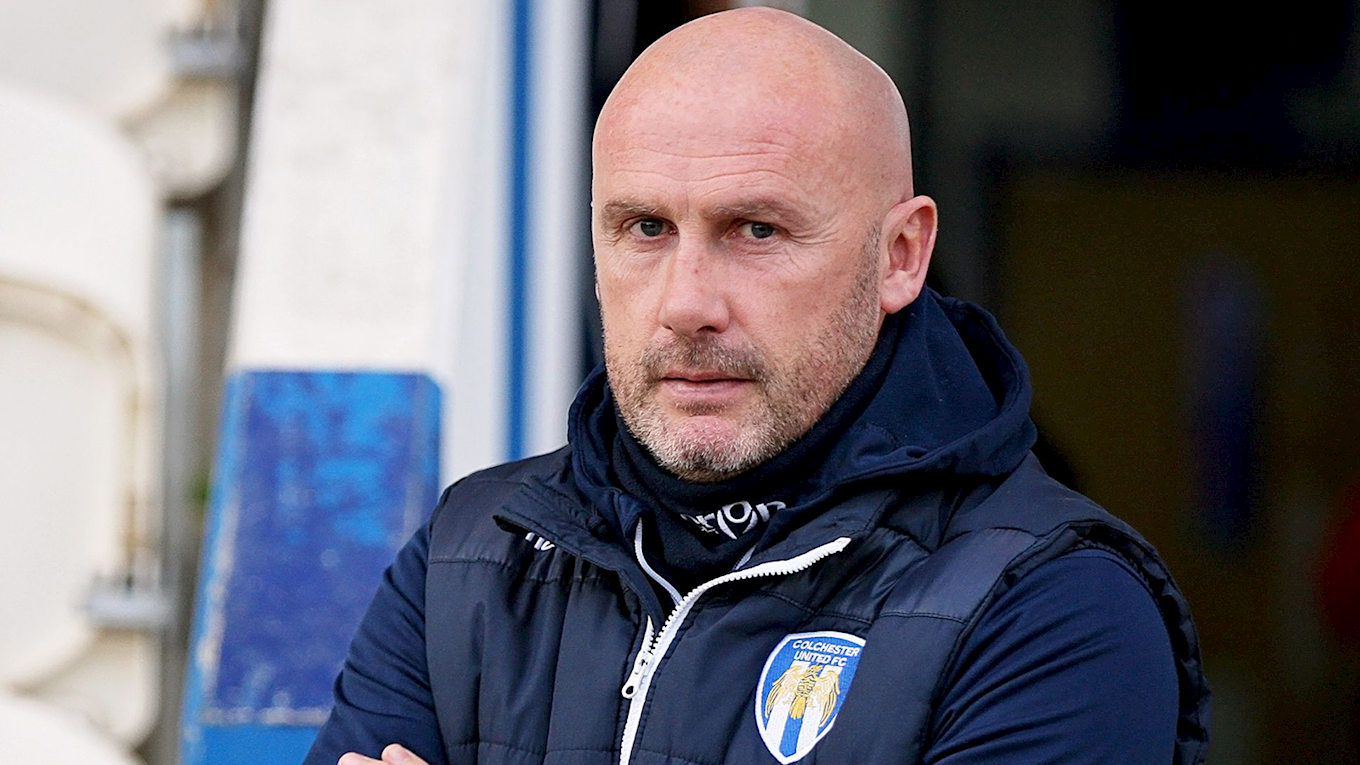 “This is a really tight division and Notts County are a huge club that are scrapping for their lives so it’ll be a difficult game for us.

“We feel a bit hard done by recently and the only way to change that is to continue to work hard and that’s what we intend to do.

“It’s a test of character for all of us as we’re now the chasers because we find ourselves out of the top seven for the first time in a number of months.” 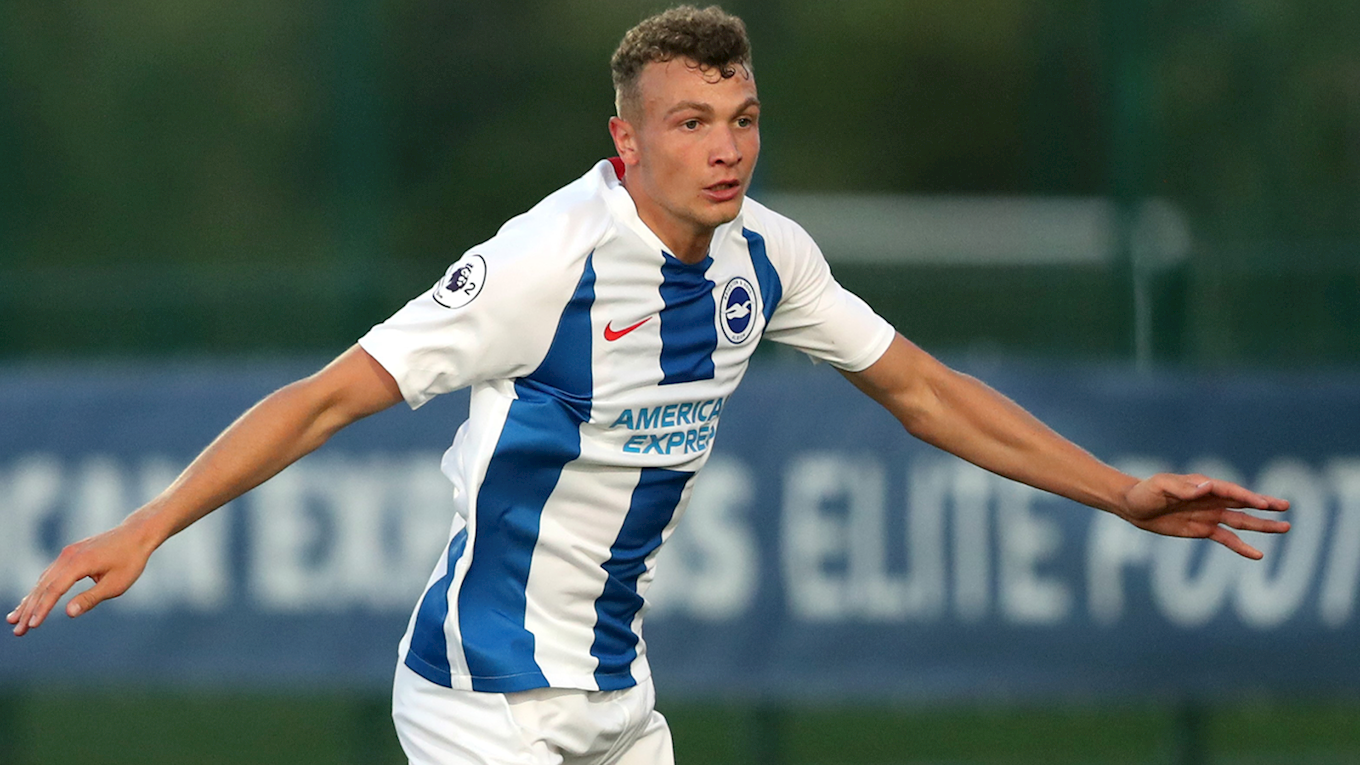 Defenders Keston Davies and Ben Hall have returned to their parent clubs but new loan signing Ben Barclay is available for selection straightaway and will push for a start at centre-back.

Christian Oxlade-Chamberlain misses the match through suspension so Notts will hope Matt Tootle has recovered from the injury that forced him off at half-time of Tuesday’s loss to Oldham.

Tom Lapslie has been a key part of the Colchester midfield this season and signed a new contract earlier in the week.

Winger Aaron Collins’ loan has come to an end, Frankie Kent is suspended after being sent off at Crawley and captain Luke Prosser came off injured on New Year’s Day. 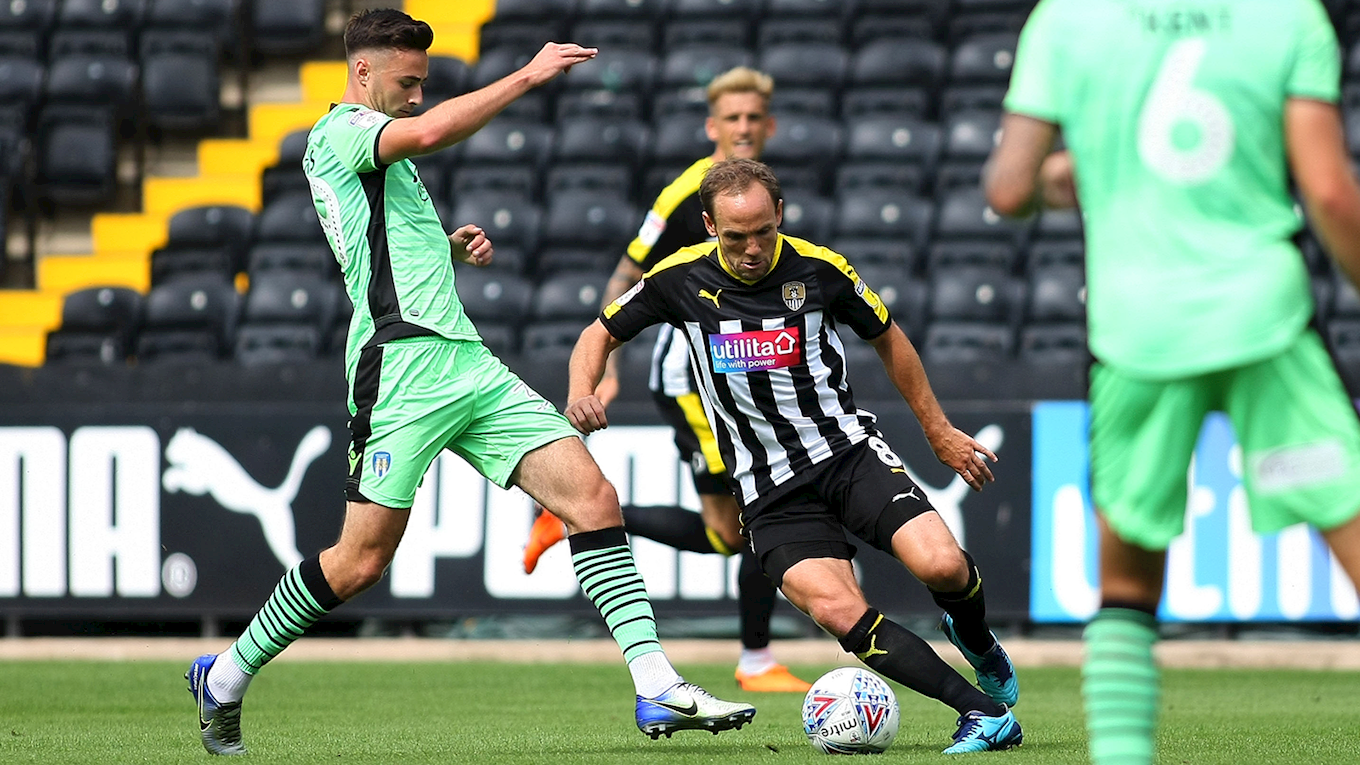 Notts have lost just once in their last 12 meetings with the U’s, winning 10, with the most recent clash ending goalless on the opening day of this campaign.

The Magpies came from a goal down at the break to run out 3-1 winners last time they visited Colchester with Jonathan Forte, Shola Ameobi and Richard Duffy getting the goals in April 2018. 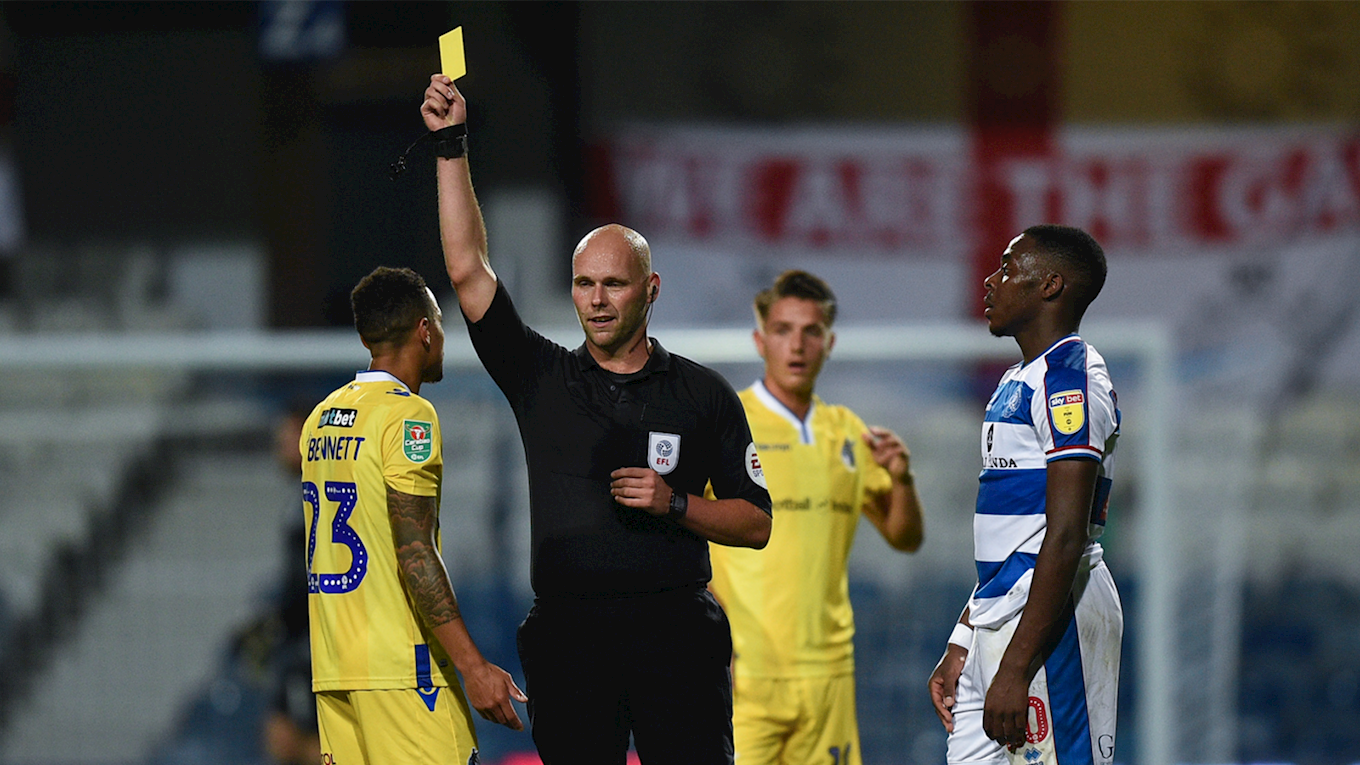 Notts are the only side in the bottom five to be playing away this weekend.

Sol Campbell’s unbeaten home record with Macclesfield will be tested by Swindon, while Yeovil will hope to end their nine-game winless run when they host fourth-placed Bury.

Cambridge – who travel to Meadow Lane next weekend – look to bounce back from their 6-0 defeat at MK Dons on New Year’s Day when Stevenage visit the Abbey Stadium, while Morecambe face Crewe at the Globe Arena.

Notts County were held to a 3-3 draw on a dramatic day at Colchester United's JobServe Stadium.

Goals from Jon Stead, Dan Jones and Kristian Dennis had fired Notts into a 3-1 lead after Sammie Szmodics netted an early opener.

But a lucky Mickael Mandron goal and a Harry Pell penalty levelled things up as both sides had to settle for a share of the spoils.

Neal Ardley handed a debut to new loan signing Ben Barclay, who lined up on the right hand side of a three-man defence which also included Richard Duffy and Pierce Bird.

With Matt Tootle deemed unfit to play, Cedric Evina slotted in at right wing-back with the returning Jones on the other flank.

Notts were otherwise unchanged from what was a disappointing New Year's Day trip to Oldham and they were immediately on the back foot at the JobServe Stadium as Szmodics fired the hosts ahead on eight minutes, sending the ball into the top corner with a first-time effort following Courtney Senior's cutback.

But the Magpies fought back immediately with a quickfire double that turned the match on its head.

The first came from Stead, who snuck in at the back post to bundle home Andy Kellett's corner for his 50th Notts goal.

And Ardley's men were ahead two minutes later when Stead released Kellett into the area. The midfielder's cutback just evaded Dennis near the penalty spot but Jones had anticipated the chance, running on to the ball and smashing it home via the underside of the bar.

Barclay had to make a crucial intervention to deny Frank Nouble with 27 minutes on the clock, sliding in to take the ball off his toe after Mikael Mandron had crossed low into the danger zone.

But Notts were refusing to sit back and got the third goal their endeavour deserved on 32 minutes when Rob Milsom pounced on Jones' half-cleared cross to supply Dennis, who lashed the ball home with a low, left-footed effort inside the area.

It looked like the Magpies were heading into the break with a two-goal lead but, deep into two minutes of added time, the hosts pulled one back in the most fortuitous of circumstances as Duffy's attempted clearance cannoned off Mandron and beyond the helpless Fitzsimons.

Half-time brought no Notts changes and Ardley's men were under the kosh after the restart, Luke Prosser seeing a headed effort disallowed for offside.

Ardley made a double change shortly before the hour as Dennis and Kellett made way for Jamie Turley and Nathan Thomas.

Turley slotted in at right back as Notts switched to a flat back four, with Duffy shielding the defence in a holding midfield role. Thomas went to right midfield with Jones on the opposite flank.

But the hosts kept up their pressure despite the change and, shortly after they'd had handball appeals waved away when a Notts man blocked a goalbound header on the line, the referee pointed to the spot when Senior went down under a challenge - possibly from Duffy - in the area. Pell remained calm among the chaos to dispatch the penalty.

Lewis Alessandra completed his return from injury by replacing Vaughan and the match regained a degree of balance following a frenetic spell.

The game went into four minutes of added time with the score still locked at 3-3, during which Pell went into the book for a poor challenge on Bird.

And there was to be no winner as the Magpies had to settle for a point on the road.

Notts have received an initial allocation of 450 reserved, covered seat tickets located along the side of the pitch in the Jobserve East Stand. An additional allocation of tickets is available if required.

Tickets can no longer be posted for this fixture. Supporters who are unable to get to Meadow Lane can purchase online or call 0115 955 7210. Tickets can then be collected from Colchester on the day of the game.

Category two seats are located closer to the halfway line and are therefore more expensive. 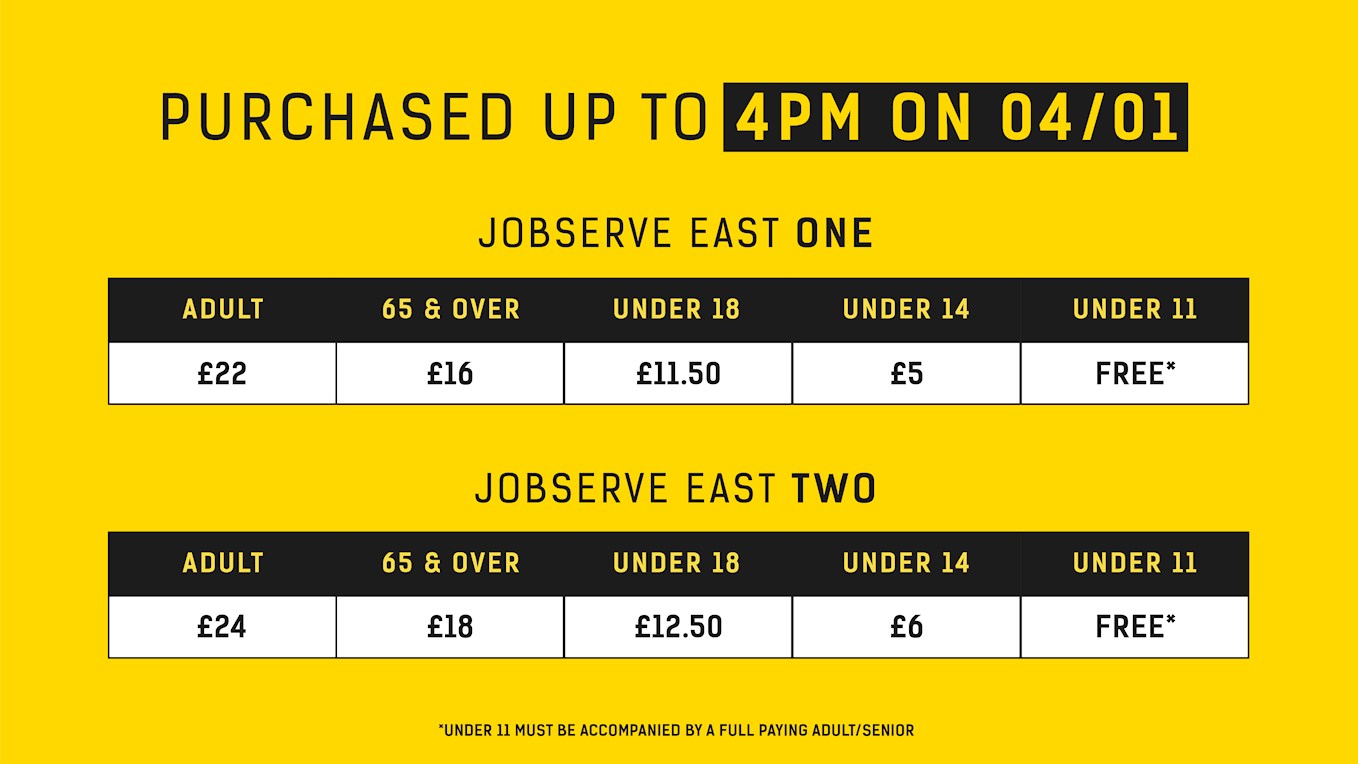 *Under 11 must be accompanied by a full paying adult/senior.

Tickets for away fixtures can be purchased online, by calling 0115 955 7210 or visiting the club shop/ticket office.

In line with Colchester’s policy, tickets for supporters with a disability and their personal assistants are available to those who receive the middle or higher rate of Living Allowance or equivalent.