The Magpies backed up their 3-1 win over Cheltenham last weekend with a point away at Yeovil in midweek and now return to home soil looking to end a busy week with another positive result.

However, they face difficult opponents in the U's, who arrive at Meadow Lane in fine form with one defeat in their last 10 league outings.

They come into the game having kept three clean sheets in succession since being knocked out of the Emirates FA Cup in the first round by Oxford City, who Notts host next weekend in round two.

John McGreal's team have been decimated by long-term injuries to key players but, despite that, the Essex outfit are two points outside the play-off places.

Adult tickets for the game are priced just £10. Click here for more details. 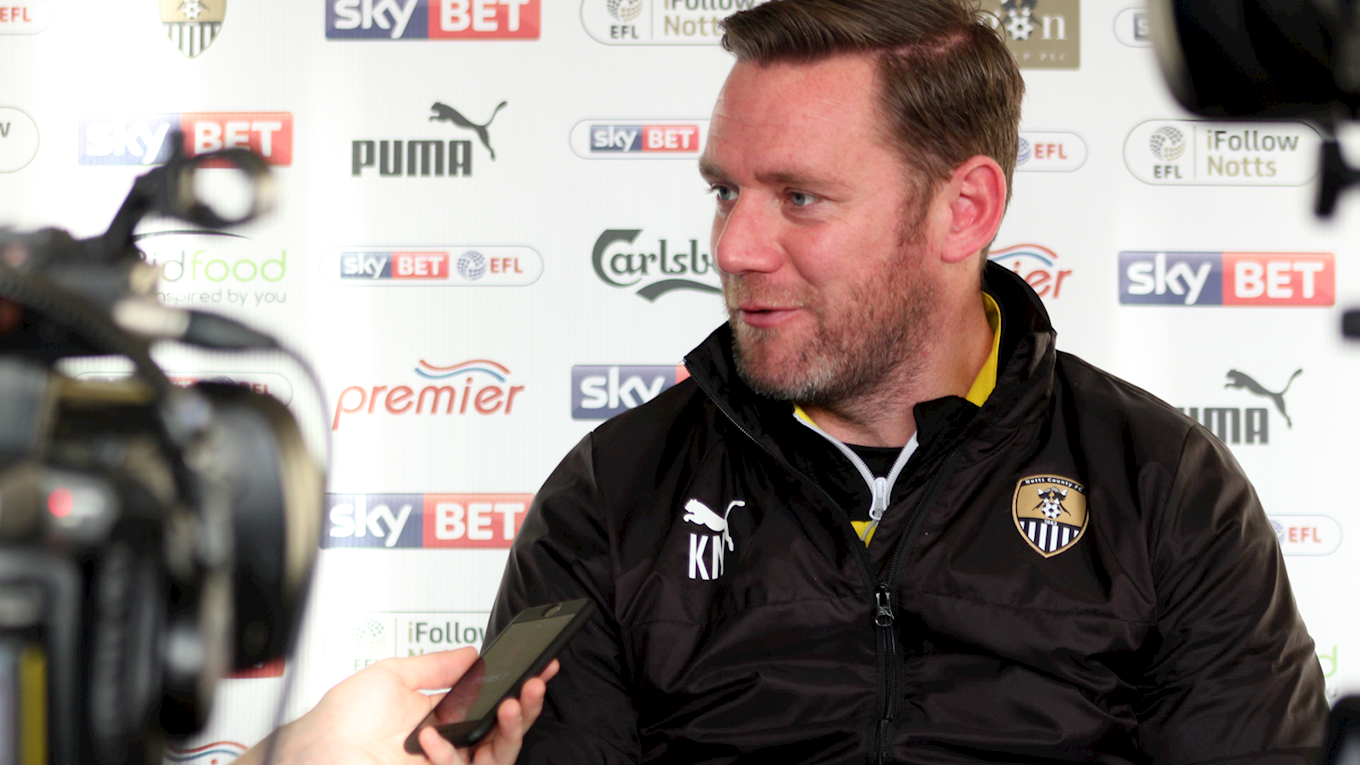 "They've got a good side and were unlucky not to make the play-offs last year. I expect them to be there or thereabouts again this season

"It won't be an easy game. They've kept three clean sheets in a row, they play some good stuff and have players who are in form. We'll be well-prepared and well-drilled." 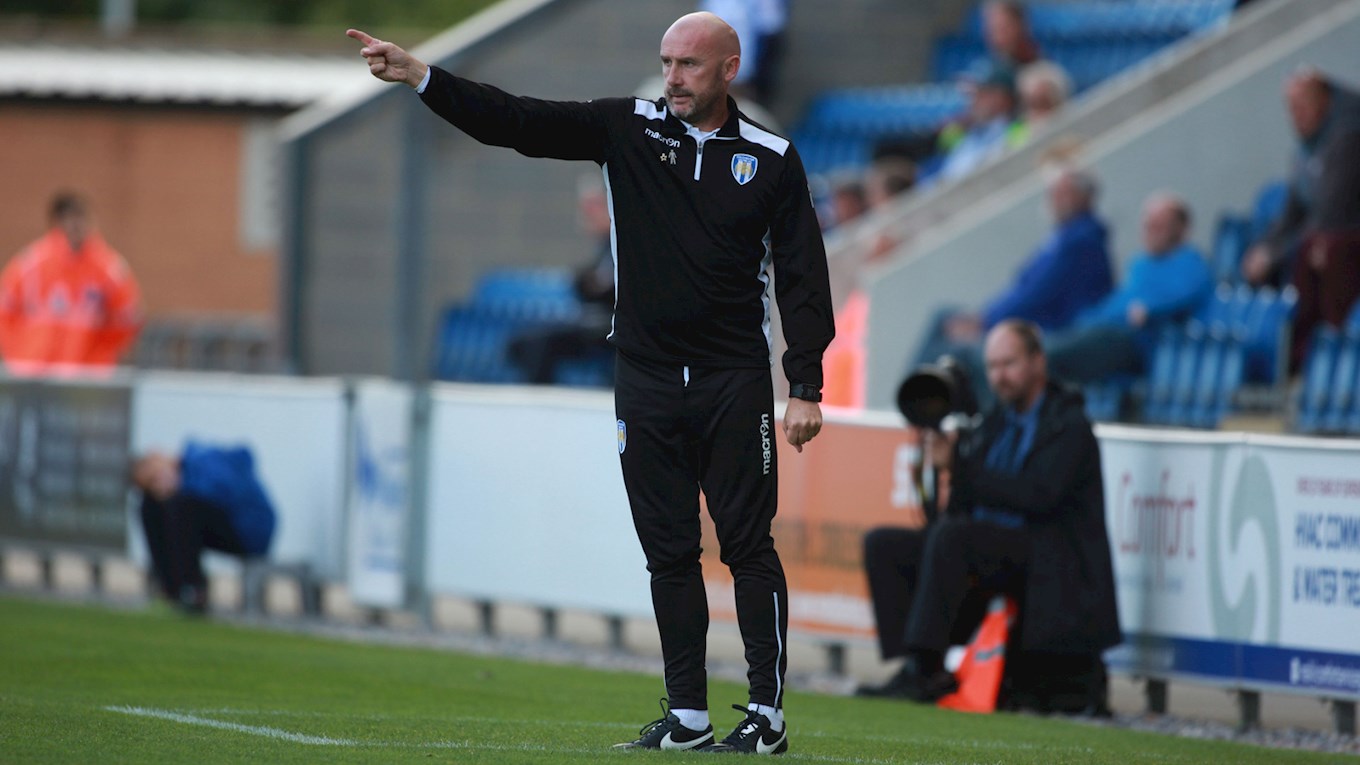 "Kevin Nolan is doing a terrific job. He got them off and running and he's continued that this season.

"They have quality players - you only have to look at the front two in Jon Stead and Shola Ameobi. We found it tough against them last season but it's a bit different now. We're in a bit of form but they're in great form too.

"They're joint-top and have had a great start. It should be a good game." 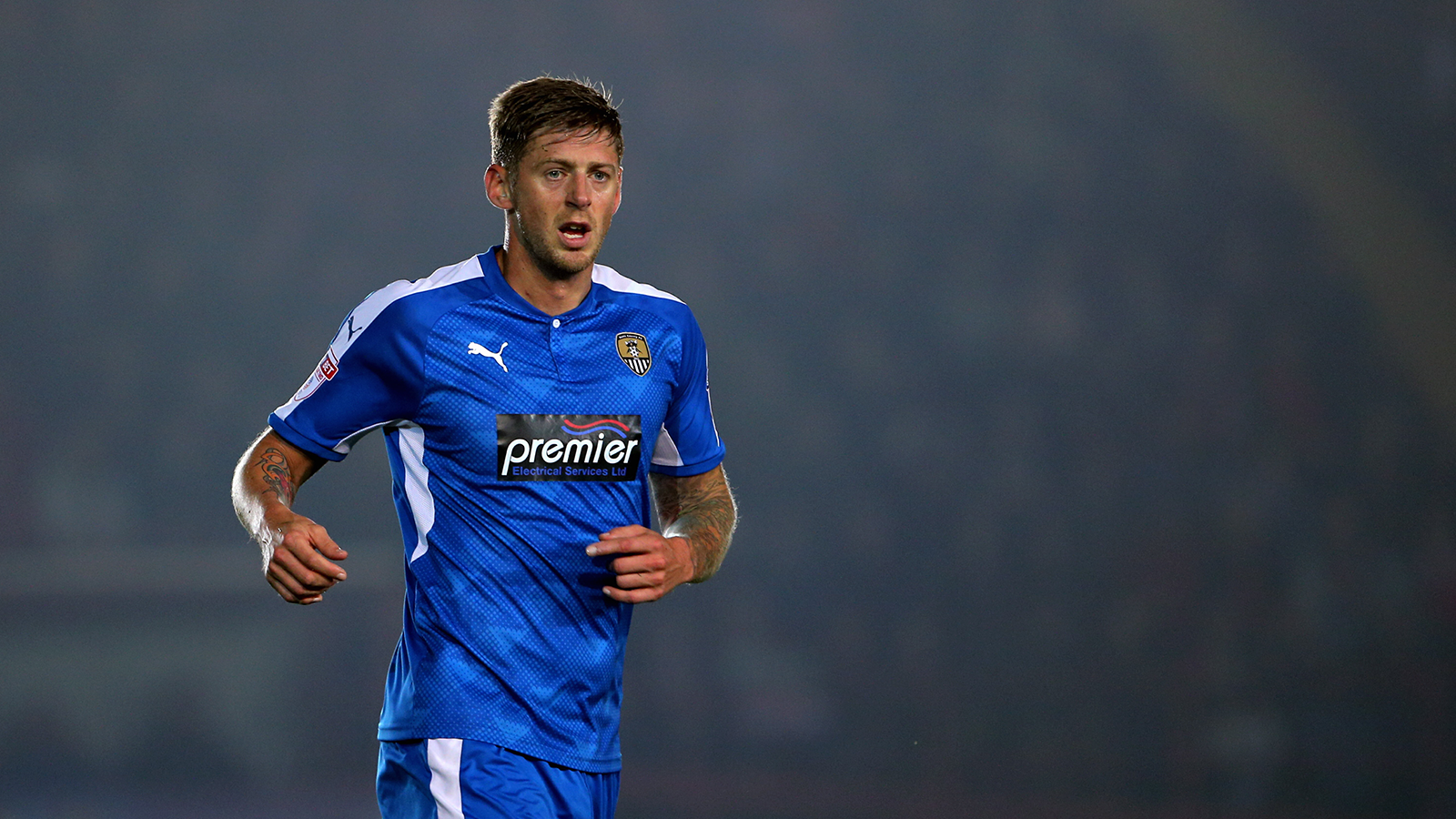 Stead could miss out after being withdrawn during the first half of Tuesday's 1-1 draw at Yeovil with a thigh injury but Shola Ameobi could replace him on the forward line after sitting out the trip to Huish Park.

Defender Dan Jones returned to training earlier this week but Adam Collin and Michael O'Connor remain on the sidelines with knee injuries.

For Colchester, midfielder Doug Loft suffered a slight tear in his bicep during Tuesday night's 1-0 win over Lincoln City with Brandon Comley in line to replace the former Port Vale man in the middle of the park.

Captain Luke Prosser has resumed training after a year out with a knee injury but the central defender will not be available for the trip to Meadow Lane, nor will Brennan Dickenson and Kurtis Guthrie, who scored 24 goals between them last season. 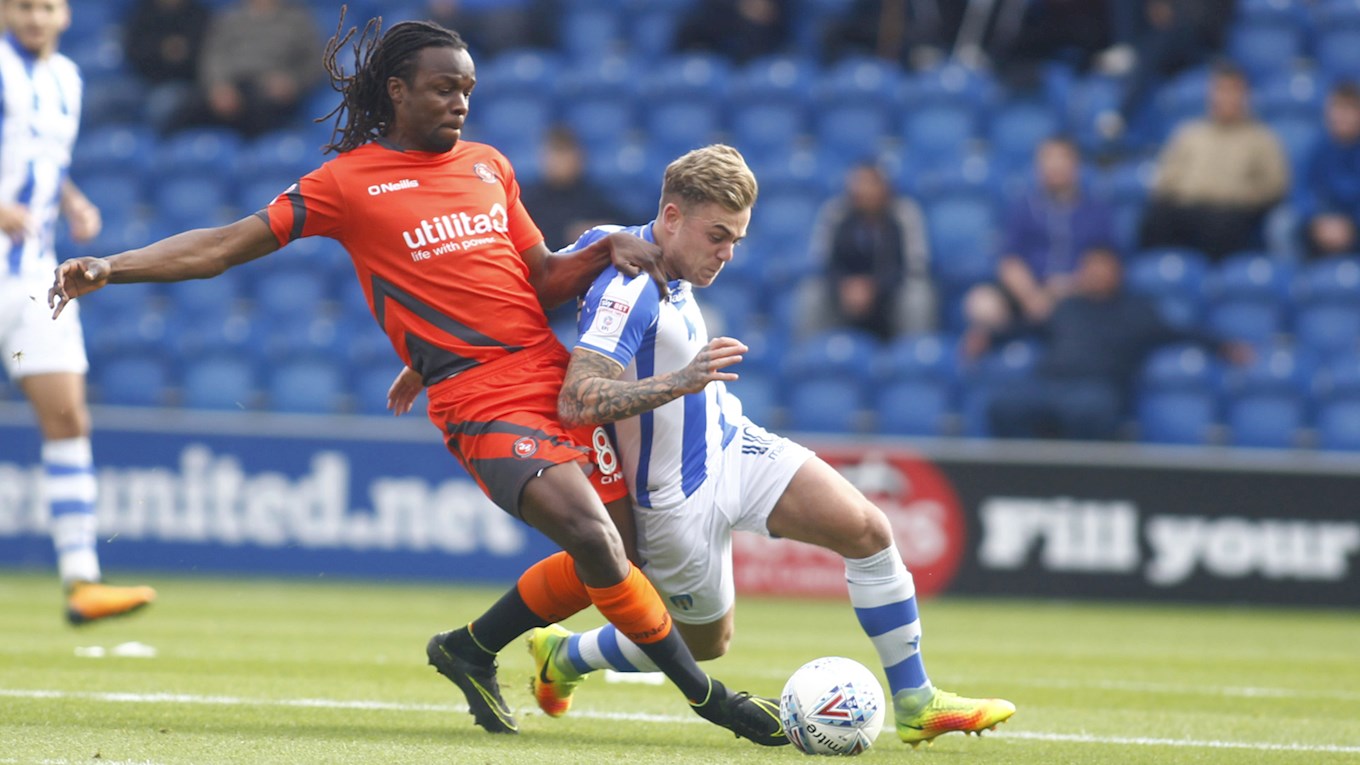 Sammie Szmodics is one of several homegrown players in the first team at the Weston Homes Community Stadium, though his career has been hampered by injuries thus far.

Last season saw the attacking midfielder have an operation on an ankle injury in December before breaking his leg against Crewe in March, limiting him to 23 appearances overall.

He returned from that setback in time for pre-season and has been making up for lost time this campaign, scoring six times in 14 matches to date.

With better fortunes from a medical point of view, it may not be long before Szmodics’ talents are being exhibited at a higher level.

Notts have an outstanding record against the Essex outfit, suffering just one defeat in their last nine meetings.

Colchester certainly do not enjoy coming to Meadow Lane, losing their past seven visits with their last win coming in November 2002.

Sky Bet have priced Notts up as 11/10 favourites to take all three points while the U's are 5/2 to be the first team this season to come away from Meadow Lane with three points in Sky Bet League Two. The draw is available at 12/5.

The Magpies have scored 11 goals in their past three home games and are 7/2 to score three or more goals again at Meadow Lane this weekend. 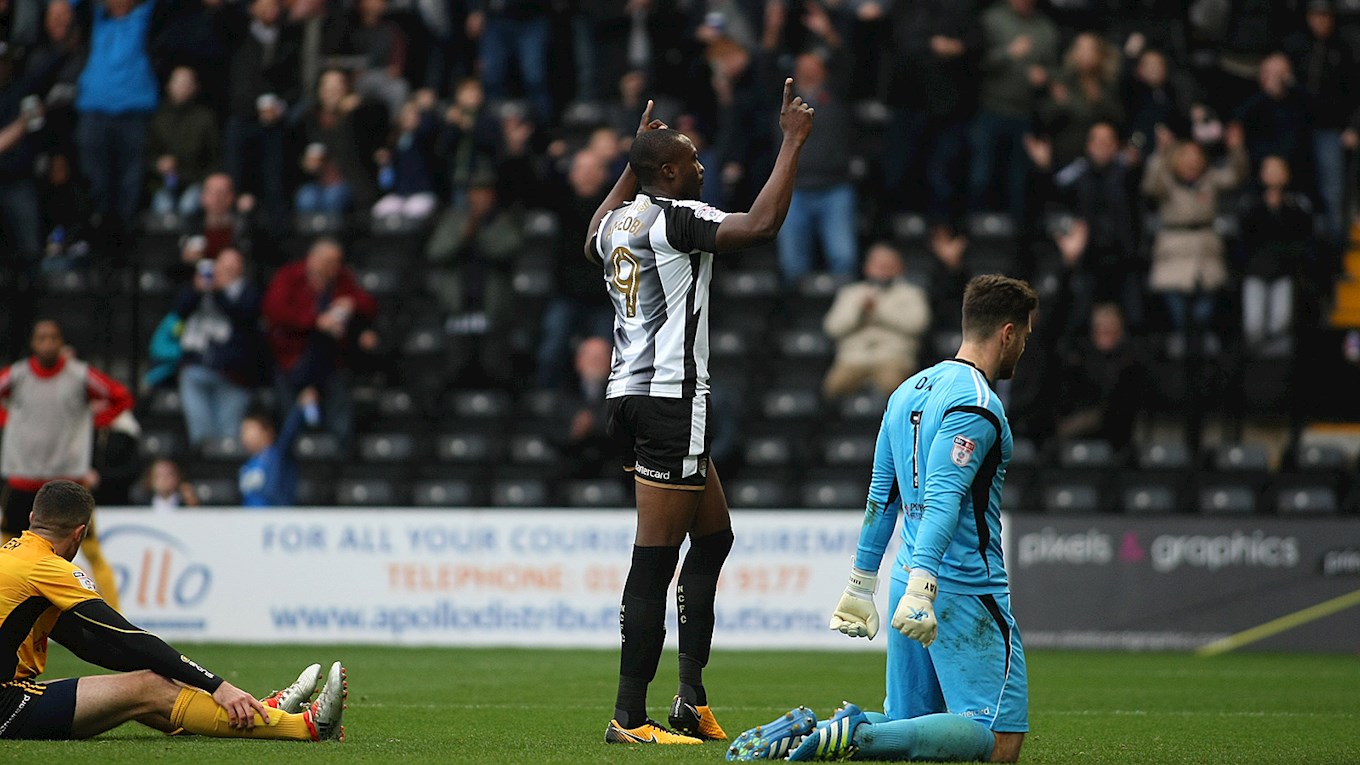 Shola Ameobi was on target with a brace against the U's in April and can be backed at 6/1 to score the first goal of the game or 12/1 to score twice again.

Elliott Hewitt scored his first Notts goal in the away fixture between the teams last season and would love to get another against his former team after opening his account for this campaign at Stevenage a fortnight ago.

The midfielder is 28/1 to open the scoring or 9/1 to find the back of the net at any time.

Notts County emerged 2-1 victors from a dramatic clash with Colchester at Meadow Lane.

All three goals came in the second half, Shola Ameobi firing home from the spot before the visitors won a penalty of their own.

Mikael Mandron saw his effort saved by Ross Fitzsimons but Sanmi Odelusi thought he had earned the visitors a late point when he slotted the ball home with a minute of normal time remaining.

Ryan Yates had other ideas, however, nodding the ball over the line in stoppage time to keep Notts level on points with league leaders Luton.

But Ryan Yates had other ideas, nodding the ball over the line in second-half stoppage time

Kevin Nolan made two changes to the side that drew with Yeovil in midweek.

Jon Stead, who limped off in the first half of that game, was replaced by Ameobi, while Elliott Hewitt returned to the side in place of the bench-bound Rob Milsom.

A minute later, Mandron struck the side-netting with the match's first shot of note before, shortly afterwards, Ryan Inniss headed the ball over from a corner.

The visitors kept up their pressure and were perhaps the masters of their own downfall when Mandron's goal-bound header was turned wide by his team-mate Tom Eastman.

Ryan Yates blazed a long-range effort over and Ross Fitzsimons collected a tame Mandron effort as the sides continued to exchange blows in pursuit of the game's opening goal.

And, shortly after Sammie Szmodics had curled the ball over Notts' crossbar, it was Colchester keeper Sam Walker's turn to make an easy save, holding on to Alessandra's side-footed effort from the edge of the area.

Walker made another simple stop from Yates' dipping strike and the keeper also claimed Jorge Grant's free-kick as half-time neared.

And 0-0 was how it stayed going into the break.

The sides reemerged for the second half unchanged and Notts had claims for handball waved away on 58 minutes when Alessandra's strike was blocked by a defender in the area.

Alessandra's frustrations were compounded moments later when he was inches away from converting Grant's low cross from close range.

Notts were beginning to dominate, Grant seeing a shot blocked before Carl Dickinson fired the ball straight at Walker on the follow-up.

Richard Duffy entered the referee's notebook for dissent before Ameobi came close to heading Notts into the lead, seeing his deflected effort drop just wide of the post.

But, at the resultant corner, Shaun Brisley was bundled over in the area and the former Newcastle man fired the ball into the top-right corner from the spot to make it 1-0 to the Magpies.

Ameobi was in the thick of the action once more, seeing yellow for his reaction after being fouled by Ryan Jackson. The Colchester man was also booked for his part in the melee.

It was turning into a frantic afternoon and the visitors were given a golden opportunity to restore parity with a penalty of their own after Grant was booked for a shoulder barge on Jackson in the area.

Mandron took responsibility for the spotkick but Fitzsimons dived to his left to push the ball away.

Nolan's first change saw Duffy hand Brisley the armband on his way off the field, with Milsom coming on. Elliott Hewitt dropped into the centre of defence.

With five minutes to go, Grant danced towards goal and was brought down by Frankie Kent 20 yards out. The defender was booked and Dickinson curled the subsequent free-kick over the bar.

Time was ticking away but, with Notts' lead so slender, anything could still happen.

And so it proved, when substitute Odelusi was played through one-on-one with Fitzsimons before slotting the ball low beyond the helpless keeper.

Notts were given five minutes added time to find a winner.

And Yates obliged, nodding the ball over the line after Grant's corner had been flicked on.

A nervy finale followed but Notts held firm to claim all three points.

The Magpies will be looking to continue their staggering home league form against the U's.

This is one of 11 fixtures to which season ticket holders can bring a friend or family member free of charge.

FREE face painting is on offer in the revitalised Haydn Green Family Stand, while kids can also attend the Skills Centre on the brand-new 4G pitch – just remember you need to bring a spare pair of clean trainers to take part!

All activities are included in the price of your ticket.