In January 2017, sitting 23rd in League Two and on a run of 10 defeats in a row, even the most optimistic Notts County fan couldn’t have imagined the ride which was in store for them over the next 16 months.

But with a new owner, a new manager, a mid-table finish and then a top-five finish this season, the prize of a place in the Sky Bet League One is just two games away.

Manager Kevin Nolan will now be urging his players to make the most of home advantage in the semi-final second leg tomorrow night.

The Magpies have lost just two of their home games this season, winning 14 and scoring 43 times. Coventry’s away form during this campaign has seen them win nine and lose nine, scoring 28 goals on their travels.

With more than 16,000 tickets already sold, the atmosphere inside Meadow Lane will be electric as County and City look to reach the final at Wembley.

The home fans can play a massive part once more. Raise the roof, sing your hearts out and let the nation hear you roar us to Wembley! 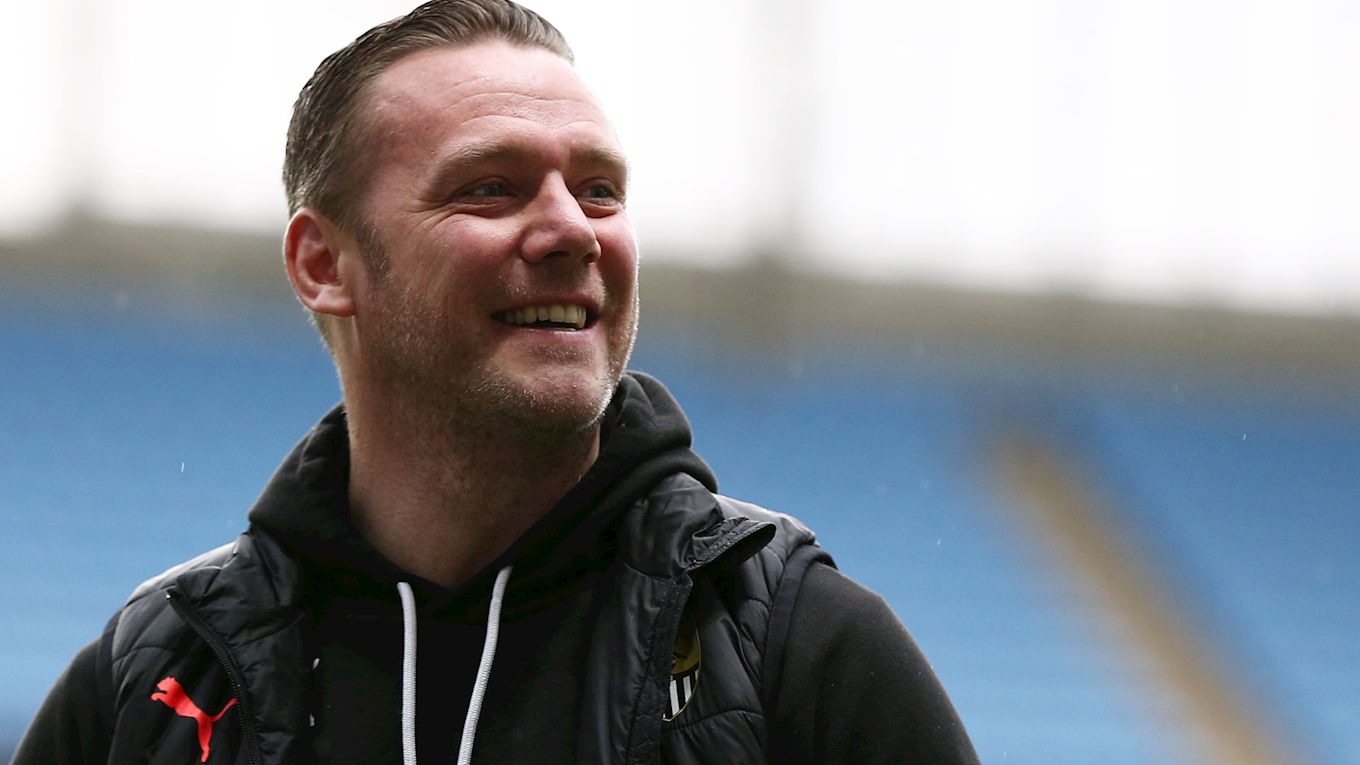 “I thought the turn-out of our fans was absolutely amazing at Coventry.

“What we want now is for them to pack Meadow Lane to the rafters because we’re going to need them.

“It was a fantastic performance from our lads, I thought they handled the occasion really well.

“The players did themselves, Nottingham and Notts County proud. We’re dreaming of Wembley now and we need everyone to be on our side to help us realise that dream.” 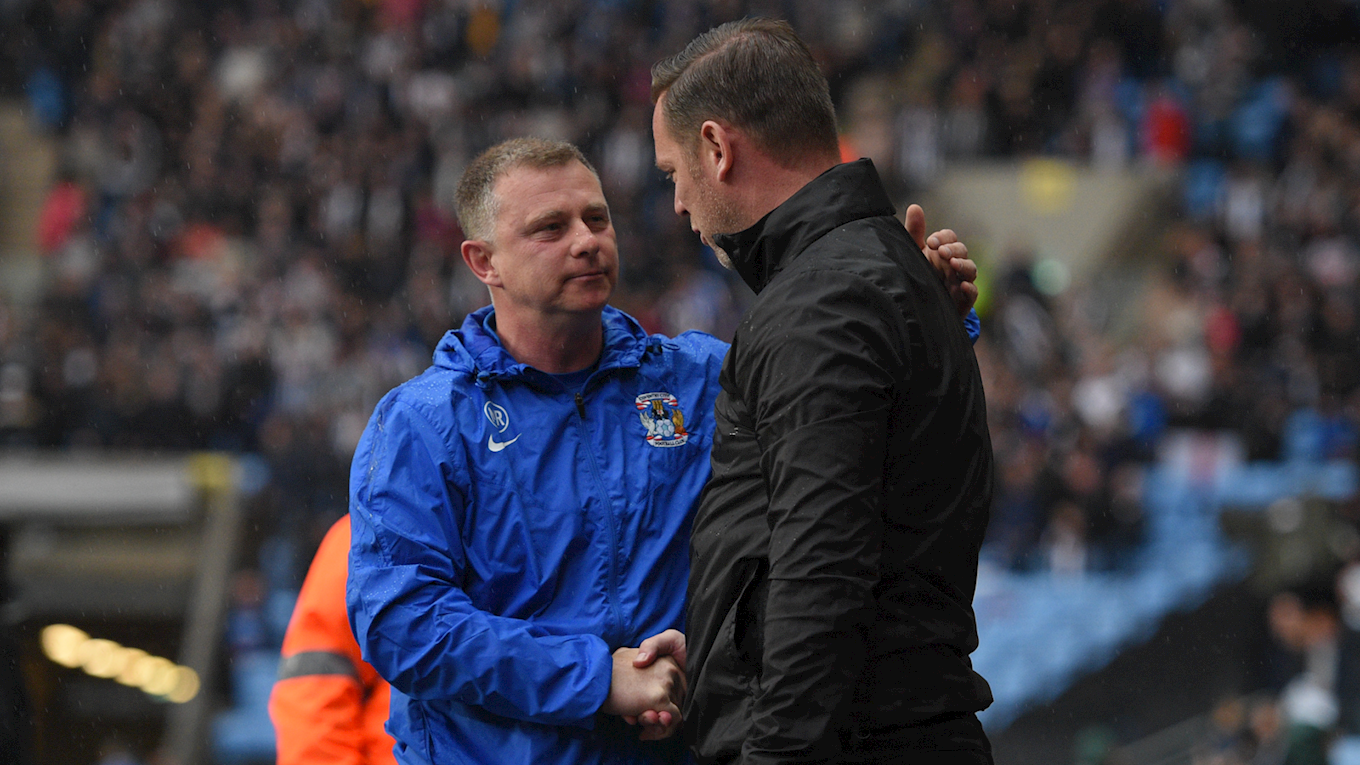 "We have had a mixture of rest, recovery and training this week. Ever since the game finished on Saturday we have been looking forward.

"We played really well in the first leg and only made one or two mistakes, but sadly that cost us a goal.

"We need to send our supporters home happy. It will be a good game and it might even go all the way. We need to be prepared for that." 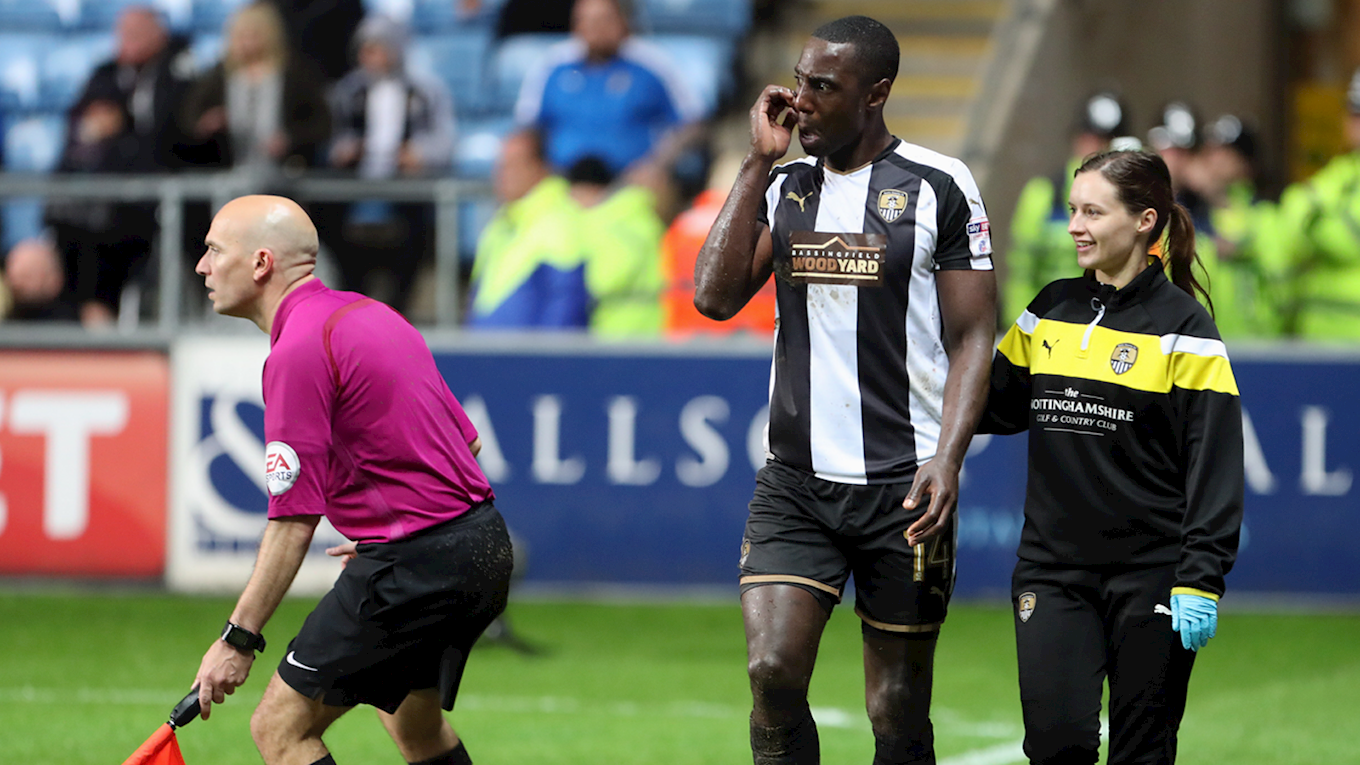 It remains to be seen whether Jonathan Forte, who in the first leg limped off in second-half injury time, will be fit to play, with Nolan saying 'We’ve had a few injuries - a few lads have missed training. We’ve got to give them another 24 hours but hopefully they’ll be okay. I won’t know until late on Thursday.'

Coventry will be without defender Tom Davies, who was given a three-match ban for his infamous stamp on Richard Duffy.

"Tom has been stupid and has apologised," said his manager. "He has hurt himself big time. If we progress then he misses the final.

"He cannot blame anybody but himself for it and he has been punished accordingly by the powers that be and the club too.

"On the injury front, there is nothing different. We still have the same long-term injuries." 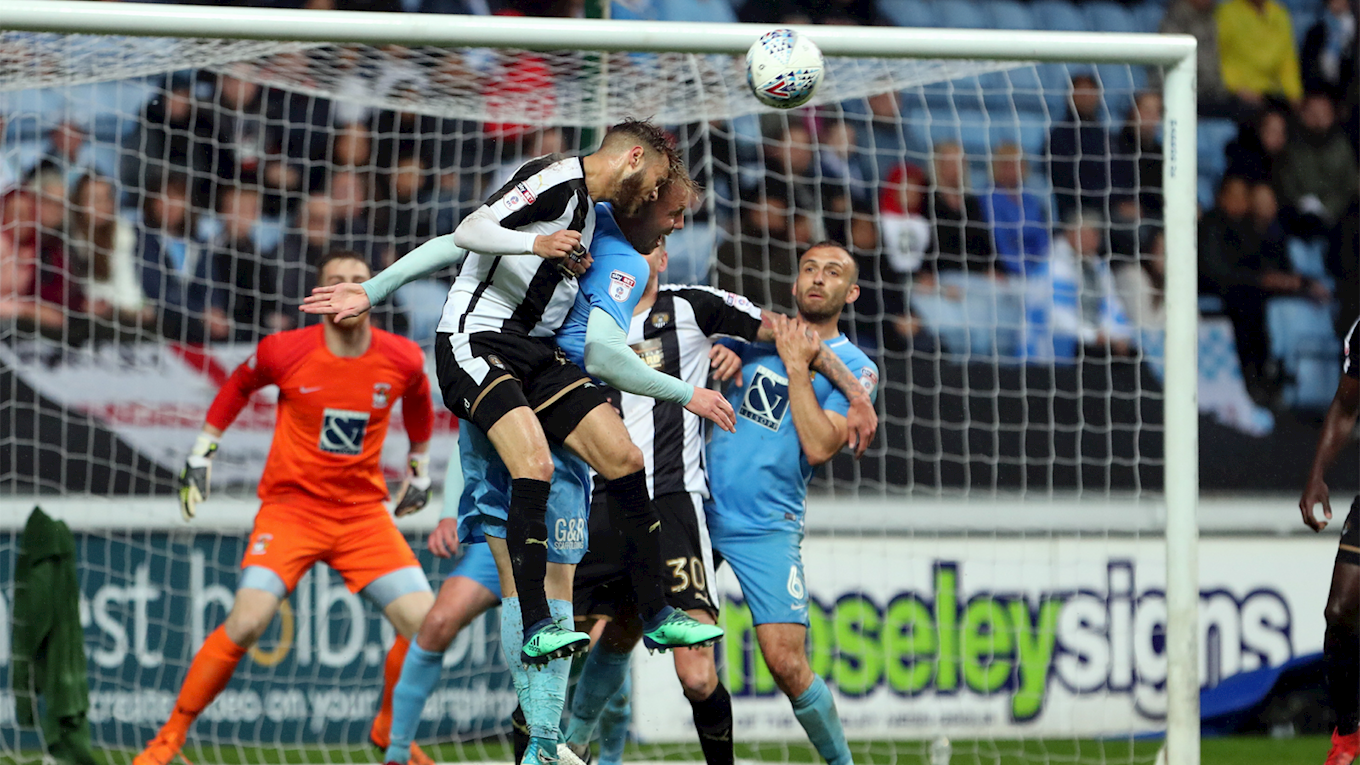 In last Saturday's first leg at the Ricoh Arena, Nolan’s side were looking good for a 1-0 win courtesy of Jonathan Forte’s superbly-taken goal until a contentious late penalty was awarded to Coventry.

Matt Tootle was wrongly penalised for his challenge on Sky Blues’ Tom Bayliss in the area and Marc McNulty stepped up to draw Coventry level from the spot, setting up what should be a thrilling second leg at Meadow Lane.

Sky Bet have Notts and Coventry both priced at 5/6 for the win. A goalless draw is 9/1.

If you think it will go all the way to penalties, both teams are priced at 11/1 to win that way.

Notts County were unable to end their season with a trip to Wembley as Coventry became only the third team to win at Meadow Lane this season as they triumphed 4-1 in the play-off semi-final second leg.

In the end the scoreline was emphatic, as Coventry displayed a ruthless touch in the box, but, as in the first leg at the Ricoh Arena, contentious decisions went against Kevin Nolan's side.

Last Saturday, an 87th-minute penalty for the Sky Blues robbed Notts of a 1-0 win, and in the second leg two massive decisions also went against them.

With the score 2-1 to Coventry, Jonathan Forte headed what would have been an equaliser, only to be ruled offside, though television replays showed he was clearly onside.

And in the build-up to Coventry's crucial third goal the television replay showed a Sky Blues player involved in the move to be offside, but play went on.

It was a bitterly disappointing end to the season for Nolan, who made one change to the side which played at Coventry, Lewis Alessandra replacing Matty Virtue in midfield.

Coventry were first to threaten in front of the crowd of over 17,600, Max Biamou challenging Adam Collin, but the keeper grabbed the ball at the second attempt.

The first corner went to Coventry in the sixth minute and saw them take the lead. The Notts defence failed to clear the ball and it fell for Biamou seven yards out and his overhead kick found the bottom corner.

Notts' first chance came in the 11th minute, but Dan Jones' teasing free kick into the box would not fall for Jonathan Forte and eventually a free kick was awarded to the visitors.

Jon Stead was next to try his luck but he sent a difficult volley over the bar.

Matt Tootle was yellow-carded in the 15th minute, bringing down Biamou as Coventry broke, referee Darren Drysdale playing the advantage, only for the visitors to be flagged offside.

Marc McNulty had been quiet but he almost scored in the 21st minute, breaking into the left channel and firing narrowly over.

Jordan Shipley was next to carve an opening for the visitors and looked certain to score until Tootle made a goal-saving block on the edge of the six-yard box.

Coventry's Michael Doyle was next into the referee's book for a high challenge on Liam Noble, but the free kick came to nothing as Notts struggled to mount meaningful attacks.

Coventry nearly went further ahead when Jorge Grant lost the ball on halfway and the visitors broke into the box, the ball being hacked out for a corner, which came to nothing.

Alessandra was booked in the 31st minute for a foul on Chris Stokes wide left of the 18-yard box but the free kick was dealt with easily.

Coventry went 2-0 ahead in the 37th minute when McNulty scored, confidently converting a low cross into the box from the right.

But Notts were back in the game a minute before half-time as a long Elliott Hewitt throw was blasted home at the far post by Grant.

During four minutes of added time a furious melee erupted, with several players clashing, McNulty and Shaun Brisley both being shown yellow cards when things calmed down.

This proved the final action of a tense first half which ended with Coventry leading 2-1 on the night and 3-2 on aggregate.

Nolan brought on Michael O'Connor for Noble at the interval and he was soon in the action as Notts started at a much faster pace, firing a long-range shot goalwards, before Brisley headed a half-chance wide.

Notts continued to pour forward and Grant showed some trickery on the edge of the box but his low shot was easily saved by Lee Burge, who then came out well to collect a long Collin free kick into the box.

It was Coventry's turn to attack and there was a clash of heads between Biamou and Richard Duffy, the visitors being given a free kick on the edge of the box, which Doyle curled just over the top.

Stead was within inches of drawing Notts level when he worked his way into the box and saw Burge tip his effort just wide. And seconds later Forte headed into the net but the linesman had already raised his flag for offside, though television replays showed he was clearly onside.

Forte was through again as Notts poured forward and was denied by a last-ditch tackle by Dominic Hyam.

But Coventry struck a hammer blow in the 71st minute when Notts failed to clear the ball in their area and Biamou pounced to beat Collin with ease, though again television replays showed a Sky Blues player was offside in the build-up

Soon afterwards two-goal Biamou was replaced by Jonson Clarke-Harris, followed shortly by the arrival of Shola Ameobi for Alessandra as Nolan chased the game in the final 15 minutes.

But the match was all over in the 86th minute when Tom Bayliss broke through and finished emphatically into the bottom corner to make it 4-1 on the night.