Saturday will see Notts County look to take their first step towards Wembley - and promotion - as they face Coventry City at the Ricoh Arena in the first leg of their League Two play-off semi-final.

Last weekend, Notts finished their regular league campaign in front of a big crowd at Meadow Lane with a 0-0 draw against already-promoted Luton Town, a result which saw the Magpies finish in fifth position - one place and two points ahead of their semi-final opponents.

That result was the first time Nolan’s side have failed to find the back of the net since their 1-0 loss at champions Accrington Stanley. Since that defeat, the Magpies have hit 10 in four games.

With more than 2,600 away tickets having already been sold, the Notts faithful are sure to play their part in creating a great atmosphere at the Ricoh Arena.

Coventry go into the first leg in good form, having lost just once in their previous five outings - a 4-2 defeat at home to Lincoln City.

Their last two games of the season saw a 0-0 draw at home to Morecambe and a 6-1 thrashing of Cheltenham at Whaddon Road.

“For me, it’s about making sure I give the lads the right direction to help them do themselves – and all of us – proud.”

"We have just had the experience of a defeat at their place and of course we won the first game of the season here.

"The play-offs are always different though, and it is about how you handle the pressure.

"This is a great experience for everybody. We need to make sure we learn from it and we do all we can to get to Wembley. We are just two games away from that.” 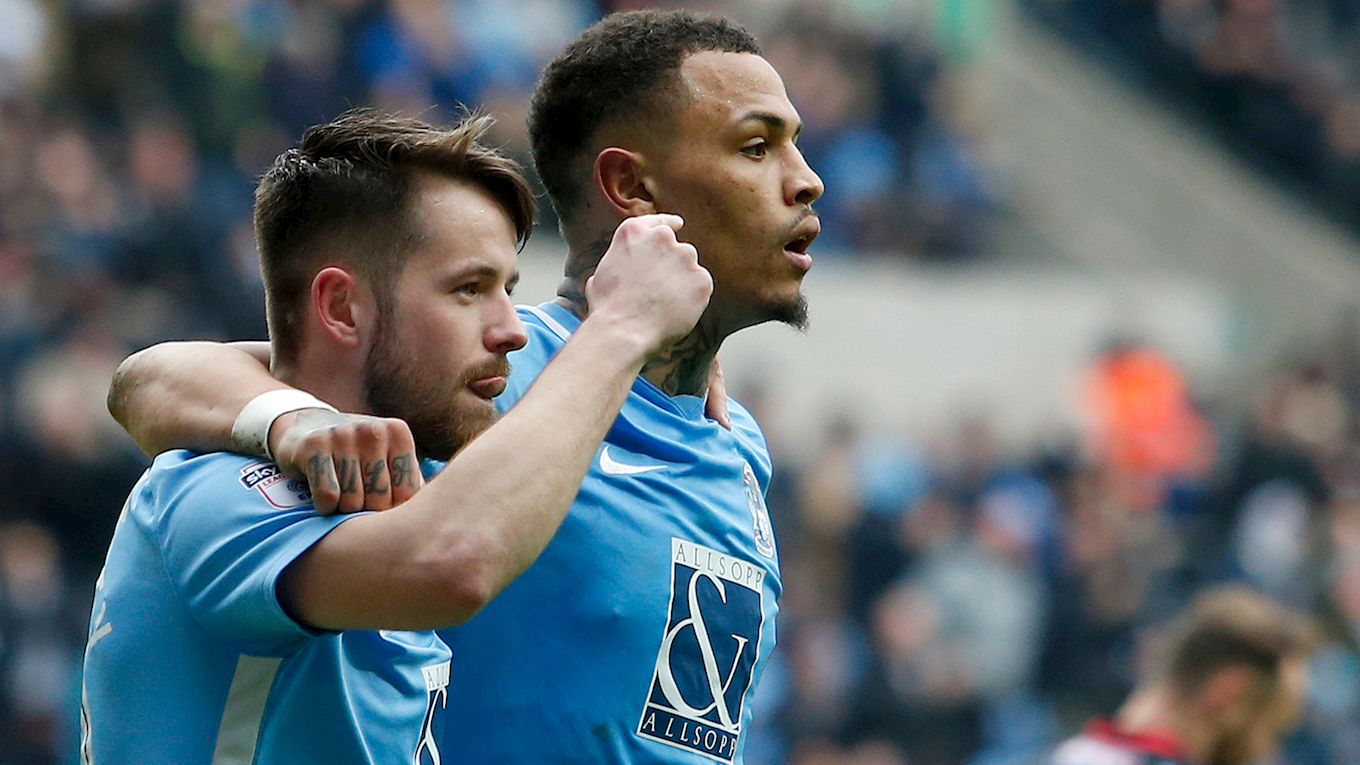 After playing with one up front and a packed midfield in their defeat to Lincoln, Robins has since reverted to a 4-4-2 formation, with improved results.

Kevin Nolan has a fully-fit squad to choose from, with the exception of long-term absentee Mason Bennett.

The two sides last faced each other at the beginning of April at Meadow Lane. Two Jonathan Forte goals, either side of Jordan Ponticelli’s strike for the Sky Blues, saw Nolan’s side avenge an opening-day 3-0 defeat at Coventry.

In their last eight league encounters with the Sky Blues, Notts have won four, drawn two and lost two. Their biggest win in these games came in February 2014, with goals from Hayden Mullins, Jimmy Spencer and Alan Sheehan giving Notts a 3-0 victory.

A wrongly-awarded penalty denied Notts County victory at Coventry City’s Ricoh Arena as Kevin Nolan’s men had to settle for a 1-1 draw in the first leg of their Sky Bet League Two play-off semi-final.

Notts led through Jonathan Forte’s deft second-half finish and looked on course to record a stunning victory before referee Gavin Ward incorrectly adjudged Matt Tootle to have felled Tom Bayliss in the area.

Marc McNulty stroked home the spotkick to send the Sky Blues into next Friday’s Meadow Lane showdown on level terms.

Nolan made two changes to the side that drew with Luton Town on the final day of the regular season.

Notts’ response came from Jorge Grant, who sent an effort over the bar on the half-volley moments before the Magpies suffered a double scare.

Marc McNulty’s low cross-shot struck the far post and Brisley had to be on hand once more to deny Max Biamou on the follow-up.

Notts’ first big chance came on 17 minutes when Forte met Grant’s corner at the near post but could only send the ball over with a header.

That sparked a good spell of pressure for the visitors, who saw Dan Jones fire a yard wide before Forte forced Lee Burge into an incredible save when he managed to turn Jones’ free-kick goalwards. The keeper somehow hooked the ball out for a corner with his feet.

Coventry replied with a near miss of their own, McNulty scampering to the byline and almost squeezing the ball past Collin at the near post.

Stead struck into the side-netting and McNulty blazed high and wide as the clock ticked down towards half-time.

But there was still time for the hosts to spurn an excellent chance to take a lead into the break, Bayliss being played into the area but rolling his shot wide of the far post.

Determined to end the half on a high, Notts pressed through Grant in injury time. The Forest loanee nutmegged an opponent to set himself up for a shot but could only send the ball over, leaving the match goalless at the break.

There were no changes and Notts nearly had the dream start to the second half when Elliott Hewitt sent Burge’s punch looping back over the keeper with a header. A Coventry defender did well to clear the ball off the line.

Coventry countered and nearly took the lead themselves when Grimmer headed over from close range.

But it was to be the Magpies who would draw first blood – and in sensational style.

Jones slid in to win an emphatic challenge down the left before picking out Forte with a low cross. The forward adjusted his feet superbly to flick the ball past Burge in front of Notts’ jubilant supporters.

A wave of Notts pressure followed and Forte came agonisingly close to a second when he tried to scramble the ball home on the goal line, only for Burge to hang on for dear life.

Burge was then equal to a Grant effort which skipped up off the slippery surface as Nolan’s men continued their pursuit of a precious second goal.

Sent on to aid their efforts was Lewis Alessandra, replacing Matty Virtue down the right.

But, buoyed by a 17,000-strong crowd, Coventry upped their search for an equaliser when Bayliss fired narrowly wide and McNulty went close with a deflected header.

Sent on to steady the ship was Michael O’Connor, replacing Noble and taking the captain’s armband from Duffy.

But there was nothing the skipper could do to prevent the hosts from being awarded a highly contentious penalty when Tootle was adjudged (incorrectly, according to television replays) to have felled Bayliss in the box.

McNulty made no mistake with the spotkick, levelling the tie with only three minutes of normal time to play.

The tension and frustration was palpable and O’Connor joined team-mates Grant (74’) and Duffy (86’) in the book for a rash challenge shortly before six minutes of added time were indicated.

A couple of nervy moments followed as the hosts nudged two efforts narrowly wide before Forte hobbled off to be replaced by Alan Smith.

But 1-1 was how it stayed, setting up a tantalising second leg at Meadow Lane next Friday.

Tickets for Notts County's away play-off semi-final against Coventry City will be available from cash turnstiles at the Ricoh Arena.

No further tickets will be available from Meadow Lane.

Official away travel will depart from outside the club shop on Meadow Lane at 4.30pm. Prices are as follows:

Notts are offering generous discounts on 2017-18 PUMA home shirts ahead of the play-offs, with adult prices slashed to £25.

Stock is becoming limited so click here to get yours ASAP.

The club shop and ticket office are open from 9am - 4pm on Saturday and 10am - 4pm on Sunday.