The Buckinghamshire side extended the gap between themselves and the Magpies to four points last weekend with a goalless draw against Port Vale and arrive at Meadow Lane with the best away form in the division.

But Notts have the third-best home record and are unbeaten in their last four games on their own turf so will fancy their chances of tighening the race for automatic promotion ahead of the trip to second-placed Accrington Stanley on Easter Monday. 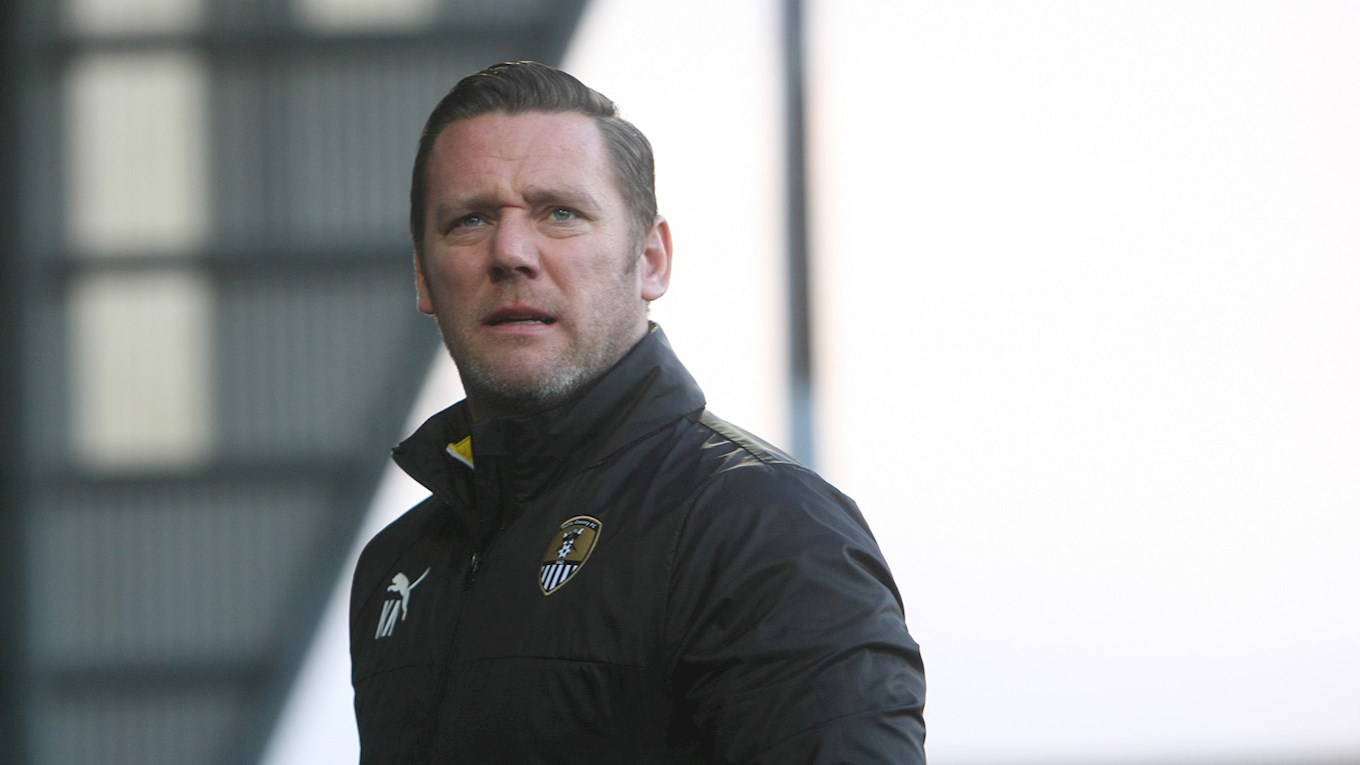 "Wycombe do all the nasty things really well and you have to match them because if you don't, you're found wanting.

"That's why they are where they are. They've played some good stuff and are the best side in the league away from home - the stats prove it - so so we won't be underestimating them." 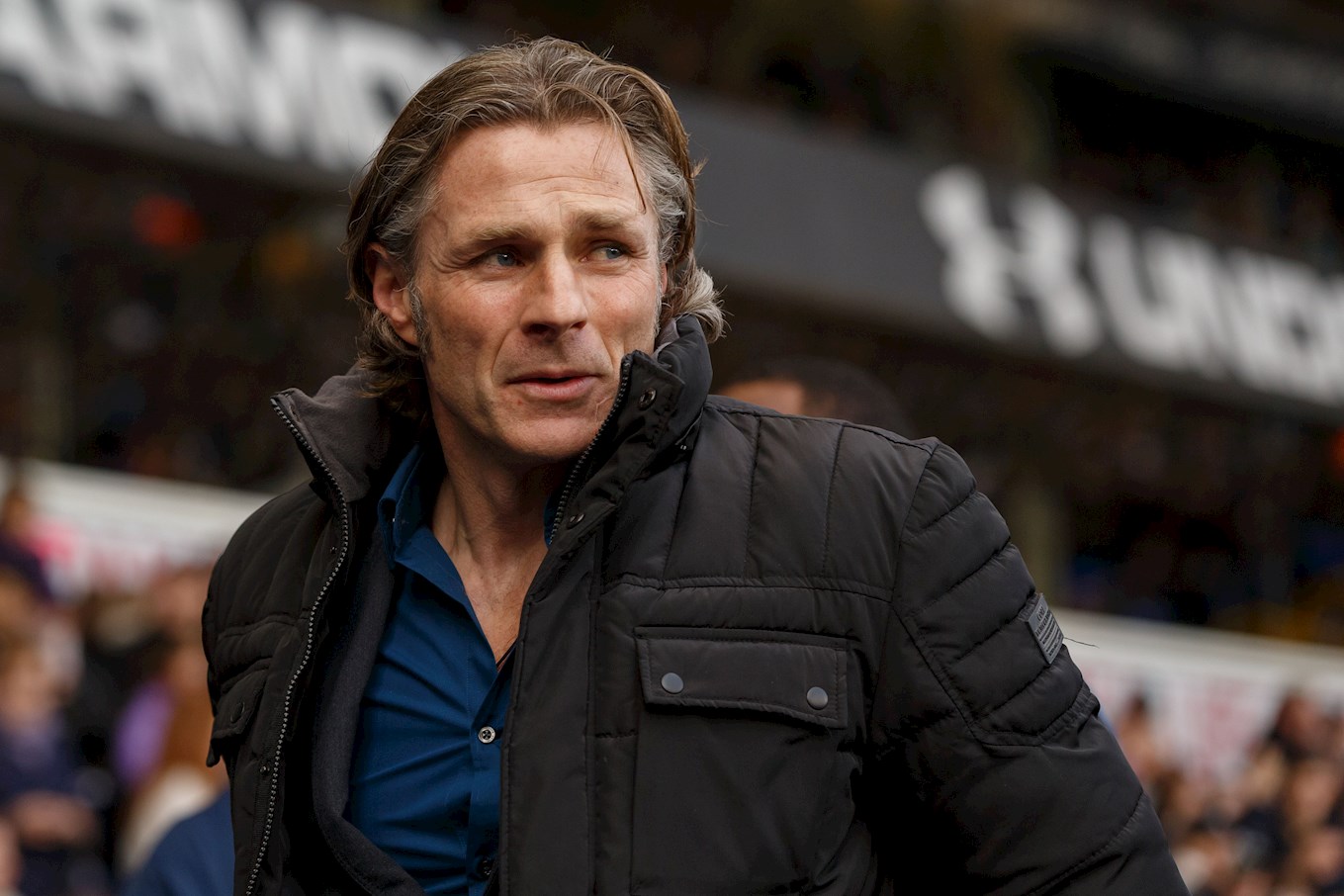 “The players don’t need any encouragement to get up for these games.

“They know how much it means. They look at the league table and know what a crucial time of the season it is.

“Whatever happens we are going to be third on Easter Monday, which is fabulous. It's in our hands.

"We want to make sure we give a good account of ourselves at Meadow Lane. They rolled us over earlier in the season and we want to show them how far we have come.” 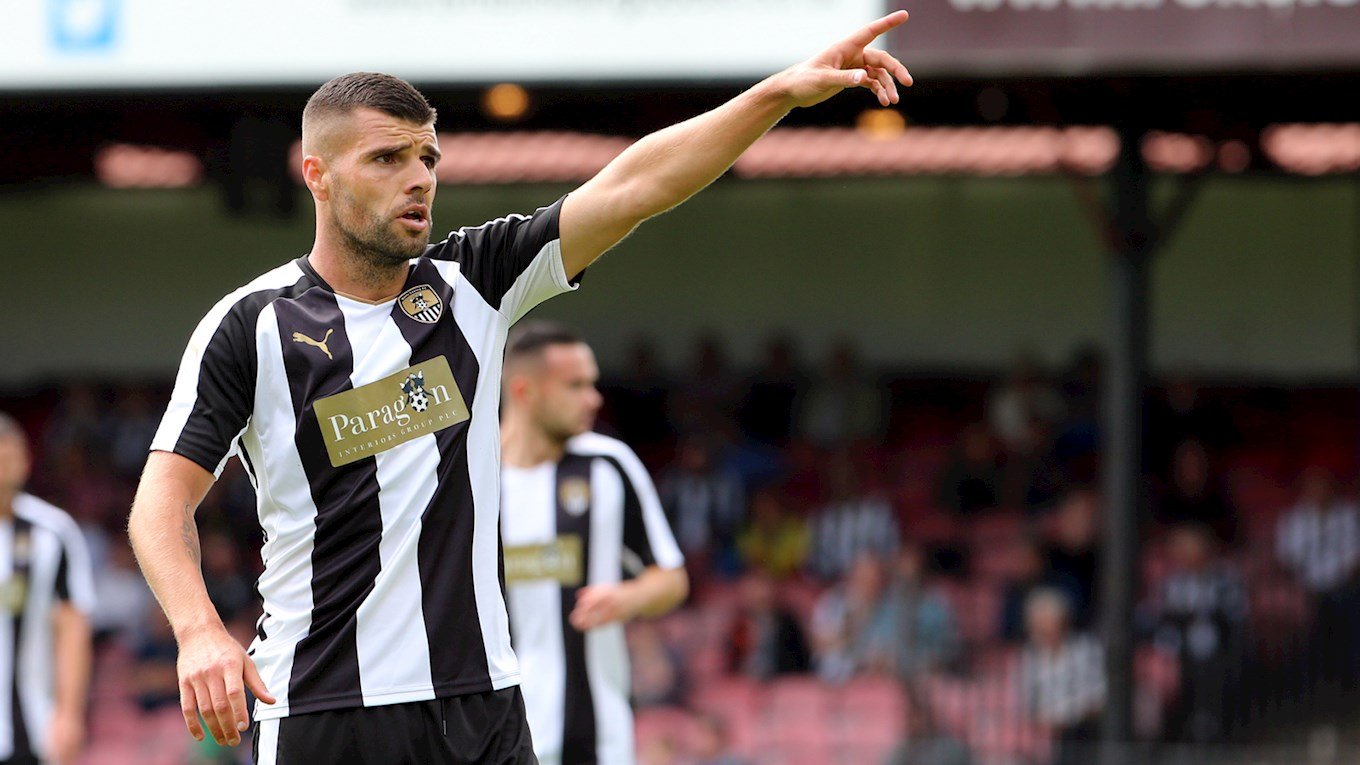 Notts welcome back defender Ben Hall and midfielder Liam Walker, who missed last weekend's 3-1 defeat at Chesterfield as they were both away on international duty with Northern Ireland and Gibraltar respectively.

Midfielder Michael O'Connor could return to the first-team fold almost a year on from suffering a ruptured anterior cruciate ligament in his right knee.

Wycombe will hope to be able to call upon the services of midfielder Luke O'Nien, who sat out the goalless draw against Port Vale last Saturday with an injury, while Middlesbrough loanee Nathan McGinley is expected to recover from illness to be available.

Defender Dan Scarr will miss out with an ankle problem with fellow centre half Anthony Stewart and midfielder Sam Saunders also unlikely to play a part at Meadow Lane. 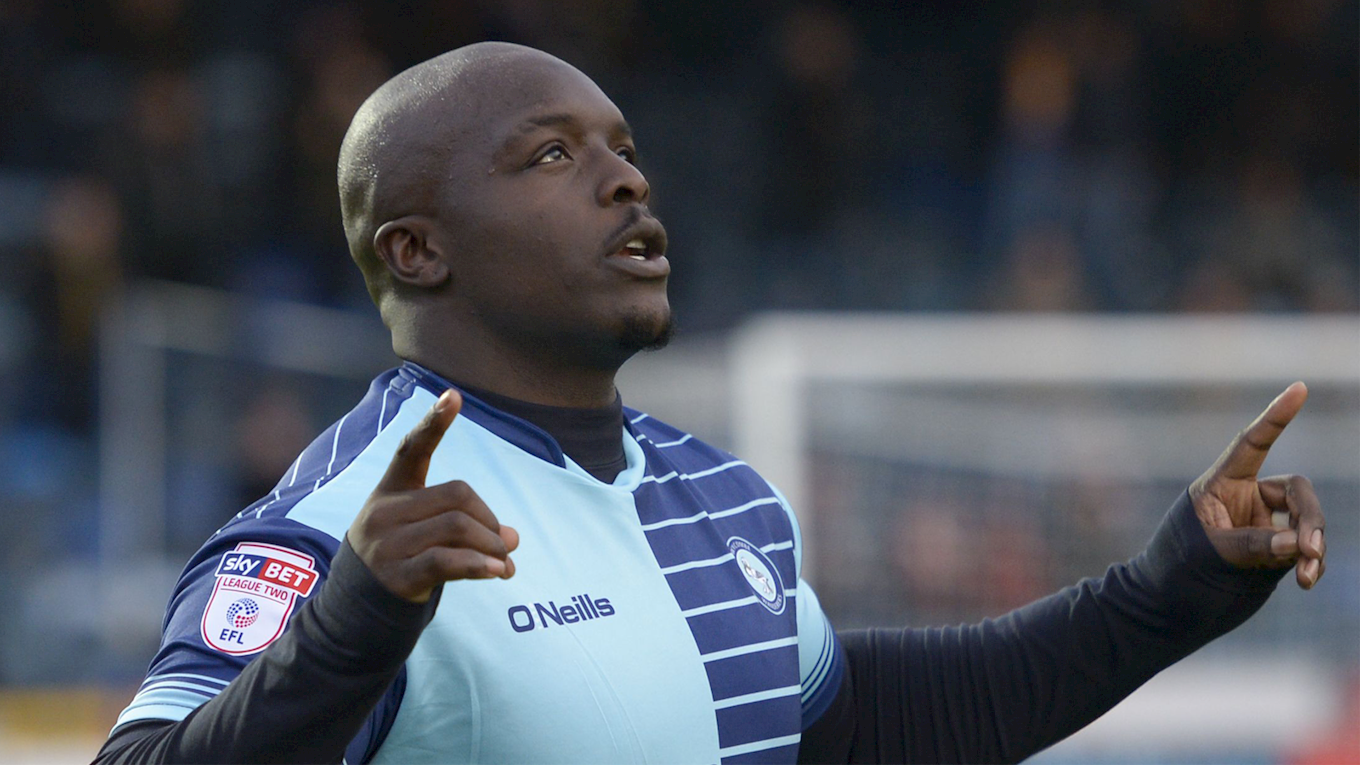 The number 13 may be unlucky for some but you won't find Adebayo Akifenwa buying into that.

Wycombe are the 13th club the striker has represented during a nomadic career but, at 35 years old, he is now arguably playing his best football for Gareth Ainsworth's side.

A goal against Crawley last week saw the striker equal his 18-goal tally from last season in 12 games fewer and one more would represent a career-best haul for the larger-than-life Akinfenwa.

The veteran has enjoyed promotion from this level before, scoring the penalty in the play-off final for AFC Wimbledon against Plymouth which sealed a 2-0 victory and, given the Chairboys' position in the Sky Bet League Two table, will no doubt have another on his agenda this season.

Notts have won the two previous meetings between the sides, both of which have come at Adams Park to extend the run of games without a home win in this fixture to 10.

Shola Ameobi scored the only goal of the game in March 2017 before Notts came out 4-2 winners in Buckinghamshire in the early weeks of the 2017-18 campaign.

Richard Duffy's header set the Magpies on their way before Luke O'Nien's own goal doubled the lead going into half-time but the Chairboys hit back and drew level in the second half through strikes from Nick Freeman and Joe Jacobson.

However, there was late delight for the travelling black and white army as Jonathan Forte and Lewis Alessandra both came off the bench to score and seal all three points.

Wycombe's away form has seen them installed as 13/10 favourites for victory at Meadow Lane while Notts are 21/10 for the win. The draw is 23/10.

Defender Richard Duffy was the first name on the scoresheet when the sides met in August and the Welshman is 33/1 to open the scoring against the Chairboys this time around.

Shola Ameobi was the matchwinner against Ainsworth's side a year ago and is 13/2 to score the first goal of the game. A 1-0 win with Ameobi scoring the only goal is 35/1 in the scorecast market.

Notts are 5/1 to win with both teams scoring in the game or 9/2 to win and keep a clean sheet. 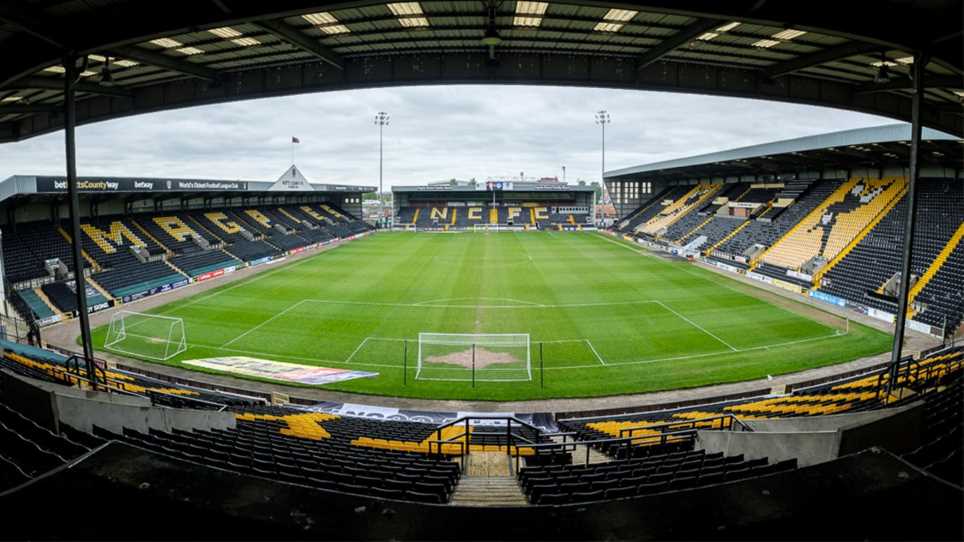 
Notts County's home game against Wycombe Wanderers has been brought forward by 24 hours to Good Friday.

The Magpies hit the post either side of the break but were unable to find a goal to narrow the gap between themselves and the third-placed Chairboys.

Kevin Nolan made two changes to the side that faced Chesterfield on Sunday.

Dan Jones, who scored a free-kick that day, replaced Carl Dickinson, while Jorge Grant made way for Lewis Alessandra.

Terry Hawkridge claimed the game's first notable opportunity, skidding the ball low along the damp surface and drawing a strong save from goalkeeper Scott Brown.

Notts went even closer seven minutes later when Shola Ameobi prodded the ball against the post after latching on to Hawkridge's cross.

Adebayo Akinfenwa fired wide from inside the area before Joe Jacobson and Nathan Tyson entered the referee's notebook for fouls as heavy rain came down.

Notts had penalty appeals waved away as the half neared its conclusion, Ameobi going down under the challenge of Adam El-Abd.

The referee was unmoved, however, and sent Nolan to the stands for his protestations.

Wycombe were forced into a first-half change when Tafari Moore limped off with a hamstring injury and was replaced by Michael Harriman.

And Notts nearly took the lead a minute later when the ball dropped nicely for Matt Tootle in the area. His fierce shot, bound for the top corner, was excellently saved by Brown.

There were no half-time changes for either side and the rain continued to fall as the two promotion contenders locked horns once more.

Chairboys keeper Brown was booked for timewasting before Hawkridge had his name taken for a foul in the centre circle.

Substitute Harriman fired an effort over and Wycombe saw a goal ruled out for offside before Hawkridge made way for Grant shortly after the hour.

Shaun Brisley was the next man into the book, seeing yellow shortly after Matt Bloomfield and Sido Jombati had both sent efforts off-target for the visitors.

Akinfenwa had been kept relatively quiet until the 79th minute, when he forced Collin into an excellent low save moments before rolling an effort wide of the near post.

But it was Notts who would come closest in a cagey second half, Hewitt heading the ball against the post after leaping well to meet Jon Stead's cross. The midfielder could only turn the ball wide on the rebound.

It was looking increasingly likely that the game would end goalless, Liam Noble seeing yellow before Akinfenwa sent another effort wide.

The fourth official indicated there would be six minutes of added time, during which Ameobi and El-Abd were booked following an altercation.

But neither side were able to find the breakthrough as the spoils were shared at a soggy Meadow Lane.


Notts County's home game against Wycombe Wanderers has been brought forward by 24 hours to Good Friday.