The Magpies leapfrogged Wycombe to move into the top three with a 1-1 draw at Cheltenham Town on Tuesday night and make another trip to Gloucestershire looking to move clear of the chasing pack, which consists of Wycombe, Mansfield, Exeter and Swindon.

With their last win away from home coming on Boxing Day, County chief Kevin Nolan knows he must find a cure for Notts' travel woes if they are to have any hopes of maintaining their place in the top three.

The hosts, meanwhile, have enjoyed a rich vein of form on their own turf, winning their past five games at The New Lawn which has helped them to move seven points clear of the relegation zone.

They look set to retain their EFL status in their first season at this level after winning promotion from the National League in 2016-17 and will be sure to give Notts another stern test of their promotion credentials. 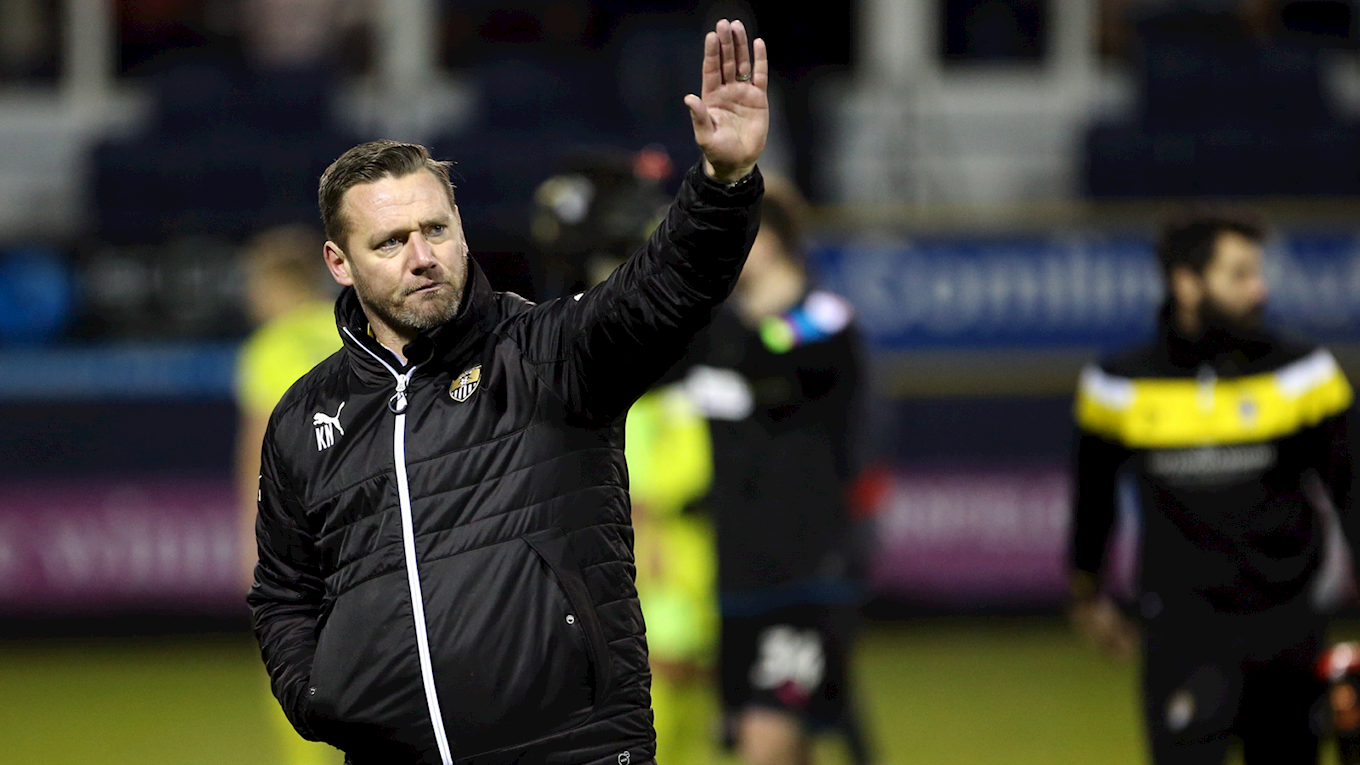 "Forest Green have been fantastic at home since the turn of the year and can beat anyone on their day.

"We're well aware that we have to go there, respect them and earn a result.

"They are a strong side and play good football with two fantastic strikers in Christian Doidge and Reuben Reid so it won't be an easy one." 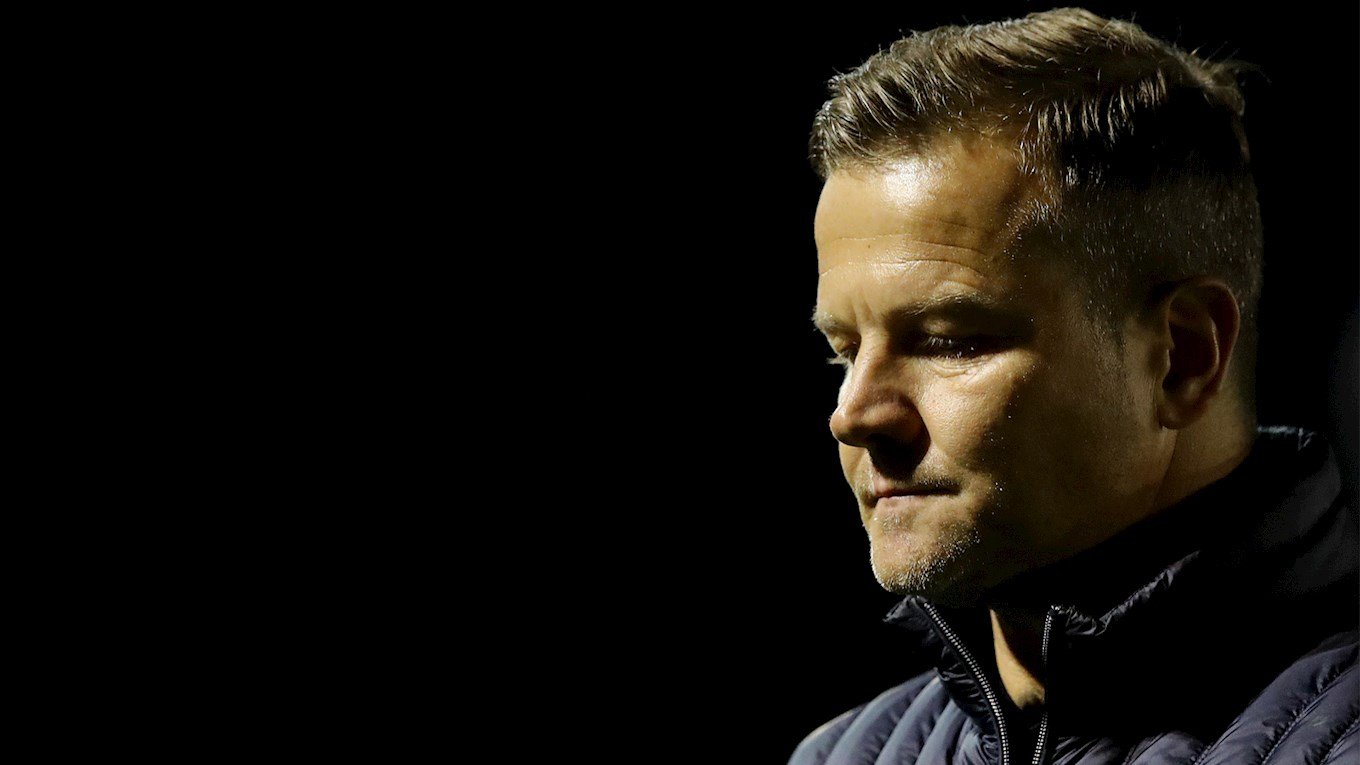 They've got two focal points up front in Jon Stead and Shola Ameobi who both are and have been tremendous centre forwards.

"If you've got those two players in your team then you need to use them and Notts County certainly do., They've scored an awful lot of goals from crosses and play to their strengths and we're going to have to be really on our guard.

"It's a lovely club, good people, big fan base, brilliant stadium but it all comes down to 11 v 11 on the pitch on Saturday and that's how coldly and calmly you have got to look at it." 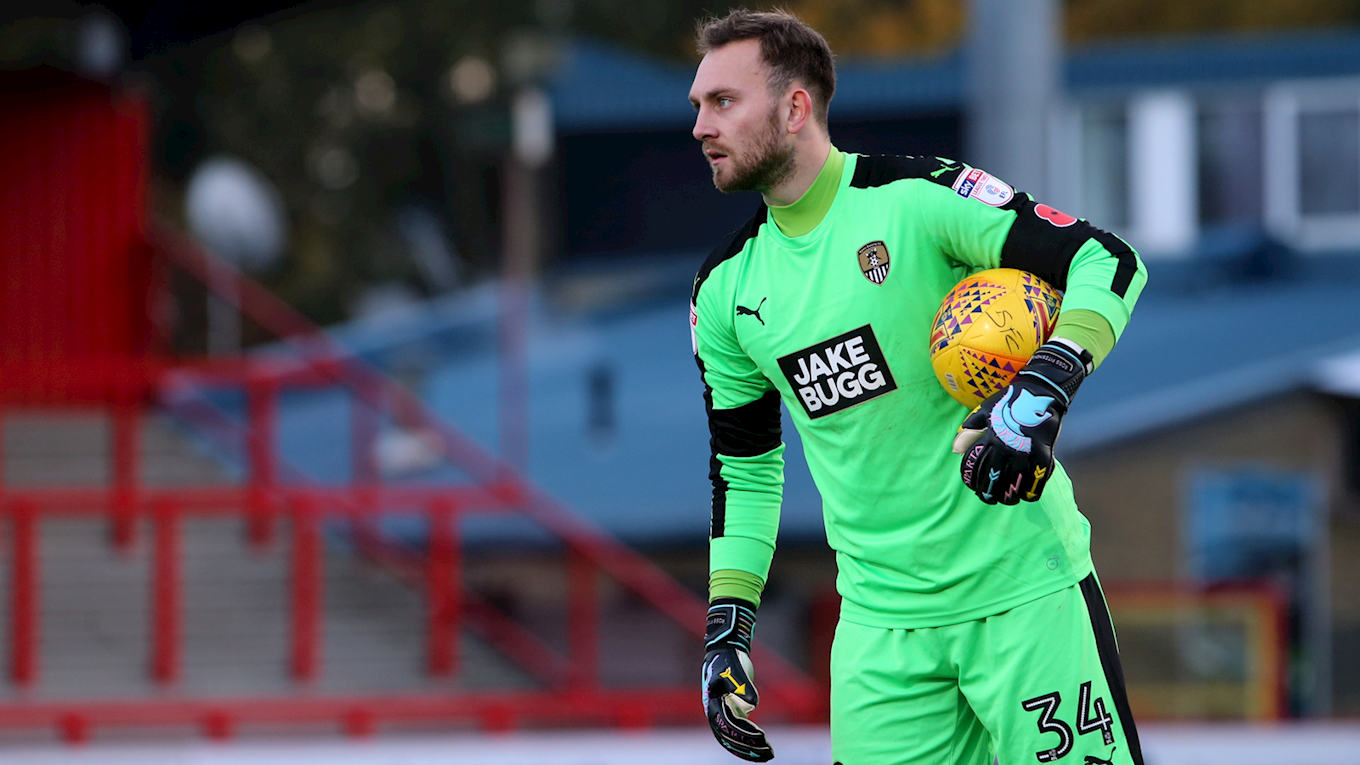 Goalkeeper Ross Fitzsimons will miss the trip as he goes through the protocol for a head injury following his road traffic accident on Monday morning.

Nolan has an otherwise fully-fit squad to choose from, with captain Michael O'Connor participating in a behind-closed-doors friendly to continue his comeback from the serious knee injury sustained last April earlier in the week.

Former Notts defender Haydn Hollis could line-up for Forest Green after moving to The New Lawn in January.

However, top goalscorer Christian Doidge limped out of Tuesday's 3-3 draw at Newport and will be monitored in the build-up to the game. 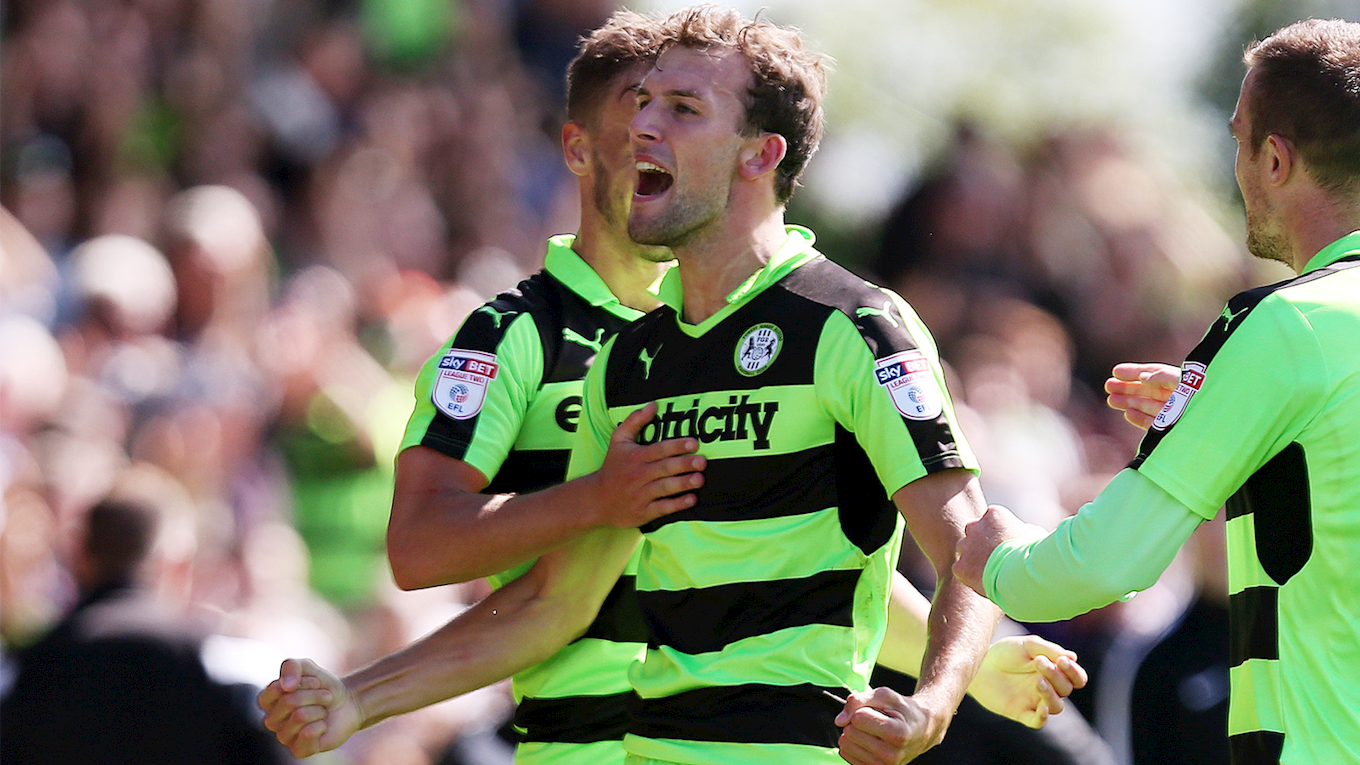 A former basketball player who represented Wales in the European Championships after his release from Bristol Rovers at the age of 15, Doidge must be glad he returned to football.

The striker, a free transfer from Dagenham and Redbridge in the summer of 2016, found a hitherto unknown scoring prowess for Forest Green, bagging 27 goals in 43 league outings - including one in the play-off final at Wembley - to fire Rovers to promotion.

He has continued his fine form in this campaign, averaging a goal every other game with 21 in 42 appearances and sits third in the Sky Bet League Two top goalscorers list.

This will be just the third meeting between the sides and Notts' first visit to The New Lawn.

Both previous matches came at Meadow Lane with the Magpies winning a third-round tie in the FA Cup in January 2010.thanks to goals from Stephen Hunt and Lee Hughes.

The last meeting saw Rob Milsom's last-minute equaliser snatch a point for Notts after Omar Bugiel opened the scoring for the visitors.

Sky Bet have priced Notts up as 13/10 odds-against favourites to come away from the LCI Rail Stadium while the hosts are 2/1 to emerge victorious with the draw available at 23/10.

Notts' last win on the road was a 4-1 success at Morecambe on Boxing Day and another victory by the same scoreline is a huge 50/1 this weekend. 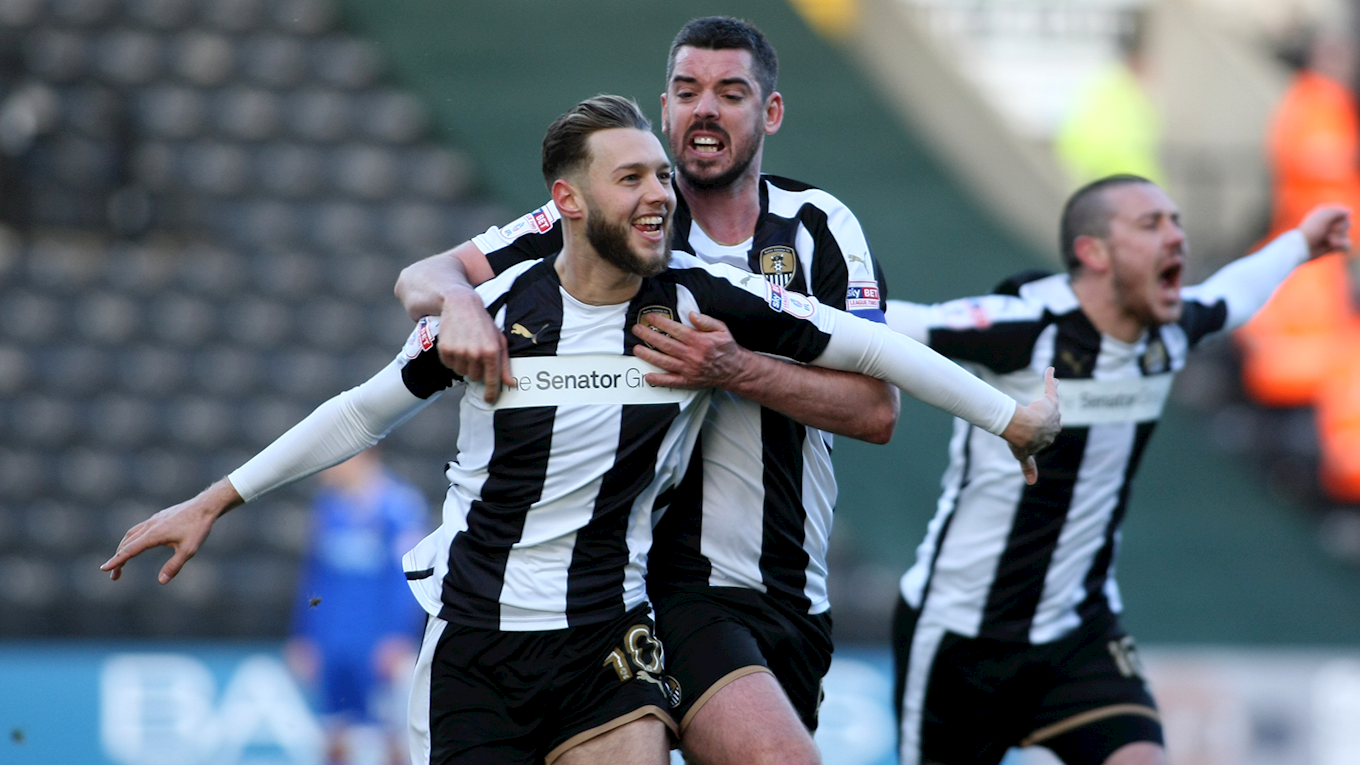 Jorge Grant's goal against Stevenage a fortnight ago took him to within two goals of 20 for the season. The midfielder is 8/1 to score a brace on Saturday to hit that milestone.

Meanwhile, Liam Noble is 9/1 to be the first name on the scoresheet against his former club and Terry Hawkridge is 12/1 to open the scoring, as he did on Tuesday night at Cheltenham Town.

Liam Noble marked his return to his former club with a goal in a first half dominated by the visitors.

Tahvon Campbell levelled things up for Rovers after the break but Matt Tootle was on hand to lash home the winner to send 700 travelling Magpies home happy.

Kevin Nolan made two changes to the team that drew at Cheltenham in midweek.

Shola Ameobi and Noor Husin were replaced by Lewis Alessandra and Noble as the Magpies continued with a 4-4-2 formation.

And the visitors nearly had the dream start when, within the opening two minutes, Alessandra nodded Matt Tootle's clipped pass down in the area. Elliott Hewitt latched on to it and saw his shot deflect across goal and just wide of the post.

Grant took the subsequent corner short, picking out Noble who saw his curling effort diverted out for a throw in.

Notts were making all the early running and created another good opportunity on 19 minutes with a purposeful counter attack. Noble, Alessandra and Grant were all involved and the the move ended with the latter seeing his low near-post shot inadvertantly blocked by Jon Stead.

But it was opposition keeper Dale Bennett who would be the first to pick the ball out of his own net as the Magpies capitalised on Rovers' insistance of passing the ball out from the back.

Stead dispossed a defender on the edge of FGR's area and Notts worked the ball to Alessandra, who was felled as he rounded the keeper. A penalty looked a certainty but it wasn't required as Noble was on hand to turn the ball into an empty net.

Alessandra found the side-netting with a shot from a narrow angle and Stead curled a left-footed effort wide as the Magpies pressed for a second.

But 1-0 was how it stayed going into the interval.

Collin got down low to tip Chris Clements' long-range effort out for a corner as Mark Cooper's men looked for a fast start to the second period.

Their momentum was halted by a blood injury to Ben Hall, who required lengthy treatment before the corner was swung in. Gavin Gunning headed the ball over and Hall returned to the fray in a clean shirt.

Hewitt blocked a Dayle Grubb effort on the edge of the area as the home side continued with purpose.

Chances were proving few and far between for the Magpies in the second half but they had an opportunity on 67 minutes when Hawkridge drifted the ball into the Rovers area and their defence failed to properly clear. The ball dropped for Grant, who looped it over the bar with a delicate effort.

Notts first change followed shortly afterwards as Hawkridge was replaced by Matty Virtue in a move which saw Alessandra move to right wing and Stead adopt the role of lone striker.

Seconds after play resumed, former Notts loanee Campbell - who replaced Grubb earlier in the half - was sent racing into the Magpies' area. He composed himself before blasting the ball into the roof of the net from a narrow angle, giving Collin no chance.

And Campbell came so close to doubling the lead minutes later when Notts were caught cold once more, Reid releasing Campbell down the right this time.The West Bromwich Albion loanee decided to take his shot early, rattling the crossbar from 20 yards. The ball crashed down on to Collin, on the ground after attempting to make the save, and thankfully stopped in its tracks rather than rolling over the line.

Notts had penalty appeals waved away when Stead went down after appearing to have his arm pulled back as he ran the ball into the area.

But their frustrations were short-lived as, with 10 minutes to go, Tootle fired the Magpies back in front. Alessandra picked the full back out on the edge of the area and Tootle knocked the ball out of his feet before lashing a shot across goal which Collins couldn't keep out despite getting a hand to it.

Two minutes later, Virtue had a golden opportunity to make it three. Grant led a pacey counter down the left and picked out the Liverpool loanee with an inch-perfect pass. Virtue side-footed the ball goalwards first time but couldn't beat Collins in the Rovers net.

Inbetween the substitutions, Rovers captain Lee Collins was booked following an incident which left Noble holding his head, and shortly after them Richard Duffy was booked for timewasting.

Noble suffered the same fate for a similar offence as the clock ticked down towards 90.

Seven minutes were added on at the end of the match, bringing plenty of toing and froing at both ends of the field.

But Notts held firm to claim three big points in their pursuit of promotion.

Tickets for Notts County's trip to Forest Green Rovers on Saturday 10 March must be purchased in advance.

This fixture is strictly ALL-TICKET for Notts supporters with only uncovered terrace tickets available. No tickets will be available to buy on the day.

Supporters wishing to purchase in advance who are unable to get to Meadow Lane to collect their ticket will be able to purchase over the phone and collect on the day from Forest Green.

Availability permitting, tickets will remain on sale at the Notts County club shop until 4pm on Friday 9 March.

Notts have been allocated 967 uncovered terrace tickets located along the side of the pitch in the West Stand. Supporters should be aware that the West Stand is an uncovered area and fully open to the elements.

There are no general seating tickets available to away supporters other than to ambulant/wheelchair disabled or elderly fans, which has sold out.

*Only available when purchased along with an adult/senior match ticket. Not available online.