Kevin Nolan's side have won their last two outings and are now sitting in fifth place, six points ahead of eighth place Mansfield Town.

And, if they better their East Midlands rivals' result this weekend, they will secure a place in the play-offs.

Yeovil's last win in League Two was on Easter Monday, when they travelled to the Midlands and thumped County's fellow play-off hopefuls Coventry City 6-2.

Since that victory, however, the Glovers have only picked up one point in their last four games - a 2-2 draw away to Swindon Town. 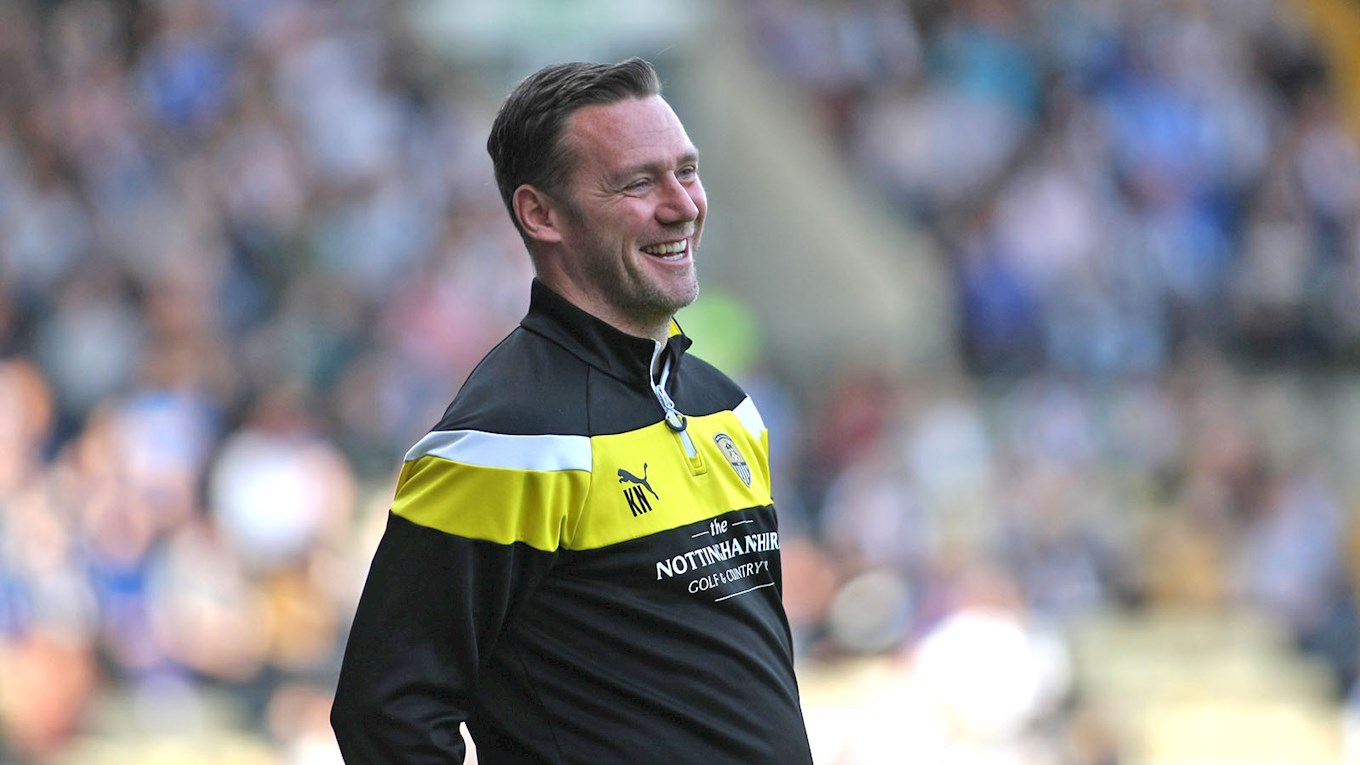 "We look forward to what is going to be another good game - and hopefully a winning one.

"They're a professional side but I'm sure they’ll enjoy it with the shackles off."

"You want to officially get the job done (avoid relegation) as both a manager and a team.

"We don't want to be looking over our shoulder."

There are no fresh injury concerns for either side.

However, former Magpie Francois Zoko will serve the last of his four-match suspension against his former employers and will be joined on the sideline by the injured Artur Krysiak, Dan Alfei, James Bailey (all knee), Jake Gray (ankle) and Sam Surridge (hamstring).

Defender Nathan Smith travelled to the Glovers' match at Accrington on Tuesday and could return to the matchday 18 after a lengthy absence with a knee injury. 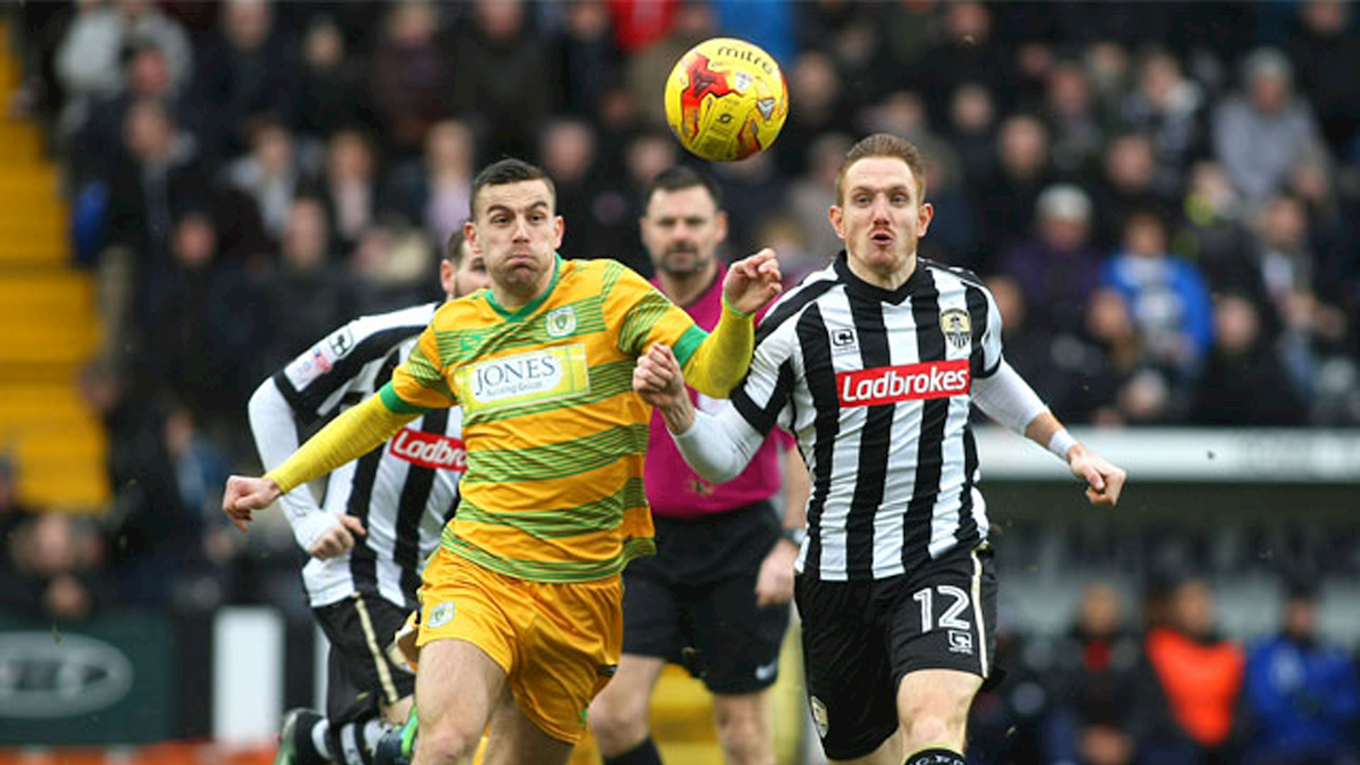 You have to back to November 2014 for Yeovil's last win at the Lane. This was in League One, when they ran out 2-0 winners, with both sides being relegated to League Two at the end of the season.

When the two sides met earlier this season, the game ended 1-1 with Yeovil being reduced to 10men in the 88th minute. Jonathan Forte put the Magpies ahead just before the break before Zoko levelled from the penalty spot.

But with Wycombe losing 4-0 at home to Accrington, and Exeter only drawing with Crawley, Notts are still in with a huge chance of grabbing the third automatic promotion slot.

Fifth-placed Notts now trail third-placed Wycombe by two points and are just a point behind Exeter, with all three teams having two games to play in what has turned into a thrilling climax to the season.

Manager Kevin Nolan made two changes from the side which won at Colchester last weekend, Lewis Alessandra replacing the injured Jorge Grant and Nicky Hunt coming in at right back for Matt Tootle, who was ill.

Notts took the early initiative and won a corner after four minutes, but Liam Noble's flag kick was easily cleared.

The next attack was much more potent, Jonathan Forte controlling an Adam Collin clearance and driving left before firing just wide of John Maddison's left-hand post.
Yeovil came more into the game and there were claims for a penalty when Onwar Sowunmi was sandwiched in the box by Richard Duffy and Shaun Brisley, but referee Anthony Backhouse waved away appeals.

Collin was called on to make a routine save from a long-range shot by Lewis Wing before Notts had a massive let-off. A deep cross found Alex Fisher unmarked on the six-yard box in the centre of goal but he could only head wide.

Yeovil threatened again, Shaun Donnellan fizzing a low cross across the face of goal, but it was Notts who went closest to opening the scoring in the 18th minute.

Forte battled his way into the box and lobbed the advancing Maddison, only to see the ball bounce back into play off the bar and be cleared. In the next attack Matty Virtue found himself with the ball in the six-yard box but his shot on the turn was blocked.

Notts' momentum was halted by two lengthy delays for head injuries, the first to Yeovil's Donnellan but the second involving Brisley, who was fit to continue after treatment.

The Magpies continued to enjoy the majority of possession but Yeovil looked dangerous on the break, though they failed to make anything of several good positions.

The first booking came in the 30th minute, Yeovil's Oscar Gobern seeing yellow for a rash tackle from behind on Shola Ameobi.

As half-time approached, Yeovil came close to scoring as Fisher was once again first to a cross but again he headed wide.

But just after seven minutes of added time had been announced, Notts took the lead in spectacular style. Dan Jones had seen his free kick on the edge of the D deflected for a corner, which came to nothing, but from the Magpies' next attack down the right the ball fell for Jones 30 yards from goal and his powerful left-foot shot took a deflection on its way past a helpless Maddison into the roof of the net.

Notts almost went in two ahead when more good work down the right by Virtue and Hunt resulted in a cross which Forte headed just wide.

After the interval Yeovil went on the attack but Gobern was wasteful with a shot from distance which went well over the bar.

The play became scrappy between both teams and fittingly it resulted in the most amazing own goal the 7,359 in attendance will have witnessed for many years.

Liam Noble's pacey pass from the right in the 54th minute seemed to pose little danger, with no home player close to it, but inexplicably Tom James, facing his own goal, miscued a hurried clearance, succeeding only in smashing the ball past a helpless Maddison from fully 20 yards.

That was the cue for Yeovil changes, with Donnellan, Gobern and Ryan Dickson repaced by Jordan Green, Rhys Browne and Nathan Smith respectively, and shortly afterwards Nolan replaced the excellent Ameobi with Jon Stead.

And in the 70th minute the points were secured when Elliott Hewitt collected the ball on the left of the box and weaved his way towards goal before firing low past Maddison.

Notts were now rampant, and after Virtue was booked for blocking a Maddison clearance, Allessandra made it 4-0. He owed a lot to Forte, whose pace had the Yeovil defence backtracking before he picked out Allessandra in the box, and he showed neat footwork to cut inside and score with a firm, low shot.

Hewitt made way for skipper Michael O'Connor and Noor Husin replaced Noble, before Stead just failed to make contact with a cross to the far post to make it five.

The action was not over, with Yeovil grabbing a goal back in added time through Fisher, then O'Connor going close to putting the icing on the cake of a superb performance.