Notts County host Coventry City in a battle between two of the play-off pack in Sky Bet League Two.

Both sides lost ground on those above them over the Easter weekend, taking one point from two games and, with so few matches remaining and the table being so tight, three points would be priceless for the winners while a draw would do neither any favours in their bid for a top-seven finish.

Coventry were uncharacteristically thumped 6-2 at home by Yeovil on Monday, denting their strong defensive record, which still remains the best in the division despite that result.

The Sky Blues are unbeaten in their last four games away from the Ricoh Arena and sit in the final play-off place, just two points above Mansfield Town.

But their record at Meadow Lane is poor so Kevin Nolan's Magpies will be hoping to continue their strong home record and boost their own hopes of making the post-season tournament.

"You have to expect a reaction from them after the result they had on Monday.

"But I want a reaction from my players after losing at Accrington on Monday and not winning our last home game."

"Going into this game against Notts County I am looking for a reaction.

"This couldn’t be a better game to follow for me. We have already played and beaten County on the opening day of the season.

"They have some talented players and really good staff. This is a huge occasion and we know that as we are taking so many fans." 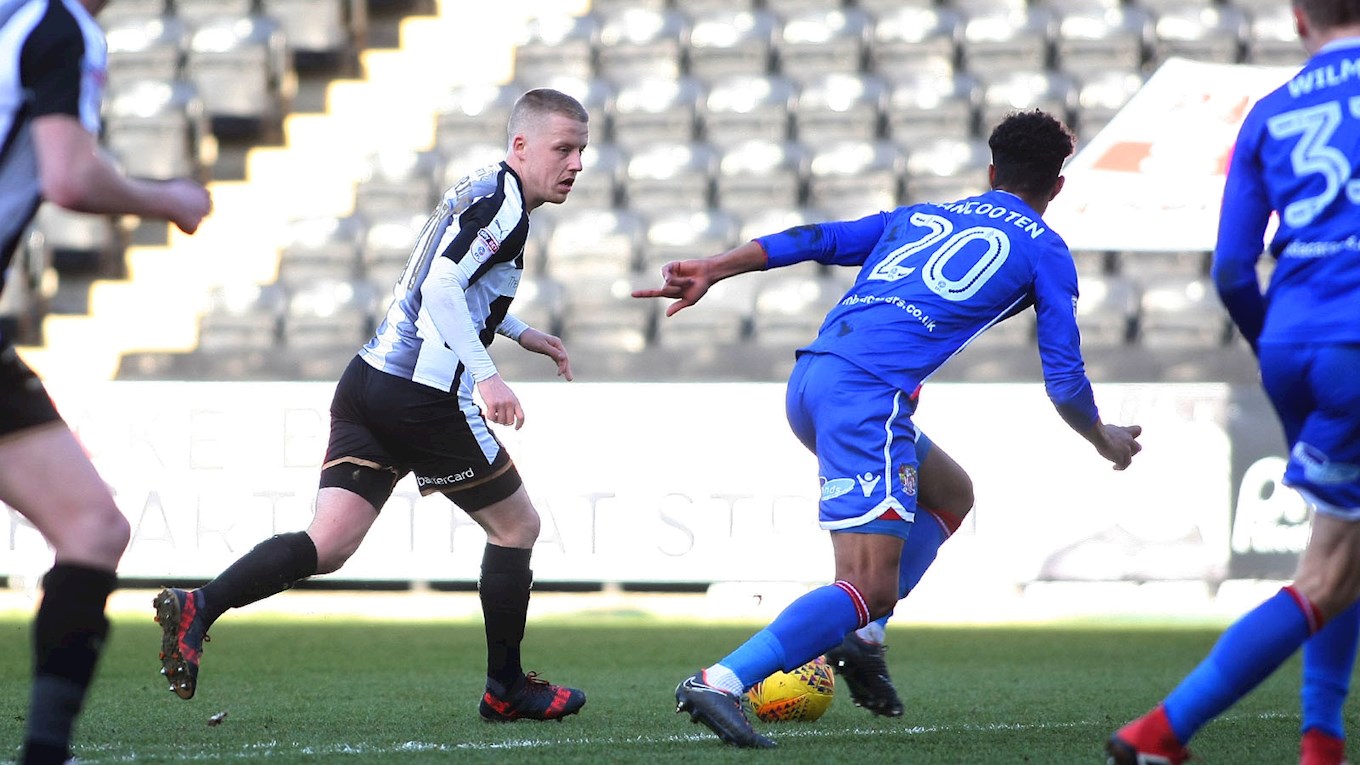 Notts are boosted by the return of winger Terry Hawkridge, who missed the defeat at Accrington on Easter Monday with a minor niggle.

Midfielder Michael O'Connor made his long-awaited return to action almost a year after suffering a serious knee injury and the Northern Irishman is in contention again after coming through unscathed.

Coventry are waiting on the fitness of goalkeepers Lee Burge and Liam O'Brien, who have both been suffering with minor injuries this week.

Midfielder Carl Baker, meanwhile, continues his recovery from a long-term injury and Jodi Jones, scorer of a hat-trick when the sides met on the opening day of the season, remains sidelined. 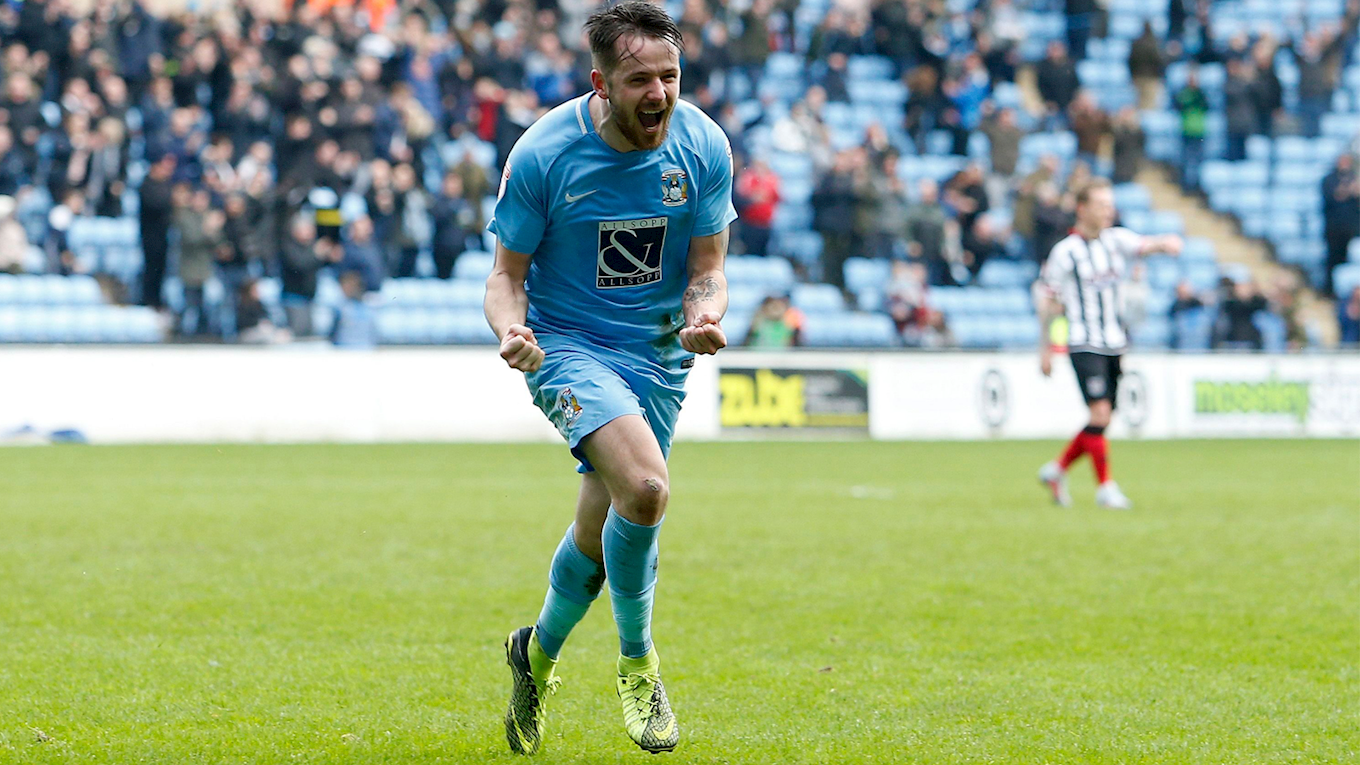 Beginning his career in Scotland, Marc McNulty scored an impressive 46 goals in just 96 appearances for Livingston during a five-year spell at the club, earning him a move to England with Sheffield United.

The striker spent the 2015-16 campaign on loan at Portsmouth, scoring ten goals, and most recently had a spell at Bradford City before agreeing a two-year contract with the Sky Blues after leaving Bramall Lane.

A hat-trick against Grimsby Town a fortnight ago took the frontman past the 20-goal mark for the season, making this his best-ever scoring tally of his career thus far.

Notts have an excellent home record against Coventry having lost just two of the past 18 meetings between the sides at Meadow Lane, the most recent defeat coming in August 1963.

The West Midlands side did get the better of County on the opening day, however, as Jodi Jones' hat-trick secured a 3-0 win for Mark Robins' men.

Notts' last home win against City came in February 2014 when goals from Hayden Mullins, Jimmy Spencer and Alan Sheehan gave Shaun Derry's team a priceless three points in their bid to avoid the drop from Sky Bet League One.

Sky Bet have priced Notts as 13/8 favourites to claim all three points while the visitors are a 9/5 shot for a first successful visit to Meadow Lane in 55 years. The draw is 21/10.

Jon Stead is one goal away from matching his tally for the last two campaigns and can be backed at 5/1 to open the scoring against the Sky Blues this weekend.

Terry Harkwidge, meanwhile, is 12/1 to find the net first and continue his improved run of form in front of goal in recent weeks.

Notts are 9/2 to win with both teams scoring in the game or 3/1 to win and keep a clean sheet.

Jonathan Forte was the hero at Meadow Lane, scoring twice as Notts County ground out a 2-1 win over Coventry City.

In a tightly-contested affair, it took a set-piece for the Magpies to break the deadlock with the striker rising highest to steer Jorge Grant's corner past Lee Burge on the hour.

But the visitors hit back with substitute Jordan Ponticelli flicking in an equaliser in the 85th minute to seemingly grab a point for Mark Robins' men.

Notts though, are made of stern stuff and immediately re-took the lead with Forte turning in Shola Ameobi's low cross to seal an important win for the Magpies.

The opening 20 minutes of the game passed without incident as both sides held firm at the back, giving little away to one another.

But it was Notts who would have the first chance as Grant fired wide from 12 yards after collecting Ameobi's lay-off before Coventry defender Rod McDonald fired high and wide at the other end.

Tom Bayliss saw a shot deflected wide for the visitors and McDonald was wildly off target with a volley as clear-cut chances came at a premium during an attritional first half.

Coventry's 21-goal striker Marc McNulty almost found himself one-on-one with Adam Collin but his first touch let him down and the ball ran through the goalkeeper with both sides struggling to make inroads in the final third.

A clipped pass forward found Jonathan Forte haring away and the striker made enough room to get a shot away but it lacked sufficient power to cause any trouble to Coventry stopper Lee Burge, who gathered comfortably.

Coventry striker Max Biamou fired a warning shot from 25 yards which flashed over the crossbar with the final chance of the half and talked his way in to the referee's notebook as the teams left the field for half-time.

Not willing to risk a second yellow card for the Frenchman, City boss Mark Robins replaced him with Jonson Clarke-Harris during the break following a goalless first 45 minutes.

As with the first half, it was the Magpies who threatened to open the scoring with Burge forced into action by Forte's powerfully-struck effort in the opening minute.

There was a flashpoint soon afterwards as Noble and Coventry captain Michael Doyle tangled in the middle of the park, leading to a fracas between both sides. Noble, Ameobi and McDonald were all booked for their part in the incident.

The chaotic nature of the game led to a raucous atmosphere inside Meadow Lane and the roof almost came off the stadium when County opened the scoring on the hour.

Grant's corner was met by Forte, who expertly guided his header in to the bottom corner to put the Magpies ahead with his seventh goal of the season.

Nolan's men were in the ascendancy and were the width of a post away from doubling the advantage as Grant's shot cannoned back off the woodwork with Coventry on the ropes.

The Sky Blues responded, however, as half-time substitute Clarke-Harris saw a free-kick deflect narrowly wide of the target from 25 yards out.

Notts captain Michael O'Connor was brought on with 10 minutes remaining, replacing Noble for his first home appearance since suffering a serious knee injury against Portsmouth on 17 April 2017.

Ameobi came close to scoring a second for the home team, volleying wide after the visitors failed to clear a corner and Notts were made to pay as Coventry found an equalising goal with five minutes remaining.

Collin pulled off a fine save amid a scramble inside the Notts penalty area but, despite some heroic defending, the back line could not clear and Ponticelli's flick crept agonisingly in to the bottom corner to get City back on level terms.

But parity lasted barely 90 seconds as Notts immediately went up the other end of the field and re-took the lead.

Ameobi burst away from his marker and his low cross was turned in by Forte from eight yards out for his second of the afternoon to send Meadow Lane delirious.

Despite incessant pressure from the visitors in the five minutes added on by the officials, the defence stood firm to hold out for a vital victory.